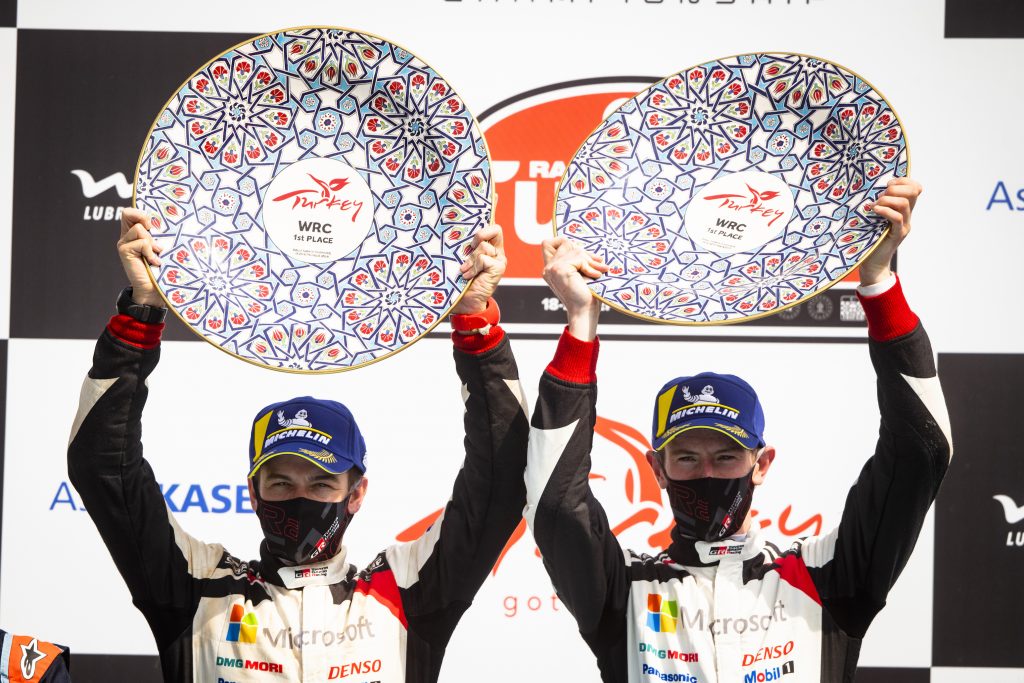 Toyota Gazoo driver Elfyn Evans and his co-driver Scott Martin emerged victorious on Sunday after three days of gruelling racing in Marmaris, to win Rally Turkey 2020 in a time of 2.43.02.7.

Belgium’s Thierry Neuville came second, 35.2 seconds behind Evans, and France’s Sébastien Loeb and 9-times world champion was third, a further 24.2sec adrift. Both drivers had lost ground on the final day of the race with punctures.

This year’s rally was a day shorter, with the race contested over twelve special stages and a total competitive distance of 223 km (138.57 miles) – 87 km less than last year.

Evans’ main competitor and championship leader Sébastien Ogier retired in the penultimate stage due to engine problems. It meant Evans was propelled back to the top of the Drivers’ Championship, opening up an 18-point lead.

Starting the final day in fourth, Evans eased his Toyota Yaris across a difficult rock-strewn stretch that marked the opening speed test. The Welshman grabbed the lead after his rivals were delayed by punctures, and he remained in front for the remaining three tests to claim his third career victory.

Evans, 31, now leads the World Rally Championship on 97 points after five rounds, with Ogier on 79 points, and reigning world champion Ott Tänak, who crashed out of Rally Turkey on Saturday, on 70.

There are two more rounds of the 2020 Championship left: Italy in October, and Belgium the following month.

The final day of Rally Turkey saw 130 drivers from 19 countries participate. Set in the Aegean province of Muğla on the southern coast, the race travels around gravel roads, making it the slowest and roughest event on the calendar.

The dusty terrain is even harder to navigate in hot conditions, as it was this year, turning Rally Turkey into the endurance test of the season for both the drivers and the vehicles.

The Marmaris race was the thirteenth edition of Rally Turkey, and the third consecutive year it has featured on the FIA World Rally Championship calendar.