Çiğdem Aslan: making her mark in the world of music 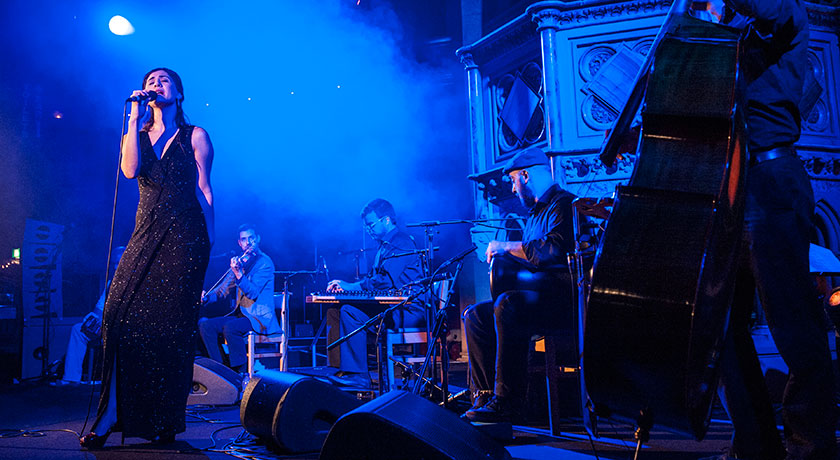 It’s been an incredible 12 months for Çiğdem Aslan. Described by the Guardian as, “one of the best British-based discoveries of the year”, she released her debut album Mortissa last October to critical acclaim in both the UK and in her native Turkey. Among her many achievements this past year was to be nominated in Songlines’ Best Artist category alongside World Music legends Manu Chao and Mulatu Astatke.

Her musical repertoire reflects the cultural mosaic she is part of. Previously best known as the lead vocalist of Balkans band She’Koyokh, the soulful singer has a way of connecting her audiences to songs even where we don’t understand any of the words. T-VINE caught up with Çiğdem just before she embarked on her recent 12-date tour of Britain.

How did you get into music and what did your family make of your career choice?

“I don’t remember ‘getting into’ music; it was there all the time. Music is a very important element of Alevi culture, which relies heavily on the oral tradition. I was born into this. My brother played bağlama (a long necked lute) and there was always gatherings [at home and at school] involving music that I took part in. I started performing at a different level when I joined a band at university and since then I decided to pursue it as a career. At first my family didn’t realise how passionate and serious I was about it, so my father kept telling me to come back to Turkey to do my job teaching English. But after the release of my solo album and the response it got, they started to appreciate my efforts more.”

The youngest of four siblings (two older sisters and a brother), Çiğdem was born in Istanbul in 1980 to Kurdish parents. She moved to London in 2003 to further her studies and ended up staying. One of her sisters and her brother were already settled here, so the transition was relatively easy. The dark-haired, slim singer describes how she grew up on a diet of folk music. Traditional Alevi music artists such as Arif Sağ and Mahsuni Serif, along with older recordings in Kurdish and Turkish by local musicians were regularly played in her family home. Western sounds initially came by way of family interventions: her sisters introduced her to Tracy Chapman and Joan Baez, while a cousin took the teenage Çiğdem to a Chris de Burgh concert where she first heard Lady in Red, which she sang to herself for a while afterwards. When she was 13, a family friend bought her a cassette by Levent Yüksel – his debut album Med Cezir – which she listened to a lot. She also loved the sounds of composer and musical pioneer Erkan Oğur. Collectively, these artists helped shape her awareness of the world of music.

Which artists do you listen to today?

“Nowadays I love listening to old Jazz vinyl from the 1930-50s era; artists like Ella Fitzgerald, Billie Holiday, and Julia Lee. I find their lyrics and style of singing amazing. Also on my playlist is Amalia Rodrigues – the Queen of Fado. I also listen to bands like the White Stripes, Muse, the Cranberries, and singers like Adele, Bjork, and Amy Winehouse.”

Her musical projects, performing as a guest vocalist for multiple musicians and bands, have given her an opportunity to study old Greek, Balkan and Kurdish recordings, broadening her repertoire. She regularly sings to Balkans music, which she says, “doesn’t feel like a stranger: although I didn’t understand the language or poetry of the music at first, I can relate to it”. It is the ability to go beyond the immediate, exploring the similarities and differences of the Folk genre in other languages that most fascinates her.

For her first musical release, Çiğdem beautifully reworked the rebetiko and smyrneiko sounds of the 1920s and 30s. She sings effortlessly in Greek, Turkish and Kurdish in both her studio recording and live renditions, her sublime vocals and theatrical stage persona perfectly suited to these once-outlawed songs of the Aegean, which were highly popular with the underclass in the hash dens and music houses of Athens and Istanbul during one of the most turbulent periods in the two countries’ history.

You’re not Greek or from Izmir, so how did rebetiko form the crux of your debut release? “I started singing Rebetiko/Smyrneiko about 15 years ago as part of a project. What I love about the style is that it is simple yet full of depth. The songs tell you stories and you don’t need to understand the language or to come from the same background to feel it.”

The lead character on the album is Mortissa (‘a strong independent woman’), who takes the form of a storyteller. Çiğdem describes her as, “the incarnation of not just me but all the women around me; my mother, sisters, friends, colleagues…”

The track listings for Mortissa are either by anonymous writers or those composed by musicians who subsequently had to leave their homeland, their songs full of memories of the life they had left behind in Anatolia. She worked closely with Nikos Baimpas, her band’s kanun player, who served as Mortissa’s musical director, producing most of the arrangements on the album.

Claiming she is neither a rebel, nor a conformist, Çiğdem’s playful side and that of the rebetiko style is fully evident on the album: one song is about Katerina who makes great meatballs, another about two lads selling leeks and who are worried about the police, while one is about a woman who tells her cheating husband that she’s off to spend each night with a different butcher!

Her ability to bring the Aegean Blues to a whole new audience prompted Making Tracks to claim Çiğdem is “creating the same kind of buzz about rebetiko as Mariza did for fado, Yasmin Levy did for Ladino song, and Amira for Bosnian Sevdah.”

Her creativity is not just limited to music. For the past two years, she’s also run Flying Goats, a vintage shop in Stoke Newington, with close friend Sevil Kotan with whom she has recently started to collaborate writing song lyrics. The shop name came from Sevil having a ‘flying mind’ and Çiğdem being a Capricorn. She says, they are not business-minded and are mainly running the shop, “for the fun of it”, which has become a cool hangout for friends old and new who come to check out the rare vintage items they stock.

The singer remains rooted to Hackney, a major hub for the UK’s Turkish-speaking community and where Çiğdem has lived since she first moved to London. She says she enjoys the diverse mix of people and the area remains a big draw for those in the creative industries.

What’s so good about Hackney?

“I love hanging out in the cafés and restaurants, and there are plenty of live music venues and events. Nowadays you get to hear more different languages spoken and see different kind of shops restaurants opening due to the gentrification of the area, but you also see how expensive it has become, forcing some of the young creative people to move out. Although the nice cafes, restaurants, galleries, vintage shops, etc bring a certain quality to the area, the increase in rents is not fair.”

When asked what her personal highlights of the past year have been, she replies: “Hearing my music played out loud at one of my favourite music stores in Istanbul. It’s where I usually buy CDs and books. I heard it as I was passing by, so I went in to the store and asked who it was and was told it was one of their best sellers.”

An independent woman making her own way in the world, Çiğdem Aslan deserves all the success and recognition her career will inevitably bring.