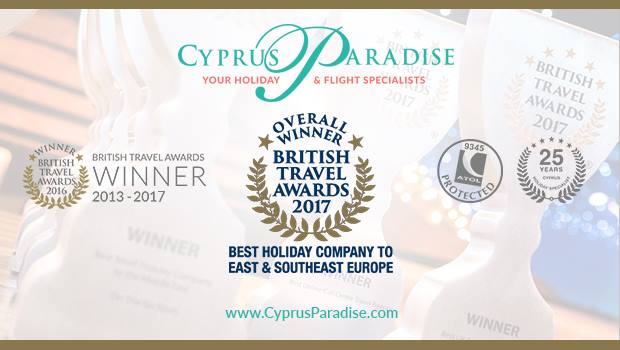 North Cyprus’ leading tour operator was named the ‘Overall Winner’ in the Best Holiday Company to East and Southeast Europe category at the 2017 British Travel Awards on Wednesday night. Cyprus Paradise picked up its trophy at a glittering awards ceremony in London attended by nearly one thousand travel professionals.

Their Gold prize at the annual British Travel Awards (BTA) was one of 147 presented on the night, each one decided entirely by a public vote. The event organisers said that more than 700,000 votes had been cast by consumers this year. Afterwards, Mr Yasarata wrote on his Facebook page that the travel prize “means a lot to us”.

At a time when many other British travel businesses targeting North Cyprus and Turkey have folded, Cyprus Paradise continues to perform well. Now over a quarter of a century old and currently operating out of its Green Lanes, Harringay, premises, the tour operator flies more British passengers to North Cyprus than any other.

Another North Cyprus specialist tour operator, Direct Traveller, was runner-up in its category of Best Special Interest Traveller. Thanking those who voted for them, the company posted on its Facebook page that the result was “an excellent way to celebrate 15 years”