The international community has joined the Turkish government in condemning the Egyptian authorities after four staff members from the Anadolu Agency (AA) were arrested and taken to an unknown location by Egyptian police in a raid on the news agency’s Cairo office on Tuesday night.

AA said police officers stormed the office, cutting off security cameras and the internet connection as they searched the premises. Officers also seized the passports, mobile phones and computers of staff. The officers involved refused to disclose the reason for the raid to a lawyer working for the agency.

The detained staff members included Hilmi Balcı, a Turkish national who is responsible for the office’s finance and administrative affairs, and Egyptian citizens Hussein al-Qabbani, Hussein al-Abbas and Abdelselam Muhammad, who is an employee of the Turkey-based Foundation for Political, Economic and Social Research (SETA).

A female Egyptian journalist who was at the office was released at midnight, while four others were taken to an unknown location early on Wednesday morning.

Presidential Spokesman İbrahim Kalın slammed the raid and detentions in a tweet, describing them a “blatant violation of law and human rights,” while urging the immediate release of AA staff.

A statement by the Turkish Foreign said the detentions were “without reason” and constituted “an act of harassment and intimidation against the Turkish media.” The ministry “strongly condemned” the incident.

UN spokesman Stephane Dujarric said his colleagues were in contact with the Egyptian officials “at various levels”, urging them to adhere to international human rights treaties.

“We are aware of the reports that Egyptian security forces raided Anadolu [Agency] offices in Cairo and reportedly arrested four journalists, including one Turkish national. They’ve been detained in an unknown location,” Dujarric told reporters in New York on Thursday.

A spokesperson for the U.S. State Department said the country was aware of the reports regarding the detention of Anadolu Agency employees.

“If true, we call on the Egyptian government to release the detained journalists and allow for a free and open press in Egypt,” said the spokesperson.

The German Foreign Ministry also joined the chorus of criticism.

“The German Foreign Office is concerned over the search of Turkish news agency Anadolu’s Cairo office and the arrest of four employees,” a Foreign Ministry spokesperson told Anadolu Agency.

The International Federation of Journalists (IFJ) said in its statement: “We strongly urge the Egyptian authorities to release all jailed media workers and to respect press freedom. No journalist should fear punishment for reporting the news.” 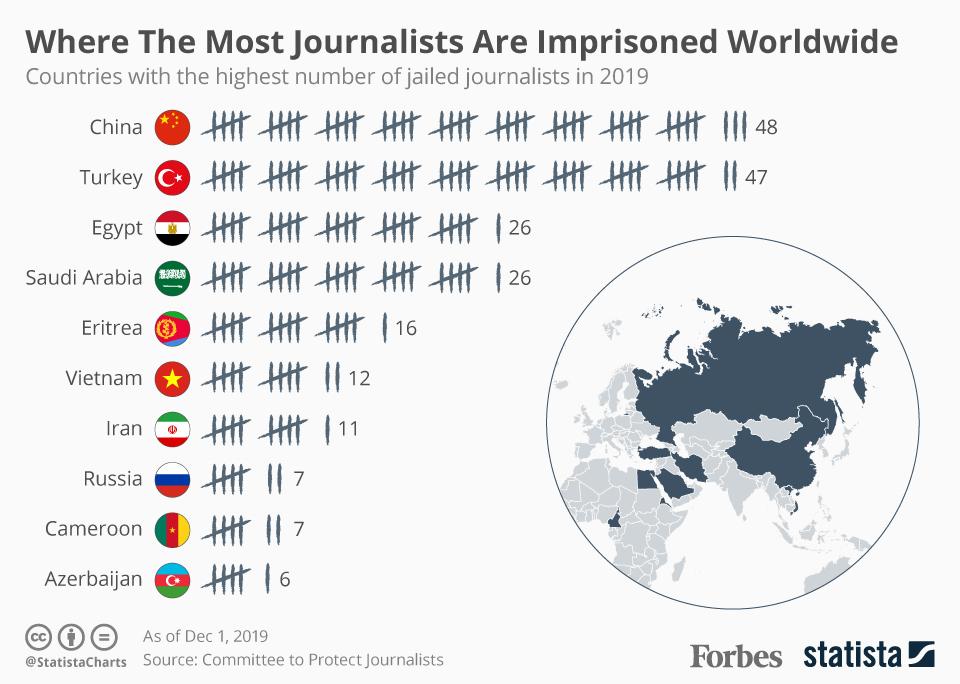 Egypt’s State Information Service (SIS), part of the country’s Ministry of Interior, hit back in a statement of its own, issued on Thursday, clarifying why the raid took place. It accused AA of publishing misleading news with the aim of “destroying the pillars” of the Egyptian state.

The statement further added that AA “negative” press reports regularly contained “false and fabricated” information about the political, economic, security, and human rights situation in Egypt that were used by Turkey to “distort the image of the Egyptian state on the internal and external levels”.

The Interiors Ministry also claimed the AA staff and office had not applied for accreditation, which is required for all foreign correspondents. They pointed to the fact that there were “over 300 accredited foreign media offices in Egypt and around 1500 accredited, resident journalists and correspondents, in addition to an average of about 100 visiting journalists per month on average”.

They further stated that, “Throughout the past six years, none of these foreign correspondents were prevented from performing his or her professional duties”.

According to local press reports, Egyptian Attorney General Hamada El-Sawy has decided to release all five defendants, including three Egyptians who were fined LE 10,000, and two other Turkish nationals, among them Hilmi Balcı, who were handed to the embassy to be deported. They arrived in Turkey earlier today.

Turkey and Egypt rank in the top three countries for the highest number of jailed journalists. According to Statista, China tops the 2019 list with 48 journalists jailed, Turkey drops from 68 in 2018 to 47 in 2019. Egypt ties with Saudi Arabia in third place, with both countries detaining 26 journalists last year.