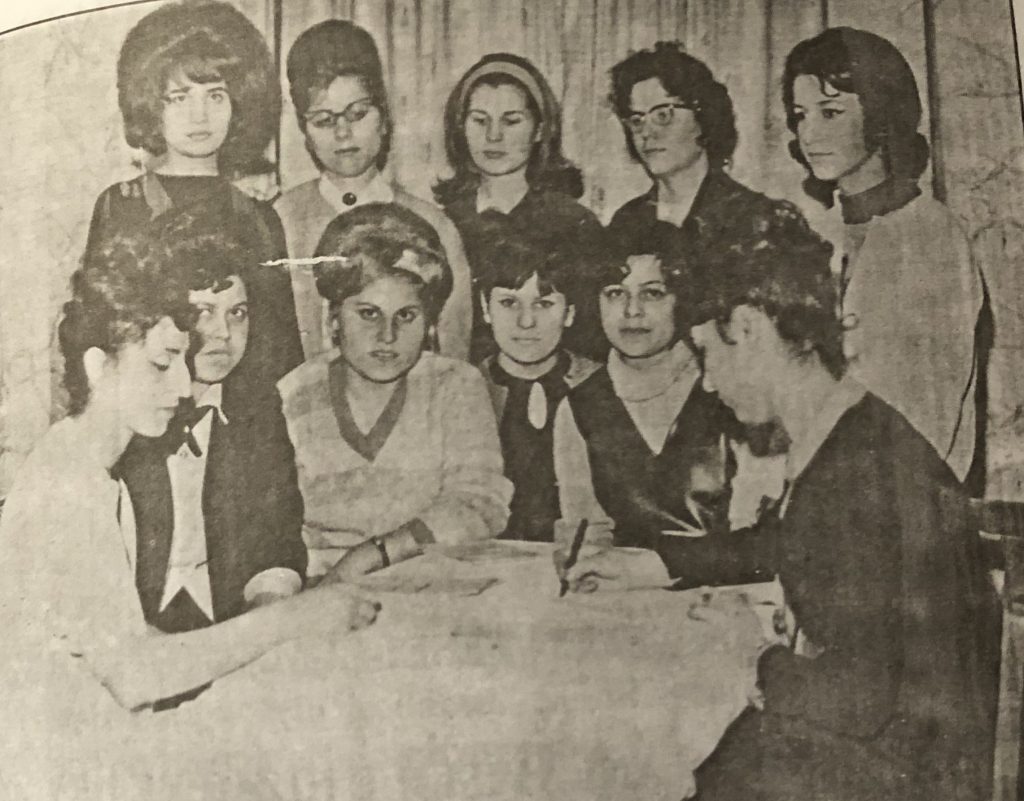 Muazzez Suzan Hamit, one of the British Turkish Cypriot community’s key activists during the 1960s and early 1970s, has died in London aged 76.

She had been battling with serious ill-health for a number of years and was rushed to Whipps Cross University Hospital late on Friday night, after being taken ill at home. Despite the medics’ best efforts, she was pronounced dead shortly after midnight, Saturday 20 July.

As a young woman she spearheaded a group of female Turkish Cypriot volunteers in London, who came together in the wake of the outbreak of the Cyprus Conflict in 1963 to provide humanitarian aid for the thousands of Turkish Cypriots who were forced out of their homes.

Then known by her maiden name Muazzez Halil, she was elected chair of the Women’s Aid Committee (WAC) in 1964. Working with their male counterparts via the  D’Arblay Street Turkish Cypriot Community Association (‘Kıbrıs Türk Cemiyeti’), the WAC volunteers offered a vital link between the London-based community and their friends and family in Cyprus.

The WAC created and distributed Yardım Postası (Aid magazine), and arranged regular meetings to keep the local community informed about events back in Cyprus, and to raise essential funds for urgent aid, from foodstuffs such as baby milk to medical supplies. It was during this time that she met her future husband Oktay Hamit, who headed the Men’s Committee.

The young activist from Baf/Paphos was also involved in the political campaign for Turkish Cypriots. She served as the secretary of the then exiled Turkish Cypriot leader Rauf Denktaş whenever he was in London. She also helped organise central London marches to highlight the plight of Turkish Cypriots, and lobbied the British government and foreign embassies to stop the assault on the community in Cyprus.

In 1974, she led a group of women who stormed The Sun’s offices after it published the highly offensive front-page headline ‘Barbarians’ following Turkey’s lawful intervention in Cyprus on 20 July. The article claimed alleged atrocities by Turkish forces, while spectacularly omitting all suffering by Turkish Cypriots. Mrs Hamit and her fellow protestors demanded a written apology from the paper’s editor for its racist and inflammatory headline, which came a few days later.

With two young children, Mrs Hamit called time on her years as a volunteer activist after 1974. However, she continued to support the cause where she could.

In 1998, she organised a protest by women against the European Union outside the TRNC Presidency in Lefkoşa. The demonstration targeted the European Commissioner for External Relations and Enlargement Hans van den Broek, who was visiting President Denktaş at the time.

Together with a dozen mainly elderly women, Mrs Hamit prevented Mr van den Broek’s car from reaching the presidency until he exited his vehicle to hear their demands and to take receipt of a letter calling for an end to the EU’s exclusion of Turkish Cypriots. The protest made headlines in Turkey as well as Cyprus.

In later years, she supported the work of human rights group Embargoed!, co-founded in 2004 by her daughter Ipek Ozerim, attending their Gagged in Brussels protest. In a rare show of joint action, demonstrators from both London and North Cyprus descended on the European capital to demand an end to the international isolation of Turkish Cypriots.

Born in Ay-yorgi village in 1943, Muazzez grew up in nearby Baf / Paphos when Cyprus was still under British colonial rule. The youngest of five children, she was raised in a humble home during the Cyprus Emergency. Family friend and neighbour Sgt Abdullah ‘Çavuş’ Alparslan was the first Turkish Cypriot to be killed by Greek Cypriot terror group EOKA in 1956; seeing his body had a profound effect on the young Muazzez, as did the EOKA bombing of a British military vehicle passing in front of her as she went to school, resulting in many casualties.

Visiting London as a teenager in 1958, she attended a massive demonstration by Turkish Cypriots who were demanding ‘Taksim’ (separation) in Cyprus, after they became the target of militant Greek Cypriots keen to oust the British and turn Cyprus into a ‘Greek’ island. Muazzez’s school teacher and one of the event organisers spotted her in the crowd and invited her to recite a patriotic poem in Turkish. With each verse she spoke, the cheers and chants of the crowd became louder.

In her personal life, she bucked the social trend of marrying early (her older sister Salise had married at fifteen) by insisting on gaining an education. Fluent in three languages (Turkish, Greek and English), after completing high school she secured a job as a civil servant in the newly established Republic of Cyprus, and was posted to serve as a junior secretary in the Cyprus High Commission in London. She worked there for just over three years.

When the Cyprus Conflict started in December 1963, her family was directly affected. Greek Cypriots mounted a vicious attack on Turkish Cypriots to seize control of the government, with Muazzez’s oldest brother Fuat, a policeman, among those to go missing during the ten-day period known as ‘Bloody Christmas’.

In the era before household telephones and instant communication, Muazzez, like her Turkish Cypriot co-workers, returned to work at the High Commission after the Christmas break anxious for news about the fate of their relatives and the situation in Cyprus, unaware that the conflict had been instigated at the very highest levels of government by Greek Cypriots.

A terse exchange with High Commissioner Sotiriades, who told her in Greek, “What do I care if another Turkish dog has gone missing”, led to a mass walkout by the Commission’s Turkish Cypriot staff. All bar two refused to work at the Cyprus High Commission again.

Eventually, through the paid aid of the Red Cross, Muazzez located her brother Fuat. He was severely malnourished and had been badly tortured by his Greek Cypriot captors, who believed he held information about the Turkish Cypriot defence force TMT. Other relatives of hers were not so lucky.

She spent the vast majority of her life in London, turning her hand first to business and later working as a book-keeper for a Turkish Cypriot accountant friend, Hasan Akin.

In accordance with her wishes, her funeral will take place in the Turkish Cypriot capital Lefkoşa at lunchtime on Friday, 26 July, when she will be laid to rest at Lefkoşa Cemetery.