Hus Vedat on the recipe to success 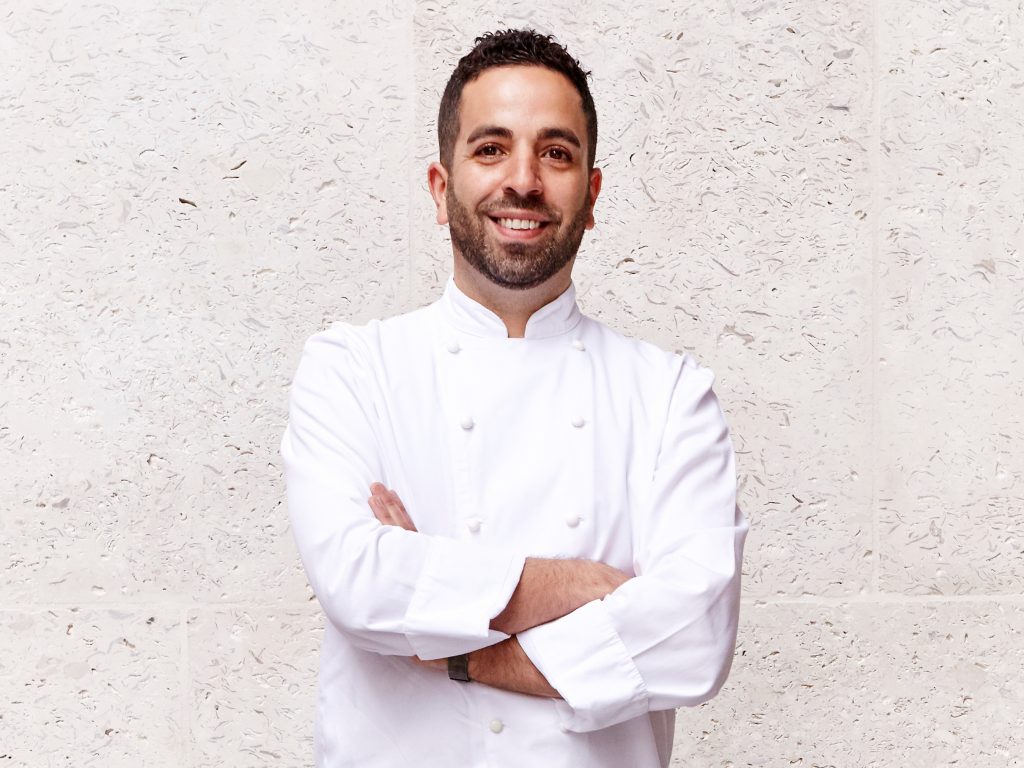 Hus Vedat is a ‘Hackney boy done good’. Along with partners Levent Büyükuğur and Sanjay Nand of The Good Food Society, the 41-year-old Executive Head Chef runs two West End restaurants. In a short space of time Yosma and new venture Hovarda have helped push the boundaries of what we have come to expect of Turkish cuisine.

We meet in Yosma, a cool modern ‘meyhane’ in the heart of Marylebone. Hus is confident and charming, but initially exudes a tough exterior. The armoury soon comes down as in time-honoured fashion we share our Turkish Cypriot credentials. Both our mums are from Baf (Paphos), and Hus’s dad is from Isklele. His maternal nene was an “amazing cook”, serving up traditional Turkish Cypriot fare such as bezelya (peas), börülce (black eyed peas), bulli magarına (chicken macaroni) and kolokas (colocasia).

An only child, Hus was born in Hackney. Soon after the family uprooted to Palmers Green where Hus still lives, now married with 9-year-old twins, who determine “his social life”.

He was introduced to the food industry at a young age through Seagraves, a traditional butcher’s shop in Wood Green that his parents ran for 35 years before selling it in 2015. From sweeping up saw dust to accompanying his uncle to Smithsfields Market, Hus acquired an expert understanding of handling meat early on in life.

Hus Vedat on working at the Hilton London Metropole: “It was a military operation. There was discipline, organisation and structure”

After leaving school, he opted for the vocational route, studying Hotel Management and Catering at Brighton University, where he excelled.  In Hus’ own words, he was “self-driven and still thirsty for knowledge”. Getting a job as a demi chef under Nigel Frost at the Hilton Metropole was a pivotal moment in his life. He was thrust into a huge catering operation, dealing daily with 3,000 covers as they fed the hotel’s overnight guests and cooked for banquets.

“It was a military operation”, explained Hus. “There was discipline, organisation and structure. The business element has to be tick-tock: ordering, rosters, health and safety. [It was] more clipboard than cooking.”

He remained at the hotel for three and a half years, where he was promoted to sous chef. Eager to broaden his experience, Hus set off to work in other kitchens, including at Britain’s most expensive restaurant The Fat Duck. It was when he was recruited to head up the kitchen at Caxton Grill, located within St. Ermin’s Hotel, Westminster in 2010 that Hus started to establish his reputation as a chef. Given free rein by the owners, within six months of the restaurant’s opening and Hus’ critically acclaimed modern British menu, the Caxton Grill received two AA Rosettes and a mention in the Michelin Guide.

After a little over three years, Hus moved on again, and while mulling over plans to open his own restaurant, “kismet” came knocking with a “monster opportunity”. Jamie Oliver asked Hus to run his Barbecoa Steakhouse in St Paul’s, allowing his meat-handling talents to come to the fore. Boasting 220 covers, the American diner regularly served 1,000 people a day. Hus’ association with a celebrity chef helped open other doors.

He left Barbecoa to join forces with another pioneering chef, Peruvian Martin Morales. The South American was making major culinary waves at the time, and during his brief stint as Group Executive Chef they added a third restaurant (Ceviche Old Street) to award-winning Ceviche Soho and Andina. Morales’ ability to take classic Peruvian dishes and give them a 21st Century makeover got Hus thinking about doing something similar with Turkish food.

Cue a chance meeting with serial restaurant entrepreneur Levent Büyükuğur and City banker-turned-investor Sanjay Nand. The pair were keen to add a Turkish eatery to their London portfolio, which includes high-end Italian diner Frescobaldi. An Istanbullu, Levent was confident a Turkish meyhane (tavern) concept would work in the British capital. The trick was which elements to keep and which to dispense with.

“This is a modern meyhane. The name ‘yosma’ means flirty, free-spirited and confident.”

“People get stuck with the old traditions, like fasıl (music). Yes, we love the meyhane in the backstreets of Beyoğlu, but that won’t translate to London,” Hus explained.

Pointing to the spacious restaurant’s contemporary monochrome décor and pink marble tops with cool illustrations on the walls, including one of psychedelic rock band BaBa ZuLa, he proudly states, “This is a modern meyhane. The name ‘yosma’ means flirty, free-spirited and confident.”

Yosma doesn’t do döner or lahmacun, and those expecting traditional Anatolian fare of the North London variety will be disappointed – as some online reviews from Turkish diners show. But for those of us after a culinary evolution in a cool cosmopolitan setting, Yosma is a delight. This upmarket rakı bar-cum-mangal eatery with chilled dance beats playing in the background offers a twist on well-known recipes. As he’s remarked elsewhere, Hus treats “fire as an extra ingredient” reflected in his delicate charring of octopus and the smoking of key Turkish ingredients like aubergine. Foodies, be prepared for tantalisingly fresh flavours!

Modernising palettes has continued in Hus’ second enterprise Hovarda (which means ‘rogue’) in Soho, which opened in November last year. Fashioned on Aegean (Greek-Turkish) fusion culture, the menu again reworks classic dishes, from crab-filled böreks to fırın kebab (kleftiko), which comes not as a whole leg, but as various cuts of lamb.

Hus Vedat’s Turkish heritage, his love of food (check out his Instagram profile for evidence) and early lessons in business have clearly helped chart his path to success. He’s setting the bar high – about time someone in the community did!