The election of Ersin Tatar as President of the Turkish Republic of North Cyprus (TRNC) last October resulted in a pivotal change in the Turkish side’s approach to the Cyprus Question: out goes any talk of a ‘federal’ solution to the divided island, replaced instead by a two-state policy.

Last month, the British Turkish Cypriot Association (BTCA) launched a new series of monthly webinars to discuss what this means to the future of Cyprus.

The BTCA has just announced the panellists for the second “What is the future for Cyprus?” online debate, which will take place on Wednesday 24 February.

Championing President Tatar’s new 2-state policy will be Oğuzhan Hasipoğlu. A lawyer by profession and an MP for the National Unity Party (UBP), Hasipoğlu is also a member of the new Turkish Cypriot negotiation team.

Constitutional law specialist Dr. Christian Heinze is the third lawyer on the panel. Dr Heinze brings his long years of experience of Cyprus legal affairs to the debate, having previously served as Assistant to the President of the Supreme Constitutional Court of the Republic of Cyprus in 1963, when the conflict first broke out. 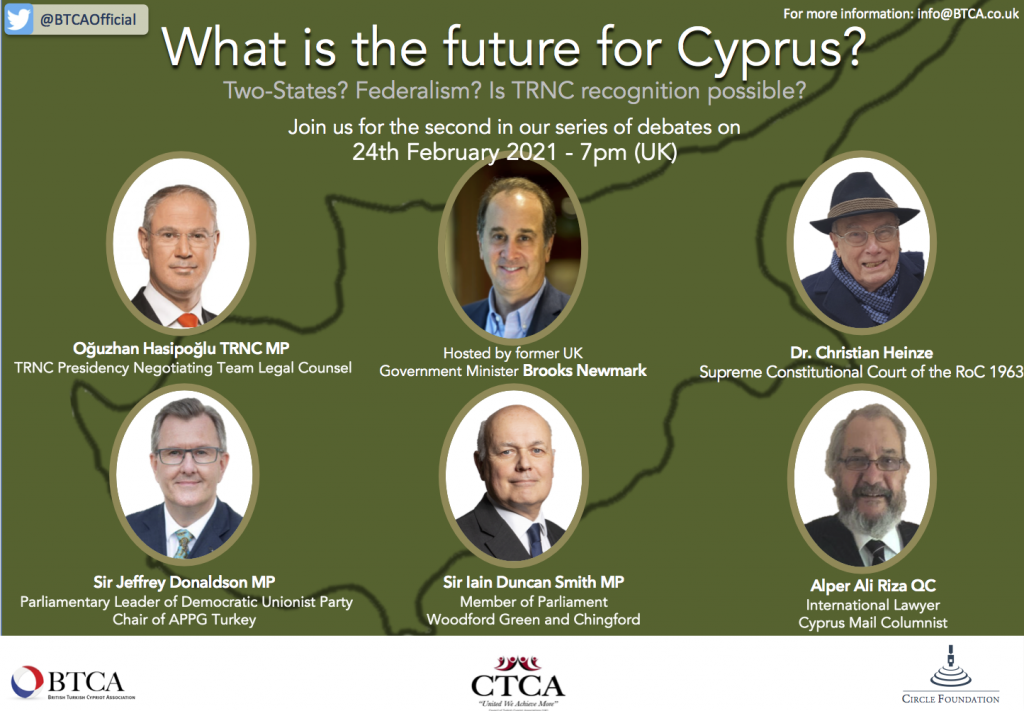 Topics of discussion for this webinar are likely to include the obstacles to international recognition for the TRNC, the first draft of the UK’s confederal plan for Cyprus, which is currently being road-tested, the impact of Turkey publicly backing a 2-state solution, and the expectations from the upcoming 5 +1 UN informal talks, which will be attended by the two Cypriot sides and three Guarantors Britain, Turkey and Greece, along with the UN.

The 90-minute debate is being screened on Zoom, where 500 pre-registered viewers can not only watch, but also ask questions to the panel.

Those in North Cyprus or Turksat viewers across Europe, including the UK, can also watch the debate live on television, with three channels screening the debate.

BRT 1 will have simultaneous translation for Turkish viewers. BRT 3 and Kanal T will broadcast the debate live in English.

BTCA’s webinars are supported by the Council of Turkish Cypriot Associations UK (CTCA) and think tank the Circle Foundation.

Event Place:     Webinar/online on Zoom. Prior registration is needed, and viewers need to download the Zoom app. Click here to register.