Investigation into cause of crash, as 3 confirmed dead on Pegasus plane in Istanbul 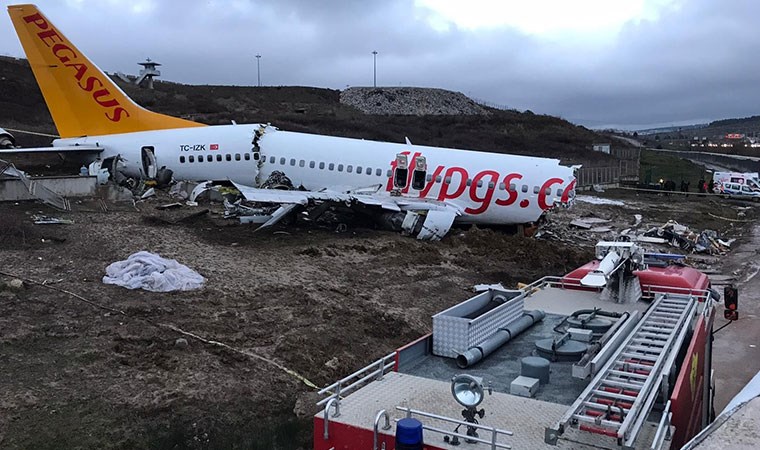 Istanbul prosecutors have launched an investigation into a plane crash at Sabiha Gokcen airport on Wednesday evening, which killed three people and injured 180.

A total of 177 passengers and six crew had been on board the Pegasus Airlines Boeing 737 plane, flight number PC 2193 from Izmir Adnan Menderes Airport.

The majority of passengers were Turkish, although local media said they were informed by the airline that 22 of the passengers were foreign originating from 12 different countries. Twelve children were also on board.

The plane landed at Istanbul Sabiha Gökçen Airport at 18.18 local time, but skidded off the runway and down a bank, where the plane broke into three parts. The aircraft was trying to land in heavy tailwinds and rain.

Istanbul Governor Ali Yerlikaya told press that the plane had “slid some 60 meters “after coming off the runway, and then “fell about 30-40 meters” down a bank.

He attributed the accident to severe weather conditions which, he said, “could have had more serious consequences.”

The cockpit and front of the plane came apart from the bulk of the fuselage, while a large fracture appeared at the rear of the aircraft.

This is why cabin crew are on board aircraft.
This is our main purpose; our reason to be there.
Luckily, we don’t have to be put to the test -in most cases- not once during a long career as flight attendants.#Pegasus pic.twitter.com/KvirELXlOO

Turkish broadcasters captured the badly damaged plane, which had caught alight following the crash, as firefighters tackled to put the blaze out and help free trapped passengers.

Sabiha Gökçen Airport was closed after the incident and flights diverted to nearby Istanbul Airport. The airport has since re-opened.

A press statement from the airline offered its condolences to the victims of the crash:

“Pegasus Airlines shares in the profound sorrow of all the people affected by this tragic accident. Above all, we would like to express our profound sympathy and heartfelt condolences to those families and friends who have lost loved ones.

“Our injured passengers continue to be treated in hospital and we wish them all a swift recovery.

“We are deploying every resource to support those affected by this accident,” the statement added.

At a press conference earlier today Mehmet Tevfik Nane, the general manager of Pegasus Airlines, said the plane’s black boxes had been removed for investigation.

Noting that plane accidents could be caused by multiple factors, Mr Nane said the cause of the fatal crash would be determined detailed technical examinations of the aircraft and its black boxes.

“All our pilots are encouraged not to take risks, to take a stable approach, to abort landing on the runway if there is a risk and to continue to another airport when necessary. These practices are audited annually by the General Directorate of Civil Aviation,” Mr Nane said.

“Our planes are young aircrafts with high technical average, with an average age of 5.3 [years] and the maintenance of these aircrafts are in accordance with the regulations” he added.

Pegasus Airlines has been flying for 20 years. Flying to 72 international destinations, it has a fleet of 83 aircraft (47 Boeing and 36 Airbus), according to its website.

Last month, a Pegasus Boeing 737 flying in from Sharjah in the United Arab Emirates also skidded off the runway at Sabiha Gökçen Airport. There were no casualties, although the airport was temporarily closed.

In January 2018, a Pegasus Boeing 737-800 came off the end of the runway and slid down an embankment at Trabzon Airport, which by the Black Sea. The aircraft came to within meters of the water. Miraculously no passengers or crew were injured in the incident.