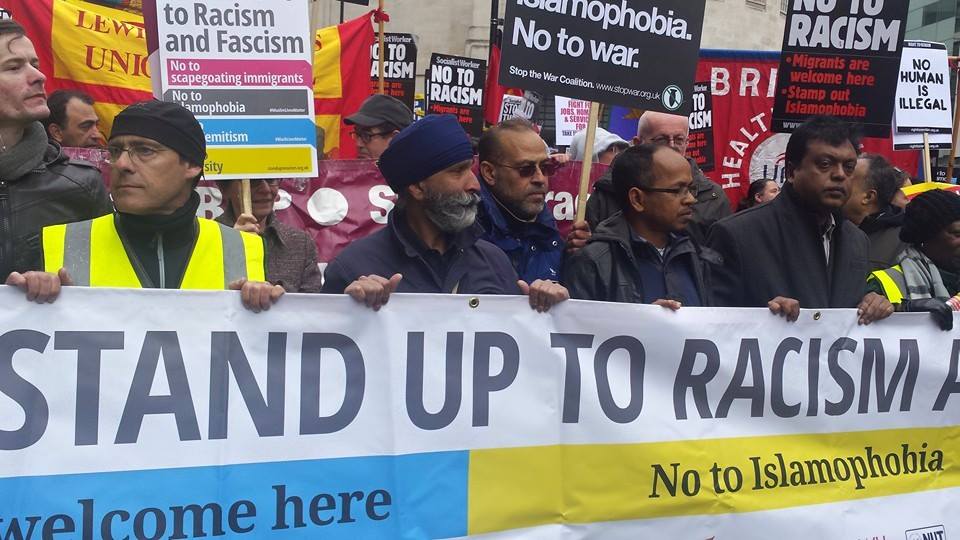 A bitterly cold March day. Only yesterday [Friday 20th], on a warm, sunny day I sat on a park bench at Ally Pally and watched little children feed the ducks. This is England. It is possible to witness a few seasons in a few day.

I leave home, my wife’s warnings to be careful ringing in my ears. My destination is Portland Place, outside the iconic BBC Television Centre. I arrive there very early. I stroll to a nearby café. I curse myself for not taking my woolly cap with me. In the warmth of the café, while sipping my not-so-hot coffee, a hand touches my shoulder. The friendly, smiling face of my dear friend, Fevzi [Hussein], the Chair of Embargoed! and a union activist.

We meet a huge crowd gathered around the BBC building. Union members, students, older people, young people are all congregated in large groups. Some are distributing or selling their papers and other publications, some try to organise their groups in a disciplined way. Some are vying for strategically prominent positions in front of masses of media photographers.

A cacophony of noise fills the area. Whistles ring in our ears. It is great to see so many young people, most of them students, in the crowd. It is also pleasing to see the majority of the crowd comprising white people – the people who are least affected by racism and discrimination. Some familiar, old faces are also there: black, white, Asian. Tired faces. But these activists are never tired of promoting anti-racism and anti-discrimination. You are guaranteed to see them at every event.

Saturday 21 March 2015. Today is the UN-designated International Day for the Elimination of Racial Discrimination. Marches and other events are organised around the world. An important, symbolic day. It is a day of awareness-raising on racism and discrimination. We have gathered together to show solidarity with each other. To say to those political parties terrified by the rise of UKIP: “We are here too. Our voice is very strong too”.

It’s been a strange seven days. At the beginning of the week I watched a chillingly terrifying television programme – ‘Britain’s Racist Election’ – screened on Channel 4. Assisted by Enoch Powell, Peter Griffiths, a teacher and a Tory Party candidate, won the Parliamentary seat for Smethwick, Birmingham – regarded as a Labour stronghold – by running a racist campaign during the 1964 General Elections. During that year, around 5,000 immigrants from the Caribbean had settled in Smethwick. A woman who appeared in the programme said she was horrified to be met by such vicious racism. After all, she was “invited by the Queen”.

I was amazed to learn that the Birmingham branch of the KKK (Ku Klu Klax) was initiated around that time. Yes, in Birmingham England, not Alabama. I learned too that the great Malcolm X came to Smethwick to support the immigrant communities in their fight against the racists. Griffiths only lasted for 18 months. He lost his seat in the snap election called by Harold Wilson.

Last week, Nigel Farage advocated for the removal of anti-discrimination legislation. He reckoned there was no need for them anymore. Needless to say he was not able to intellectually support his argument. How could he?

Then on Thursday night, armed with two pairs of slippers to throw at the telly, I sat to watch Trevor Phillip’s programme. Phillips was almost apologising for being the champion of anti- racism. According to him, preventing people from expressing racist views, in other words ‘political correctness’, caused white people to fear being accused of racism if they spoke up. This, he claimed, had negative results for race relations and had led to serious consequences.

As an example, he cited the Victoria Climbie case. While Phillips may have some validity on this, he surely can’t blame little Victoria’s demise purely on the fear of speaking out? Sure, ethnic communities have some issues such as spirit possession to deal with, and deal with these they must.

Trevor Philip’s other example of crimes committed by specific communities only served to reinforce pre-existing stereotypes. He had no qualms labouring the crimes committed by ethnic communities, while conveniently skimping over those committed by the majority community. For instance, most child abuse cases are perpetrated by white people. The next day the Daily Mail declared Trevor as their hero of the decade. LBC was over the moon. They all felt vindicated. A title and pass to the Lords for Trevor? We’ll see.

An elderly disabled woman pleads with her daughter to let her walk at least a little with the crowd. Behind them, another three disabled women are being pushed by their carers. In a red coat, a little girl walks with her mother holding her hand and shouting excitedly: “No racism, no discrimination”. A woman wearing a turban, pushes her child’s pram. The child is carrying a placard with the words: “Stop Racism, Stop Islamophobia”. A few tear drops fall from my eyes, already watered with the effect of the cold.

We are passing through Regent Street, one of the richest streets in the UK. Tourists spill out of famous shops, carrying posh looking carrier bags, no doubt filled with items of famous labels. Some take photos with their cameras and mobile phones. The neon lighted Coca Cola advertisement board appears ahead. On the steps of the Eros statute a group of around 30 white men, representing white supremacist organisations wait for the marchers, waving their British flags and the flag of St. George. Their face contorted with hatred and red with fury. Eros looks down on them disapprovingly.

They are protected by at least fifty policemen. A group of marchers surround them and tease them by shouts of: “There are more of us”.

We finally arrive at Trafalgar Square. There we listen to a large number of speakers. I have to leave early. I meet Jeremy Corbyn on my way out of the Square. I chat a little with this great man, a politician I sincerely respect.

My friend Fevzi and I lamented earlier about the fact that we had come across so few members of our own [Turkish] community. I am reminded of Pastor Martin Niemöller’s words that begin and end as follows: 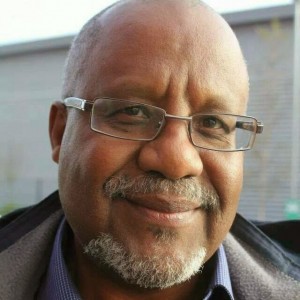