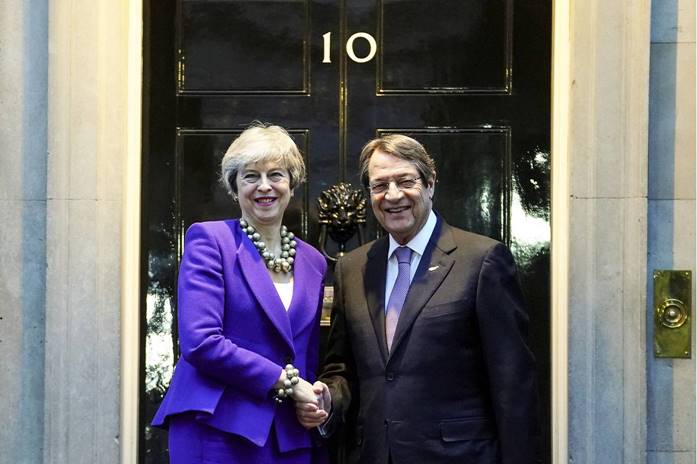 Britain’s position on Cyprus remains unchanged, its officials in Nicosia have stated, after Greek Cypriot leader Nicos Anastasiades claimed that Prime Minister Theresa May said the UK did not wish to continue in its role as a guarantor country.

Cyprus gained independence from the UK in 1960 following a campaign of terror by members of EOKA, which sought to annex the island to Greece.

In return Britain was allowed to keep large areas of territory, the Sovereign Base Areas (SBAs), which it still holds today.

The governments of the UK, Greece and Turkey also signed the 1960 Treaty of Guarantee, which gave each country the right to intervene, unilaterally if necessary – as Turkey did in 1974 to protect the Turkish Cypriots following a Greek-led military coup – while also respecting the “integrity” of the SBAs.

Greece and the Greek Cypriots have long called for the abolition of the system of guarantees, while Turkey and the Turkish Cypriots insist it is vital for their own security.

Following a “very constructive”meeting with Mrs May in London on Tuesday, Mr Anastasiades told reporters that the British PM, “most importantly”, had “reiterated the position that Britain would not wish to continue its role as a guarantor power”.

During a visit to Cyprus in November 2015, former British Foreign Secretary Philip Hammond said that the UK was ready to “consider any proposal” with regards to the guarantee system – but only if the island’s “two communities come to agreement about how they want to move forward”.

“We have no conceptions about how this should be done; we have no interest of our own in this process,” he said at the time.

“Our only interest is to facilitate a workable agreement between the two communities, so that there will be a settlement in the Cyprus question.”

British High Commission in Cyprus on guarantee: “nothing has changed in the UK position on Cyprus”

Mr Hammond’s comments were made in the context of the last bout of intensive international efforts to reach a solution in Cyprus, which ultimately ended in failure in July 2017.

But Mrs May’s alleged remarks this week appeared to have taken the UK’s position on the Treaty of Guarantee a step further.

Doubt was cast, however, over Mr Anastasiades’s account of his discussion with Mrs May, after a written statement from Downing Street made no mention of the guarantees issue.

It simply said that Mr Anastasiades had “updated the Prime Minister on the latest developments on the Cyprus settlement” and that Mrs May “expressed hope that progress would be made towards the resumption of talks”.

The statement also said that the two leaders “spoke about the close co-operation between their two countries and agreed to build on these strong ties in the future”.

@eltanh @1TVINE Nothing has changed in the UK position on #Cyprus. We are open to whatever arrangements the other parties can agree on security and guarantees.

“They looked forward to the conclusion of discussions, to allow for the implementation of the bilateral agreement that will enable Cypriots living in the [SBAs] to develop their land and businesses,” it said.

Asked to confirm or deny the comments attributed to Mrs May by Mr Anastasiades on the issue of guarantees, the British High Commission in South Nicosia simply said via its official Twitter account that “nothing has changed in the UK position on Cyprus”.

“We are open to whatever arrangements the other parties can agree on security and guarantees,” it added.

Zorlu Töre: “The Turkish Armed Forces are the only security guarantee of the Turkish Cypriot people”

MP and Deputy Speaker Zorlu Töre, of the country’s main opposition National Unity Party, responded on Thursday by saying that the Turkish Armed Forces were the “only safeguard of the Turkish Cypriot people”.

He accused Mrs May of “failing to understand the genocide the Turkish Cypriots had experienced” and that the presence of “British, French or US bases on the island could never be accepted”.

Mr Töre also said that Britain had “taken sides”in the Cyprus dispute by “failing to prevent Greek Cypriot aggression at any time”.