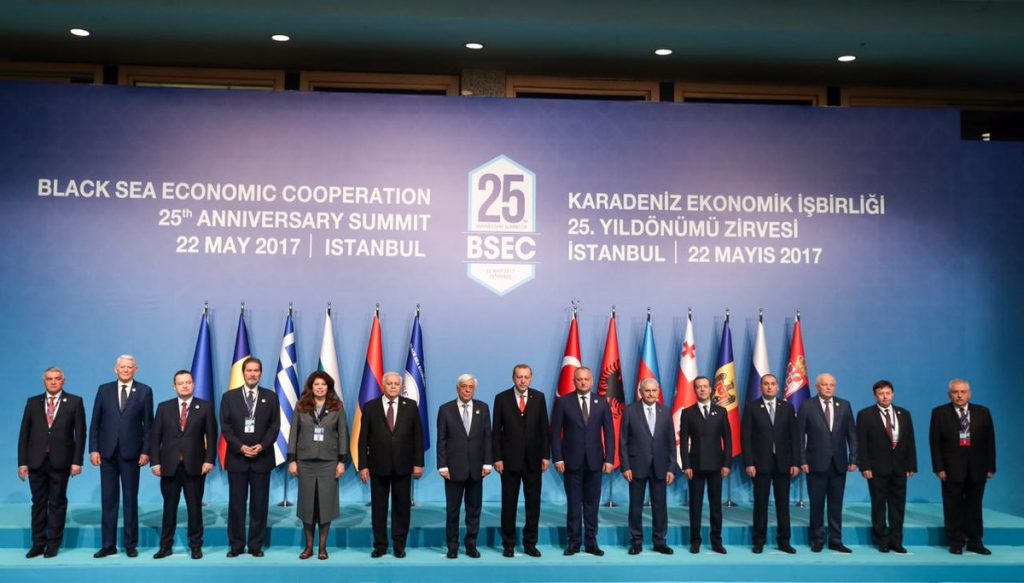 “Together, we all need to do more than we currently do for the Black Sea, which always gives us more than it takes from us,” said Turkish President Recep Tayyip Erdoğan in a call for stronger ties between Black Sea Economic Co-operation (BSEC) group member states on Monday.

Speaking at BSEC’s 25th anniversary summit in Istanbul, President Erdoğan emphasised the necessity of the organisation playing a greater role in improving the economic lot of the region’s population; he downplayed bilateral issues between members and emphasised common challenges, saying, “We may have political and even major problems among us. However, we should make sure that we keep our organisation away from those problems, only then we will be able to work efficiently and, in fact, we should do even more.”

“As member states, we may have different languages, cultures, political stances or economic levels. But at the end of the day, we have a common denominator that is the Black Sea, which brings us all together,” Erdoğan added.

After discussing the challenges shared by port workers across the region in areas such as Odessa, Batumi and Trabzon among others, he eluded to common opportunities for prosperity in the area saying, “If the tea producers in Rize of Turkey have a good season, likewise on the other side of the coast the tea producers in Sochi of Russia enjoy the same thing.”

Emphasising the importance of closer co-operation and infrastructural integration between BSEC partners “It is up to us, the member states, to make efforts to reinforce our co-operation under this umbrella,” the President said.

President Erdoğan: projects like the Black Sea Ring Road will “bring our people together”

Mr Erdoğan also encouraged other partners to work towards ensuring that the region meets its full economic potential by investing more in trade facilitating infrastructure projects such as the Black Sea Ring Highway project. He explained:

“We need to work more on projects that will make a difference in the daily lives of our people such as the Black Sea Ring Highway project — Turkey completed its part in that project 10 years ago. If other countries complete similar projects then we will have an established transportation network that can bring our people together around the Black Sea.”

Launched in April 2007, the Black Sea Ring Road project aims to improve transport connections for the region by building a four-lane highway system connecting the countries surrounding the Black Sea. When completed the highway will be 7,140 km long in total.

The countries participating in the project are Russia, Turkey, Georgia, Ukraine, Moldova, Romania, Greece and Bulgaria. Armenia, Azerbaijan, Albania and Serbia will also be connected to the road through additional routes.

The international nature of the project means a single budget was not allocated, with each country expected to pay for its own section through its own resources. However, the EU, and other international funding institutions such as the European Investment Bank (EIB) and the European Bank for Reconstruction and Development (EBRD), as well as the World Bank (WB) are supporting the ambitious venture.

Armenians and Azeris in war of words

Monday’s opening ceremony for BSEC started with some controversy. Ashot Hovakimian, the Armenian Deputy Foreign Minister (pictured below) was criticised by Mr Erdoğan for his comments about Azerbaijan and the unresolved Upper Karabakh dispute.

During his speech at the opening ceremony, the Armenian diplomat is reported to have said:

“The accusations, the rhetoric of war and the unilateral maximalist demands cannot in any way contribute to the resolution of the conflict. It would be possible to make progress on a resolution of the Nagorno-Karabakh conflict if Azerbaijan abandoned its policy of using force and sincerely engaged in negotiations in the format recognized by the Minsk Group of the OSCE.”

The spat continued when Azerbaijani Speaker of Parliament Oktay Asadov retorted that “one of the members of the organisation did not want to give up its toxic ideology and continues to demonstrate intolerance and aggression.”

A long-simmering conflict between Armenia and Azerbaijan over the disputed Upper Karabakh region escalated into war in 1988. The territory was captured by Armenian irredentists during the collapse of the Soviet Union and a ceasefire to hostilities was called in 1994, with negotiations for a lasting settlement continuing for the past two decades.

The Organisation for Security and Co-operation in Europe has been leading the negotiations to broker a permanent peace deal. In April last year the OSCE Minsk Group, co-chaired by Russia, France and the United States, confirmed that border skirmishes have escalated into the worst violence in the area since the ceasefire.

BSEC summit host Erdoğan told Hovakimian “I also agree with the statement saying BSEC should not be a centre of political accusation… but you have turned almost all of your speeches into a political evaluation.”

He continued, referring to the efforts of the Minsk Group adding that “These negotiations have been on-going for over 20 years — it should not continue much more. Concluding this issue will have big benefits.”

For his part, Oktay Asadov also spoke in favour of “mutual respect, humanity, tolerance… for a future where the Black Sea region has prosperity.”

Turkish Prime Minister Binali Yıldırım echoed President Erdoğan’s sentiments at the ceremony by calling for stronger co-operation among BSEC partners. Emphasising economic and commercial relations he explained that “The population of the Black Sea basin is 350 million. The region is getting stronger, its economy is growing.”

He also mentioned how the region’s tourism sector had been assisted by developed infrastructure as well as by visa-free travel arrangements between partners. Tourism remains a critical part of the Turkish economy, and Black Sea countries accounted for around 10.5 million tourist visitors to Turkey last year.

Yıldırım added that although member states had political disputes on occasion, he dismissed these as “temporary problems” and called for close co-operation to continue. These remarks come as Russia and Turkey reached a deal last week to remove the last of the sanctions they had placed on one another following Turkey’s downing of a Russian military aircraft in November 2015. Other foreign leaders also praised the meeting.

Mr Yıldırım’s Russian counterpart Dmitri Medvedev added that the BSEC summit had served to foster an “environment of trust” while Greek President Prokopis Pavlopoulos proposed that closer Greek-Turkish ties would “ease tension and help find solutions to problems that exist” between the two countries.

Member states issued a joint declaration reaffirming their commitment to BSEC’s founding principles and objectives, which includes their “desire to turn the Black Sea region into a zone of peace, stability and prosperity.”

The declaration, which can be read in full here, also stated: “We note that the 25th  Anniversary Summit of BSEC serves as a milestone of our firm common desire to reinvigorate the quarter-century of cooperation among the BSEC Member States and provides the opportunity to exchange views at the highest level on further developing our cooperation to the benefit and prosperity of our peoples over the next decades.”