President Tatar tells EU to ‘contribute to a solution, not to the conflict’ in Cyprus 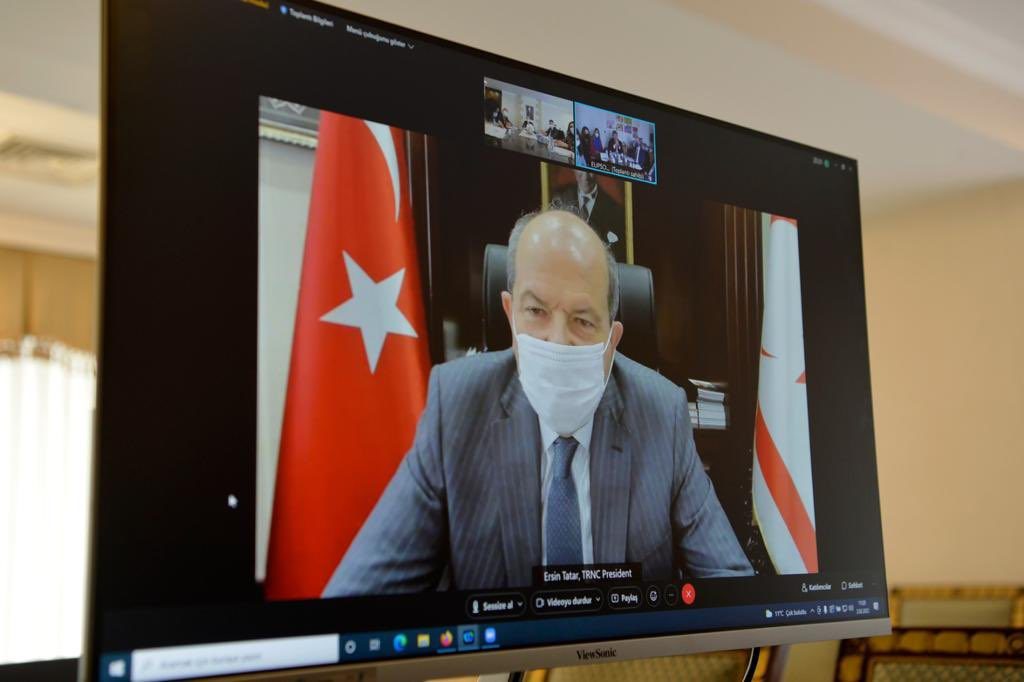 “We are ready to continue and expand our cooperation with the EU”, President Ersin Tatar told Mario Nava, the European Union Director-General for Structural Reform Support, in an online meeting on Thursday, 3 February.

The Turkish Cypriot leader was discussing improving cooperation with the European Union (EU) through different projects that are designed to aid the economic development of the Turkish Republic of North Cyprus (TRNC).

According to a statement from the TRNC Presidency, President Tatar expressed his readiness to cooperate with the EU, while urging the European bloc to stop its discrimination against Turkish Cypriots on the divided island:

“It is important for the EU to avoid any discrimination against the Turkish Cypriots,” adding, “I reaffirm our position that we are ready to continue and expand cooperation with the EU in different areas ranging from environment to education, from trade to tourism”.

President Tatar underlined the problems faced by Turkish Cypriots, caused by the ongoing international isolation of North Cyprus, which he claims are continuing ‘to act as an obstacle for enhancing better relations and cooperation between the two peoples of the island, as well as the bloc’. The TRNC President called on the EU to take action to address this.

During the online meeting with Nava and his team, the TRNC President highlighted the imbalance between the two Cypriot sides, stating that this could be eliminated with economic and social investment, including the development of the TRNC’s infrastructure, which in turn could ‘encourage a balanced reconciliation’.

President Tatar also noted that the Turkish Cypriot people expect the EU to keep its promises by abandoning policies that ‘feed inequality’, and called for a ‘contribution to the solution, not to the conflict’.

The Cyprus dispute is decades old. The island became politically spilt just three years after gaining independence from Britain, when Greek Cypriots seized control of the power-sharing Republic of Cyprus in a brutal 10-day coup in December 1963.

Turkish Cypriots were forced out of government and made to live under oppressive conditions for ten years, with many encouraged to leave the island permanently.

The island became ethnically split into a Turkish North and a Greek South after a second coup, this time by Greece, on 15 July 1974, prompting Turkey to intervene five days later. The ten-year conflict cost the lives of thousands of people on both sides, with a third of Greek Cypriots and half of all Turkish Cypriots displaced.

Despite there being two governments in Cyprus since 1964, only the Greek Cypriot one is internationally recognised.

UN talks to reconcile the two sides have been ongoing since the 1960s. In 2004, the internationally-backed Annan Plan to create a united federal Cyprus was put to a referendum. Two thirds of Turkish Cypriots voted for the plan, but 76% of Greek Cypriots voted against it. The EU pledged to end the international isolation of North Cyprus as a result.

EU broke own rules to admit divided Cyprus in 2004

A week after the referendum, on 1 May 2004, the EU broke its own rules by admitting by a divided country as a member. It had not envisaged the Greek Cypriot side voting against the plan and had made no provisions for this.

In principle, the entirety of the island is part of the EU, but in practice only the Greek Cypriot southern part, still known as the Republic of Cyprus, enjoys the full benefits of membership.

The northern part of the island, the internationally unrecognised TRNC, remains frozen out, primarily at the insistence of Greek Cypriots who have used their veto to prevent the EU implementing its direct trade regulation, and to also limit contact and aid to Turkish Cypriots.

One significant negative impact has been to limit the economic growth of North Cyprus. Some goods produced in the TRNC, such as dairy and fish, are either banned completely from being exported to the EU, while others must go via South Cyprus first, adding time and extra costs to goods, as well as making them less competitive.

Other areas of discrimination include the deliberate exclusion by Greek Cypriots of Turkish as an official EU language in 2004, despite it being part of the Republic of Cyprus constitution, putting Turkish Cypriots at a distinct disadvantage for EU work.

Elected political representatives from North Cyprus are also unable to take up seats in the European Parliament, preventing them from raising the problems they face directly with their European peers.

It has created an aid programme for the Turkish Cypriot community based on the Aid Regulation (Regulation (EC) No 389/2006). The programme is managed by the European Commission’s Directorate-General for Structural Reform Support .

Between 2006-2018, the EU allocated nearly €520 million to projects to facilitate improvements in North Cyprus. One recent project is to offer scholarships to Turkish Cypriot students and professionals to cover the costs of studying in Europe.