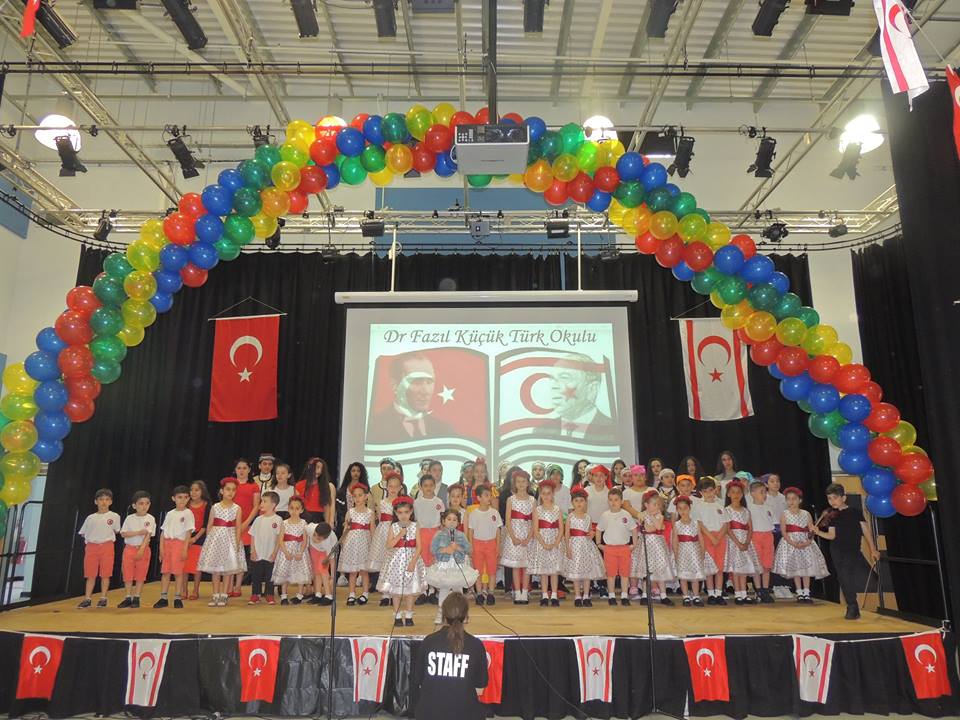 If you live in southeast London and are looking for a place where your child can learn Turkish, and explore their cultural heritage through art, dance and theatre, look no further than Dr. Fazıl Küçük Turkish School.

Established in 1984 and named after the founding father of Turkish Cypriot nationhood, Dr. Fazıl Küçük is one of the oldest and biggest Turkish supplementary schools in Britain. Last year, 258 students were enrolled at the school, from toddlers through to older teenagers.

Earlier this year, T-VINE Magazine had the chance to get to know those involved with Dr. Fazıl Küçük Turkish School a little more when we shared neighbouring stands at the Turkish Cypriot Cultural Festival in Chingford. We spoke at length to Özge Sipahi, the chair of the school’s Board of Trustees, who gave us an overview of what the school has to offer.

“Dr. Fazıl Küçük Turkish School runs all day every Saturday from 10am to 6pm during regular UK term-time. The morning is focussed on Turkish language classes, and the afternoon is dedicated to activities such as sport and folk dancing.”

“We have over ten different classes, including a crèche for infants. School fees for the year are a modest £130 for one child, reduced to £110 per child for two or more students from the same family.”

The voluntary-managed school employs 15 professional teachers. The fees of six teachers are subsidised by the governments in Turkey and North Cyprus, the rest the school must fund. Their aim is to give instruction to children on how to read and write in Turkish, so they become proficient enough to sit GCSE and A-Level exams in the language.

“All staff are DBS-checked before being allowed to work at the school,” confirms Özge and adds:

“Each of our classes is geared to the needs of the children according to their age and ability. The crèche caters for those aged between 18 months and 4 years old, followed by the primary class for those aged four and five. There are also beginner classes for children who join the school later but speak little or no Turkish.”

The school’s subsequent classes are numbered 1 to 5, according to age and ability, based on guidance from the UK’s Ministry of Education. Children proceed through these five grades, before they join GCSE-Level class, which is usually for children aged 14 and above.

For older students (16-18), preparation for A-Levels is in two stages. The first year focuses on passing an AS-Level in Turkish, with the second year on securing A-Levels.

One area Dr. Fazıl Küçük Turkish School is particularly renowned for is in traditional Turkish Cypriot and Anatolian folk-dancing. Different-aged teams regularly perform in the UK and abroad, at both cultural and competitive events, with the school winning numerous prizes.

The academic year is also full of special days, allowing students to show-off their new skills to their relatives and wider community, as school chair Özge explains:

“We mark key dates in the Turkish and Turkish Cypriot calendar, such as Turkey and the TRNC’s Republic Days, the annual commemoration for Atatürk and Dr. Fazıl Küçük, and 23 Nisan [Children’s Day] and 19 Mayıs [Youth and Sports Day]. There are recitals, as well as theatre and dance displays.”

“During the year, we organise fundraising events such as cultural evenings and student ball. And, if they fall within our term times, we also hold special Bayram events [Islamic festivals].”

“Each end-of-year we also run a popular school summer fete. There’s a big barbecue, sports events, music, folk-dancing, and stalls. It’s a free day out for all the family and because it’s open to the local community, many non-Turkish people also come and enjoy our culture.”

Having spent a day next to the school’s stand at the mega Turkish Cypriot Cultural Festival attended by over 20,000 people in June, you realise it’s not just the children, but also the parents who enjoy the social bonding that the school offers. Along with the proud glint in their eyes as their children shine on stage with their pretty costumes and amazing dances, was the hilarious banter and support for one another.

“There’s a really warm atmosphere at the school that naturally extends to the parents,” says Özge. “There are friendships made that last way after school ends.”