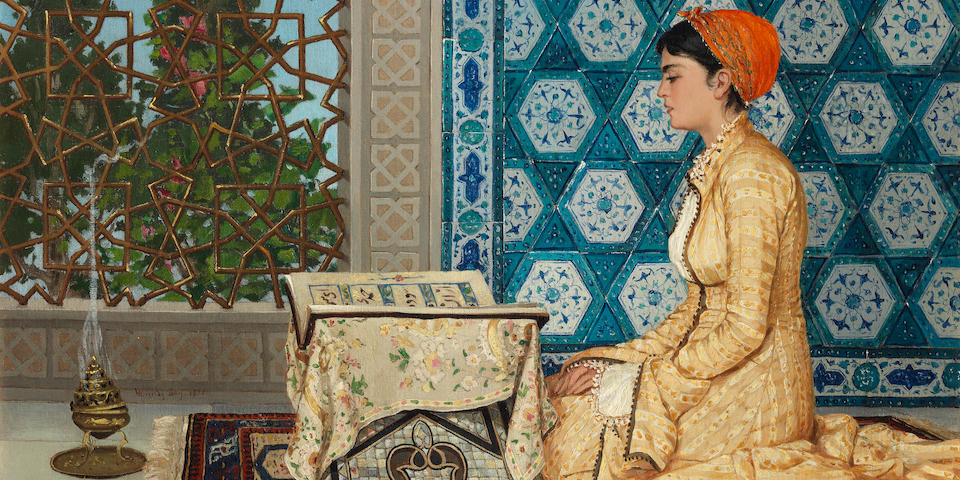 A rare work by Turkish painter Osman Hamdi Bey has sold for £6,315,000, setting a new world record price for the artist at auction.

The picture of a young woman reading the Qur’an fetched the record-breaking fee at an auction of 19thcentury European, Victorian and British Impressionist art at the Bonhams auction house on New Bond Street, London, on Thursday 26 September.

It had been expected to sell for just £600,000 to £800,000 and fetched more than double the total amount paid for three works by leading Austrian orientalist painter Ludwig Deutsch.

The auction price paid beat a previous record for an Osman Hamdi piece, $6.5 million (£3.735 million) for a painting called Istanbul Hanımefendisi [The Lady of Constantinople] at a Sotheby’s auction in London in 2008. Another famous work of art by Osman Hamdi – The Tortoise Trainer – sold for $3.5 million in 2004.

“Young Woman Reading was one of the finest of Osman Hamdi Bey’s paintings to appear at auction in recent years,” Bonhams head of 19th century art Charles O’Brien said.

“I am not surprised that the bidding was so strong and that it set a new world record sum for the artist.

“The sum achieved for Young Woman Reading, and for the three works in the sale by Ludwig Deutsch, demonstrate the strength of the market for Orientalist paintings.”

Young Woman Reading, painted in 1880, was sold by an anonymous private collector who had acquired the work of art at an auction at Sotheby’s in London 43 years ago.

“Young Woman Reading, known more commonly as Young Girl Reading the Qur’an, displays many of the qualities for which Osman Hamdi became best known,” a Bonhams catalogue entry for the painting said.

“The impeccably rendered dress of the kneeling figure and the decorative background against which she is set, rich in colour and Islamic designs, are virtual signatures of the artist, as is the startling clarity of the picture’s highly detailed style.

“The precision of its surface, however, masks significant ambiguities at its core: the book that the woman has chosen, the direction of her gaze, and even the parting of her lips and the buttons at her neck, all serve to undermine our first impressions of the scene.

“What begins as a pretty harem picture, in other words, becomes a complicated and multi-referential text which addresses a variety of topical issues within the landscapes of Orientalism, 19thcentury art history, and aspects of the artist’s biography itself.

“Through its transposition of British, French, and Turkish models, and its manipulation of their themes, Young Woman Reading demonstrates the unique nature of Osman Hamdi’s Orientalism, and his artful game.”

Born in Istanbul, then known as Constantinople, in 1842, Osman Hamdi Bey was a “remarkable figure who combined his life as an artist with a career as a public administrator in the Ottoman bureaucracy, an archaeologist and . . . a pioneer of the profession of museum curator in Turkey,” Bonhams said in a press release to announce the sale of his painting.

“Trained initially as a lawyer, Osman Hamdi Bey embraced painting while completing his law studies in Paris in 1860.

“He studied painting under the great French orientalists Jean-Léon Gérôme and Gustave Boulanger.

“He exhibited at the 1867 Paris Exposition Universelle and continued to paint throughout his life despite his many public duties.

“Osman Hamdi Bey’s paintings reflect his years of study with Gérôme and Boulanger, but as the leading travel writer and authority on the Muslim world Barnaby Rogerson wrote in the autumn edition of Bonhams Magazine: ‘In his works, he was not throwing together random picturesque objects, but composing a loving tribute to his homeland, which for centuries had created dazzling ceramics, textiles, buildings, carpets, gardens and texts that his paintings assembled.’”

The auction of Young Woman Reading came less than five months after a 500-year-old portrait of Ottoman ruler Süleyman the Magnificent sold for more than £5.3 million, also at a London auction.