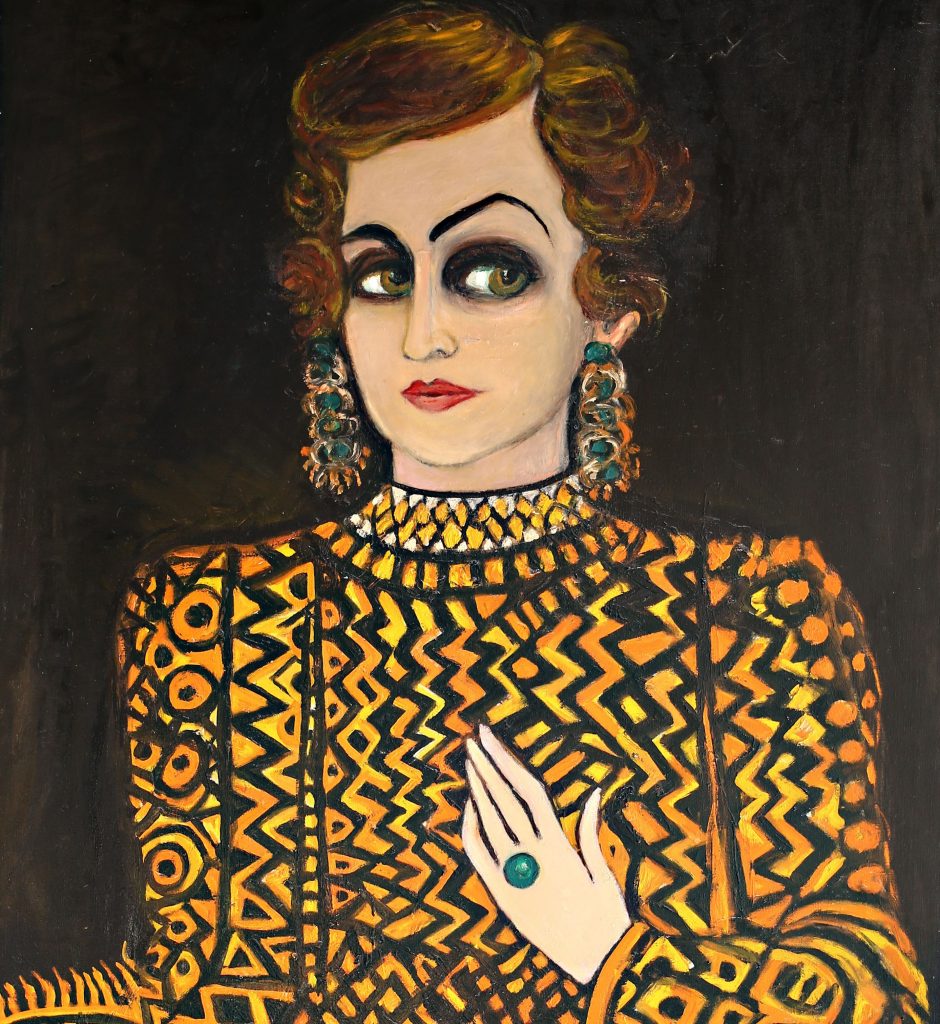 First a daughter and a sister, then a wife, a mother, a princess and a painter externalising her talent… This major Tate Modern exhibition takes you into the world of a 20th century artist lost to history, whose life was as colourful as her art.

Describing a self-portrait from 1980 Fahrelnissa Zeid observed: “I am the descendant of four civilisations. In my self-portrait, the hand is Persian, the dress is Byzantine, the face is Cretan, and the eyes Oriental, but I was not aware of this as I was painting it.”

Her life certainly included so much travelling and colour that she was among those to acknowledge existence not belonging to a single civilisation or movement, but as a multitude of alternatives (possibilities?) culminating in one’s body.

Born in 1901, Fahrelnissa was among the first women to receive formal training as an artist in Istanbul and one of the first representatives of Turkish modern art.

She was the daughter of Ottoman aristocrat Şakir Pasha and the sister of a famous Turkish writer Cevat Şakir (also known as the ‘Fisherman of Halicarnassus’) and the wife of Iraqi Prince Zeid Al-Hussein. But not everything was all glittery and powder-pink, attending high-society events, travelling and mingling with the elite.

In fact, Fahrelnissa Zeid’s life included a family murder, the death of her first child, escaping from a political assassination, and being considered a ‘freak’ – as she expresses in her own words – for painting abstract art. As a Muslim and as a Muslim female member of royalty, she was undervalued in the cruel pages of history. But in the first major exhibition of her work in the UK the Tate Modern explores the world of this fascinating yet hitherto unknown woman whose life sits outside of the usual European boundaries.

As I entered the exhibition of one of Turkey’s most remarkable women, the feeling was that of having entered a vibrant world infused by the distinct atmospheres of contrasting cities around the world that she lived: New York, London, Paris, Berlin, Istanbul, Baghdad and Amman. There it was, the most candid sight into the world of an Ottoman aristocrat and Iraqi royalty, but more than that: an artist.

The show flows chronologically through four key sections: Fight Against Abstraction 1947, Resolved Problems 1948, My Hell 1951 and Someone from the Past, comprising Zeid’s sketches, portraits and paintings on the chicken bones that she cooked for herself for the very first time at the age of 57.

Fahrelnissa, or Fahrunissa as I should say in Turkish, clearly devoted herself to art from an early age. The exhibition begins with introductory sketches drawn by Zeid on her friends’ notebooks when she was studying in a French convent school in Istanbul, followed by her grandmother’s watercolour portrait.

After years of living in Istanbul, her first marriage with İzzet Melih Devrim allowed her to travel across Europe and experience art at its best in various galleries and museums, where she could immerse herself in abstract art. And like many other artists, she was mesmerised by Paris and the inspiration it gave her.

As the product of Istanbul, a city that embodied, and still embodies, the contrasting ties between East and West, oriental and modern, during interwar period, her initial abstract paintings also carry contrasting features: vibrant colours delineated by thick, dark lines. She, at some point, had to ‘fight’ for her own abstraction as a form of expression while bringing together different traces of different cultures.

Eliminating figurative art and fully embracing the notion of abstraction, these early paintings present a sense of uniqueness: Abstract Parrot brings to my mind stained-glass windows of an old Western church while reflecting, at the same time, a parrot from an exotic land, as if overthrowing a western-only stereotype. This technique of Zeid’s, placing ideas on her mind into her paintings in fine detail, is also prominent in one of her most famous paintings, Fight Against Abstraction, and can be likened to carpet weaving or Byzantine mosaics.

Upon her visit to Scotland at the recommendation of Queen Elizabeth, the Queen mother, she painted Loch Lomond, in which she portrays her growing interest in abstract references transforming bodies, tents and hills into an image dominated by geometric figures. Although, this was the first time I had the chance to encounter Zeid’s works, it is not difficult to suggest that she established her own abstract style, like Picasso. She found herself in that concept and her paintings became reflections of her thoughts, beliefs, and emotions; how she saw the world through her own eyes.

After experiencing some historic moments in her life such as sharing a table with Adolf Hitler, and narrowly escaping the assassination of the entire Iraqi royal family, Zeid convinced her husband they should go to the island of Ischia, off the coast of Naples, to shake off the distress they had been exposed to. There, it was revealed, she was very much inspired by nature and loved the sea as well as swimming. Her painting Puncta Imperator, translated as ‘Sea Cave’, perfectly portrays the influence of the south of Italy in which many civilisations lived, and conveys a lyrical abstraction of nature and the sea.

Yet, surely the most interesting and extra-ordinary part of the exhibition is ‘paleo krysralos’ (glazed chicken legs), which showcases painted chicken and turkey bones. It was a product of her depressed times, when they moved into a smaller house following the assassination of the Iraqi royal family and she was forced to start cooking for herself for the very first time. She took advantage of the natural smoothness of those bones, which are displayed in the final room of the exhibition: Someone from the Past. One of them is shown in motion, floating in the air, while others are stuck onto a resin panel (see video).

Towards the end of her life, she primarily focused on portraits of herself and the people who were close to her, including her students. She would paint them right there and then, when she had the inspiration.

This retrospective exhibition at Tate Modern throws light on a forgotten Turkish female artist and a princess who admirably synthesised a wide range of influences, from Oriental to Byzantine and Persian.  Today, her paintings are seen as representing a very colourful harmony combining the east and the west. At the end, this show left me with two questions: why was this talented princess forgotten? And, is there any artist on earth who has not been inspired by Paris?

Editor: the Fahrelnissa Zeid exhibition runs until 8 October. Find details on the Tate Modern website, including a fascinating video of Zeid, which confirms our reviewer’s assessment of this truly amazing and hitherto-hidden Turkish genius. For those who like a guided tour, a date for your diaries: on 25th September, there will be a special tour of the exhibition led by its curator.