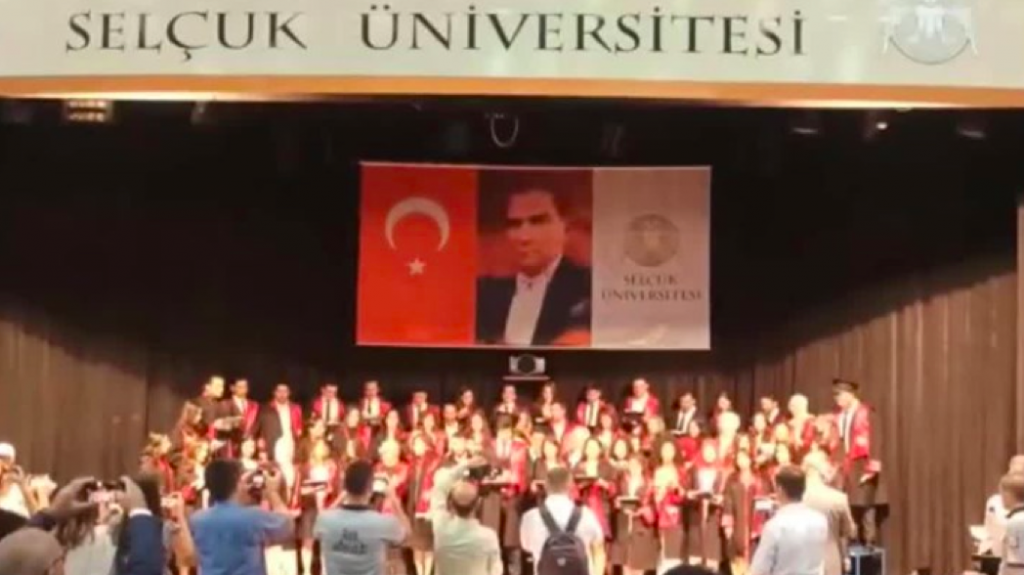 Medical students graduating from Konya’s Selçuk University suddenly found themselves in the dark and the stage curtains drawn when they tried to take the Hippocratic Oath during their graduation ceremony.

The universal ethical code, which is attributed to ancient Greek physician Hippocrates, is a passage of rite for medical students around the world. However, the university’s Faculty of Medicine had advised students ahead of their graduation ceremony to use an edited version of the Hippocratic Oath.

The Selçuk University Medical Oath simply states: “I will not allow differences of religion, nationality, race and opinion to come between my profession and my patient.”

Students objected to the university censoring the Hippocratic Oath, which is taken from the World Medical Association’s Declaration of Geneva.

In Turkiye this declaration reads: “I will not allow age, illness or disability, belief, ethnicity, gender, nationality, political opinion, race, sexual orientation, social position or any other characteristic to get between my duty and my patient.”

When Selçuk University medical graduates started to read the full oath instead of the edited one, the lights in the room were turned off. When this did not deter the students, who continued to recite the full oath, university staff then drew the stage curtains.

Unfazed, the students walked beyond the curtains to the front of the stage where relatives applauded the students’ actions and used their mobile phones to illuminate the room.

A statement about the incident by the Turkish Medical Association (Türk Tabipleri Birliği) said: “We are proud of our young colleagues, who insisted on upholding the Oath of Medicine and universal medicine values ​​despite coming under pressure “Not to read that text” and the lights and curtains being closed.”

“Welcome aboard, we celebrate your graduation,” the statement on social media added.

Selçuk University isn’t the only university to try to change the Declaration of Geneva. Last year, İnönü University Rector Ahmet Kızılay described the oath as “perverse,” and announced Faculty of Medicine would revise the text to “protect social and family values.”

Sakarya University’s Faculty of Medicine also removed the phrase to “not to discriminate on the basis of sex, ethnicity or sexual orientation” from the oath its students should use.