One of Turkey’s most popular historians will be in London for the annual Atatürk, Youth and Sports Day. Prof. İlber Ortaylı, who lectures at Istanbul’s MEF and Ankara’s Bilkent universities, is a special guest and speaker at an iftar dinner organised by the Çanakkale Anma Platformu (Çanakkale Commermation Platform) at Hilton Hotel Kensington on Sunday, 19 May.

This year, the day also marks the one hundredth anniversary of May 19, 1919 – the official date of the start of the Turkish War of Independence. It was on this date that Turkish military commander Mustafa Kemal landed at Samsun on the Black Sea and declared war on the invading forces carving up Anatolia as ‘spoils of war’ following the Ottoman Empire’s defeat in the First World War.

Under Kemal, later named Atatürk (father of the nation) Turks emerged victorious from this four-year war, ridding modern-day Turkey of foreign powers to instead form a new, secular republic.

In a talk in Turkish titled ‘Yüzüncü Yılında Milli Mücadelenin İlk Adımı, 19 Mayıs 1919’ (On the centenary of 19 May 1919, the first steps of the ‘National Struggle’), Prof. İlber Ortaylı will explain the importance of 19 May not only for the war effort, but also its legacy for Turkish society.

Atatürk dedicated 19 May to Turkey’s young people, believing it is they who are responsible for defending the state and its values. The day was formally adopted as an official public holiday for Youth and Sports in 1938 and continues to be celebrated every year. 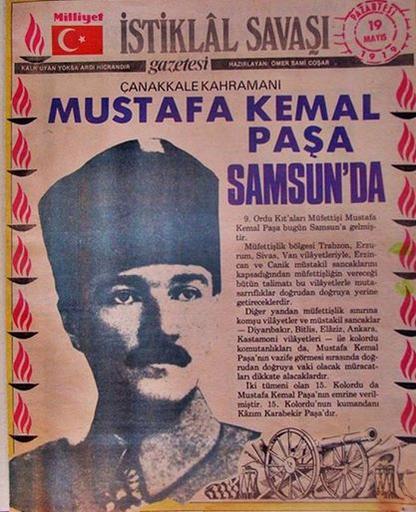 Prof. Ortaylı’s talk forms part of a special evening programme that starts at 18.30 and includes light music and an iftar (breaking of fast) communal meal.