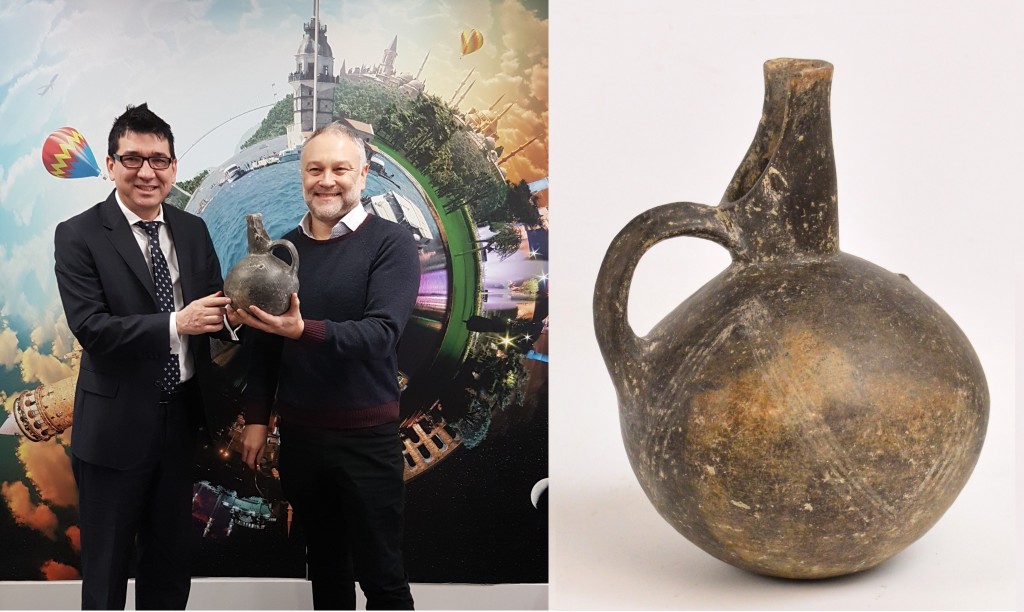 A woman who bought a souvenir jug in Turkey more than 50 years ago has returned it after discovering it is a 4,500 year-old Bronze Age urn.

Thelma Bishop bought the ceramic jug with her husband Malcolm while on holiday in Ephesus, Turkey, in the 1960s. The couple, from Gatley in Stockport, ran a gallery in Fallowfield, Manchester, selling studio ceramics and modern design, until Malcolm’s death in 2005. Mrs Bishop kept her Turkish souvenir and thought nothing more of it until she decided to get it valued last year.

A regular client of Adam Partridge Auctioneers and Valuers in Macclesfield, she asked them to assess the authenticity of the item. Jason Wood, an archaeologist and specialist consultant in studio ceramics at Partridge’s, confirmed the urn to be a genuine Early Bronze Age artefact belonging to the Yortan culture (c.2500 BC). While rare today, the urns were commonly found as a burial offering in graves in western Anatolia from this period.

The jug’s authenticity was verified by other experts too, prompting Mr Wood to pass on the news that although Mrs Bishop had bought the jug in good faith 50 years ago, the fact it was an ancient artefact meant it should never have left Turkey. As such, it would be wrong to sell the jug at auction. Instead, he advised her to return it, which she duly agreed.

Last week, Mr Wood brought the jug to London on behalf of Mrs Bishop, where it was handed over to the Turkish authorities.

Speaking about the unusual find, Jason Wood said: “It’s not everyday that a prehistoric pot from Anatolia is unearthed near Stockport. Given its age, fragility and how far it’s travelled, I’m also astonished at its remarkable condition – better than some 20th century ceramics I’ve catalogued.”

Standing at 26.5cm high, the ancient jug is beak-spouted, black-slipped, burnished with an almost-perfectly rounded base and a looping handle with small raised lugs to the body. It will now be housed in the Museum of Anatolian Civilizations in the Turkish capital Ankara.

‘Setting an example to the auction community’

Accepting the jug on behalf of the Republic of Turkey, Selcuk Can, the UK head of Tourism and Culture, said:

“Turkey has been fighting against illicit trafficking of cultural artefacts for many years and working for their repatriation. The Turkish Directorate General for Cultural Heritage and Museums expressed the Ministry’s thanks to Mrs Bishop and Adam Partridge Auctioneers for contributing to the protection of Turkey’s cultural heritage. Their sensitive actions set an example to the auction community, while stressing the importance of transparency in the art market. The Ministry will be pleased to welcome Mrs Bishop and Adam Partridge Auctioneers to Turkey and will be presenting them with museum passes to use in all the museums.”

Adam Partridge also commented: “I’m so pleased this rare Turkish artefact is returning to its country of origin. Not all auction houses faced with this situation would act in the same way. I hope we have set an important precedent for similar cases in the UK.”

Main photo: Selcuk Can (left), the UK head of Turkish Tourism and Culture, receiving the jug from Jason Wood on 17 January 2017