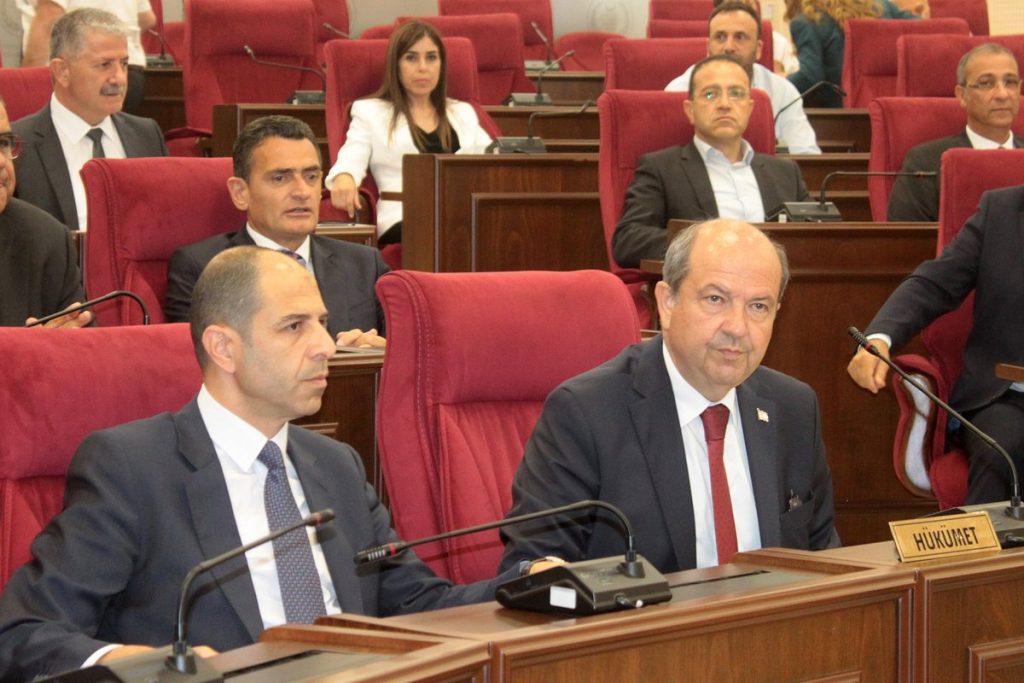 The new coalition in the Turkish Republic of Northern Cyprus (TRNC) is to face its first major test when its programme for government will be put to a vote in Parliament.

A vote of confidence in the programme set out by the National Unity Party (UBP)-People’s Party (HP) government, formed last week following the collapse of a previous four-party coalition, is expected to take place this weekend.

The government is the 35thsince the TRNC was established in 1983 and the 41stsince 1975, when the Turkish Federated State of Cyprus was formed.

The vote will follow debates which started yesterday, 30 May, during an extraordinary session of Parliament.

The vote of confidence could then take place on Saturday or Sunday, depending on when the debates end.

A defeat for the government would require Ersin Tatar, the UBP leader, to resign as Prime Minister, according to the country’s Constitution.

While the coalition, which holds 30 of the 50 seats in Parliament, expects to win, UBP MP and former party leader Hüseyin Özgürgün – replaced by Ersin Tatar last autumn – has said he will not take part in the vote.

Mr Özgürgün found himself isolated following last year’s general election when HP leader and anti-corruption campaigner Kudret Özersay – now the Deputy Prime Minister and Minister for Foreign Affairs – refused to enter into government with him, forcing the UBP into opposition, despite being the biggest party in Parliament.

In a series of scathing tweets this week, Mr Özgürgün announced that he would stay away from the show of hands because “my conscience has given a vote of no confidence to Kudret Özersay”.

The online attack came after Mr Tatar kicked off parliamentary procedures by reading out his 36-page programme on Monday setting out the government’s goals and “new ideas” for a solution to the decades-old Cyprus problem.

Top of the agenda was the economy, which has been hit by high inflation following large falls in the value of the Turkish lira last summer, and the need to sign a new Economic and Financial Cooperation Protocol with Turkey, the only country that recognises the TRNC.

While admitting that the economic picture was “grim”, Mr Tatar said that he was “sure we will succeed if we work hard with determination and do what’s needed without delay”.

“There is a possibility to sign the Economic and Financial Cooperation Protocol with Turkey to cover the 2020-2022 period,” he said.

“However, we need to find a solution for the funds needed for infrastructure investments and our budget.”

On the Cyprus issue, Mr Tatar said that “endless negotiations” to establish a federal partnership with the Greek Cypriot side had been “exhausted” and that a federation – supported by TRNC President Mustafa Akıncı – could not be possible while the “mentality” of the Greek Cypriot leadership remained unchanged.

“For this reason, it is necessary to bring new and much more realistic ideas to the table that can be realised within the current conditions of Cyprus, including, on the one hand, partnership models based on cooperation and, on the other hand, two states within the EU,” he said.

The reading out of the document followed a bumpy start for PM Tatar, who was forced to issue a clarification last week after he was accused by President Akıncı of “overstepping the mark” when he appeared to criticise the President over his continuing support for a federal solution to the Cyprus problem.

The creation of a bi-zonal, bi-communal federation in Cyprus has been the focus of on-off United Nations-backed talks for decades although there have been no new negotiations between Turkish Cypriots and Greek Cypriots since the dramatic failure of a top-level summit in Switzerland in July 2017.

Speaking to reporters in the courtyard of the presidential palace in Lefkoşa just minutes after presenting a list of his Cabinet members to Mr Akıncı for approval, Mr Tatar said: “The President says he advocates a federal solution [to the Cyprus problem], so we think that we need to put him straight a bit.”

The “ayar” [‘put him straight a bit’] comment brought a swift response from President Akıncı, who said that Mr Tatar’s priority should be to “straighten out the economy”.

“The Cyprus Problem is an issue dealt with by the President’s office,” Mr Akıncı said. “The Ministry of Foreign Affairs and its positions existed in the previous government.  Nothing has changed.

“Of course we shall continue to consult with the Foreign Minister [Kudret Özersay], but the mandate [to negotiate a Cyprus settlement on behalf of the Turkish Cypriots] solely belongs to me as I was elected to this position for the views I represent.

“Let’s discuss alternative models but what are these models? Where are they? Everyone is saying a solution is only through negotiations.

“You can’t just invent a solution model. It has to be something which the other side accepts. You need to produce a model within the UN framework.”

The rebuke brought a clarification from Mr Tatar, who insisted that he had never meant to “insult” President Akıncı and that his words had been misconstrued by some sections of the media.

He said that he had simply been expressing his view that an “adjustment” and “re-evaluation” of President Akıncı’s position, as the Turkish Cypriots’ representative in talks with the Greek Cypriot side, was necessary in light of the change of government.

Meanwhile letters of congratulations have been sent to Mr Tatar from Turkish President Recep Tayyip Erdoğan and Vice-President Fuat Oktay.

Oktay: “We will continue to protect the rights and interests of Turkey and the Turkish Cypriots” https://t.co/rvdhAGSOLs pic.twitter.com/GjqC37irDU

“Mr Prime Minister, I congratulate you personally and on behalf of the Turkish nation on the occasion of the formation of a new government in the Turkish Republic of Northern Cyprus under your prime ministry,” Mr Erdoğan wrote.

In his letter Fuat Oktay said: “In addition to our efforts towards finding a just and permanent solution to the Cyprus problem which will safeguard the rights and interests of the Turkish Cypriots, I hope the current cooperation between our two countries for the further development of the TRNC in all fields will continue to grow during your government’s term in office.

“Turkey will continue to provide all kinds of support to raise the prosperity of the Turkish Cypriot people and the TRNC for a brighter future.”