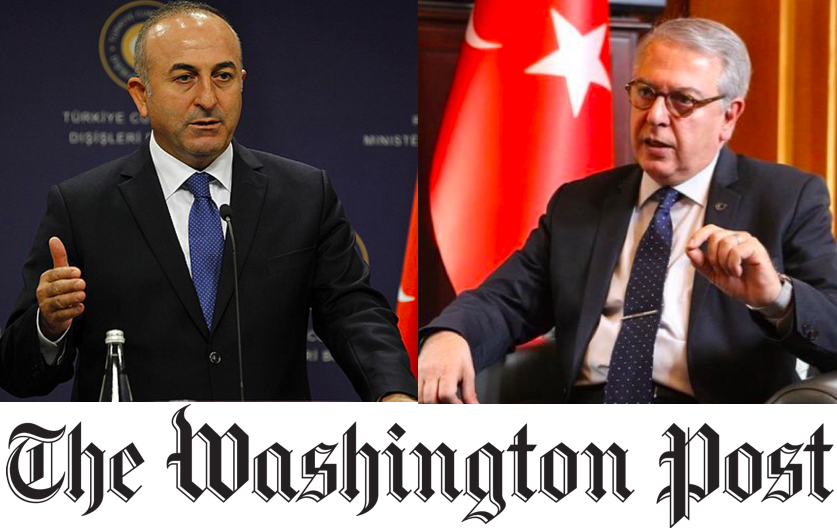 Turkey has slammed the Washington Post newspaper after it published an article by a PKK terrorist leader with a $4 million reward on his head.

Turkish Foreign Affairs Minister Mevlüt Çavuşoğlu lashed out at the publication after it ran an opinion piece in the name of Cemil Bayik entitled “Now is the moment for peace between Kurds and the Turkish state. Let’s not waste it”.

The article, dated 3 July, was published despite Bayik, 64, being on a US State Department list of the world’s most wanted terrorists.

Mr Çavuşoğlu accused the paper of spreading “terrorist propaganda” and said that the article could not fall under the right to freedom of the press and freedom of expression.

“Would the Washington Post publish the head of Daesh [Abu Bakr] al Baghdadi’s article or … an article by any other member of Al Qaeda or Al Shabab or Boko Haram?,” Mr Çavuşoğlu said during an interview with Turkish broadcaster TRT.

“Unfortunately, it is an indication of the weakness that the world has fallen into when it comes to counter-terrorism.”

Mr Çavuşoğlu added that Turkey’s ambassador at the United Nations in New York, Feridun Sinirlioğlu, had lodged a written protest with UN Secretary-General Antonio Guterres, who was said to be “shocked” to learn that Bayik was on a “Red Notice” list of internationally wanted fugitives.

A statement from the Turkish Foreign Ministry said: “One of the ringleaders of the PKK, which has brutally killed tens of thousands of innocent people and is officially designated as a terrorist organization in many countries, including the USA, overtly engaged in terrorist propaganda by making use of the Washington Post.

“Through the said publication, one of the core commitments undertaken by the international community, namely the principle of the prevention of incitement to terror, has heavily been violated. It is essential that no distinction should be made among the terrorist organisations.”

Condemnation also came from Turkey’s ambassador to Washington D.C., Serdar Kılıç, who took to Twitter to vent his and his nation’s anger.

“By opening its pages to one of PKK’s bloodthirsty leaders who is wanted by U.S. authorities as well, the @washingtonpost took the profession of journalism to new lows”

2- By ignoring these facts and opening its pages to one of PKK’s bloodthirsty leaders who is wanted by U.S. authorities as well, the @washingtonpost took the profession of journalism to new lows.

“The PKK is a terrorist organization that is responsible for the loss of almost 40 thousand innocent lives and is designated as such by the U.S. along with several States and international institutions including the EU and NATO,” he wrote.

“By ignoring these facts and opening its pages to one of PKK’s bloodthirsty leaders who is wanted by U.S. authorities as well, the @washingtonpost took the profession of journalism to new lows.

“This is an affront not only to the Turkish people, but also to the memories of tens of thousands of innocent men, women and children who became victims of terror at the hands of the PKK.”

Mr Kılıç suggested that the Washington Post could have broken American laws by providing a platform for Bayik’s views.

“It should be noted that the U.S. Supreme Court ruled that providing support to even non-violent activity of a terrorist organization violates the anti-terror laws of the USA,” he added.

“Why not open your pages to other murderers as well WP? There are plenty of them around,” wrote Cüneyt Cebenoyan whose sister Yasemin was killed by a PKK bomb in Istanbul on 30 December, 1994

“To portray one of the leaders of a terrorist organization as the representative of the Kurds is, above all, an insult to the Kurds,” Mr Kalın said.

“Why not open your pages to other murderers as well WP? There are plenty of them around,” wrote Cüneyt Cebenoyan, a film critic whose sister Yasemin was one of two killed by a PKK bomb planted outside an Istanbul hotel on 30 December, 1994.

It’s not even surprising that the @WashingtonPost provides space to terrorists any more.

Cemil Bayik, the #PKK leader, has an op-ed in today’s paper calling for “peace” with #Turkey. It’s a skilled piece of propaganda. https://t.co/kXXrCytKc6 <thread below>

“It’s not even surprising that the @WashingtonPost provides space to terrorists anymore,” wrote Kyle Orton, an independent researcher focused on Syria and terrorism.

“Cemil Bayik, the #PKK leader, has an op-ed in today’s paper calling for ‘peace’ with #Turkey. It’s a skilled piece of propaganda.”

Twitter user Ceren Yazgan called the article a piece of “fiction” and an “insult to our intelligence, insult to victims of PKK terrorism, Kurds & Turks”.

The US State Department is currently offering a reward of up to $4 million for information that brings Bayik, also known as “Cuma”, to justice under its “Rewards for Justice” counter-terrorism programme.

A wanted notice on the scheme’s website describes him as an “Executive Committee Member, founding member and senior leader of the PKK” and notes that he is also “designated by the Department of the Treasury”.

“The PKK has targeted Turkish government officials, police and security forces and indiscriminately injured and killed civilians. PKK uses its network and criminal activities across Europe to obtain weapons and materials.

“The PKK also recruits and indoctrinates youths, sometimes by abduction, and employs them as militants. In 1993 the PKK kidnapped 19 Western tourists including an American and in 1995 two Americans were injured in a PKK bombing.

“In 2015 and 2016, the PKK expanded attacks across Turkey, metropolitan centers, and tourist destinations on Turkey’s Aegean and Mediterranean coast.

“In August 2016, the group claimed a car bomb attack against Sirnak police headquarters, killing 11 and wounding more than 70.

“In June 2017, the PKK attacked a military convoy in south-eastern Turkey, killing over 20 soldiers. Since 2015, the group has been responsible for the deaths of over 1,200 Turkish security officials and civilians.”

Two other PKK leaders – Murat Karayılan and Duran Kalkan – are also on the Rewards for Justice wanted list, with rewards of up to $5 million and $3 million respectively.