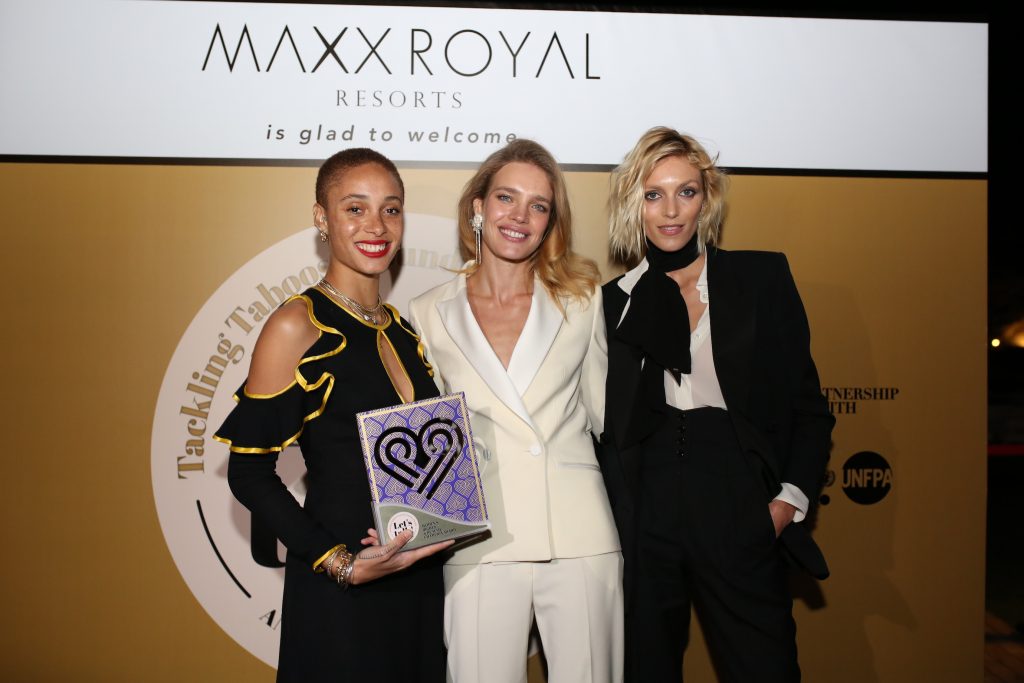 A day of discussions at an international forum in Antalya, southern Turkey, aimed at breaking down taboo subjects affecting women has ended with pledges to take better co-ordinated action to galvanise ‘political and social action’. The event culminated with an awards ceremony attended by the First Lady of Turkey, Emine Erdoğan, where she also vowed to continue her efforts to advance women’s rights in the country.

Let’s Talk! is a global initiative led by model and philanthropist Vodianova’s ELBI charitable foundation and UNFPA, the United Nations sexual and reproductive health agency. The inaugural and ambitious conference in Antalya brought together thought leaders, business representatives, academics, health care professionals, media, and policy makers for a series of panels on how to improve women’s health and gender equality.

The Davos-style event, held at the Maxx Royal resort in Kemer, saw a wide range of speakers share their personal and professional experiences of bringing about meaningful change that have challenged the stigma affecting women’s health and wellbeing. The taboo-busting panellists were drawn from the worlds of fashion, business,  sport, NGOs and government, between them delving into a range of critical issues including menstrual, reproductive and mental health.

In her opening address Vodianova said: “This is an issue which needs to be addressed, not just from a political point of view, but from a societal standpoint. No matter which culture you are looking at, there are issues surrounding the attitudes towards women’s health. In India, 45% drop out of school in sixth grade due to their periods, and the attitudes are also damaging in Europe.

“I want no young girl around the world to feel ashamed of something so natural and I believe that the beginning of discussion can be the crucial vehicle for destroying the taboos. Every word has the power to be an empowering tool.”

One of the most powerful talks of the day came from Anja Rubik. The supermodel turned activist formed SexEd PL to help breakdown conservative attitudes towards sex and generate access to better quality sex education. Her campaign came about in the wake of efforts by right-wing politicians to ban abortion in Poland. She explained that the topic of sex was so sensitive in the country, she was unable to attract any corporate or government support for her campaign.

Undeterred, Rubik ploughed in her own funds to curate a series of short videos featuring influential Poles talking about sex from different perspectives, including how a father finds the right words to talk to his teenage daughter about the subject. She also created a striking photography campaign, and most recently a book featuring real life stories from teenagers, with each component sending her #SexEdPL campaign viral. By harnessing social media, #SexEdPL not only bypassed the conservative and self-censoring Polish media, but also shattered multiple taboos in the process.

During the second panel, Ayça Turgay, head of communications at P&G Turkey, talked about her own experiences of menstruation as a young girl and the taboos around it. As an adult, one area of her work now is to oversee the Orchid brand’s nation-wide education campaign targeting pre-menstrual girls, so they feel comfortable talking about puberty, menstruation and babies. By targeting this age group, the campaign aims to stop young girls being fed myths and misinformation around periods and puberty.

Alongside the discussions, Vodianova also announced an exciting new partnership with Flo Health, a mobile app aimed at giving women real time data on their health, underpinned by the latest developments in science, technology and medicine. The work will see significant funds raised for UNFPA to help educate women and girls in India.

In the evening, Dr Nagham Nawzat Hasan, a Yezidi activist and gynaecologist from Iraq, Dilek Sabanci for Special Olympics Turkey, and British model and Gurl Talk founder Adwoa Aboah, were among the changemakers from across the world honoured at glittering award ceremony.

Speaking at the awards ceremony, special guest Emine Erdoğan said she was “heartened” by the discussions from Let’s Talk!. Touching on the multiple social conditions that adversely affect quality health care, she singled out poverty as the most damaging:

“Poverty is one of the biggest obstacles to ensuring quality health care for both sexes. However, women pay an especially heavy price with their lives through poverty. Child brides, female circumcision, and domestic violence are some of the issues arising that can destroy a person’s honour.”

She was also unequivocal in her condemnation about violence against women – at epidemic levels in Turkey – calling it “a crime against humanity”. Noting that “one in three women [around the world] suffer physical or sexual abuse”, Mrs Erdoğan added, “In our own country, we are fighting against this situation with great conviction. We say zero tolerance to violence against women”.

Turkish Airlines, Maxx Royal Resorts and the Association of Turkish Travel Agencies (TURSAB) were among the sponsors for this innovative and empowering event.

Alanna Armitage, UNFPA’s Regional Director for Eastern Europe and Central Asia said: “We are extremely proud to partner with Natalia Vodianova on this first global Let’s Talk! event. It has been a resounding success: we heard incredible stories of bravery and creativity that serve as inspiration for others. We have made connections that will spark new initiatives for change. And we are grateful for the many concrete pledges for follow-up action participants made. I’m delighted that Let’s Talk! has become such an important component of the growing global movement to dismantle taboos and stigma around women’s health and enable women and girls to shape their lives free from discrimination, fear and shame.”

See the next issue of T-VINE Magazine for a more detailed feature on the discussions and outcomes of Let’s Talk! and how it can benefit Turkish girls women.