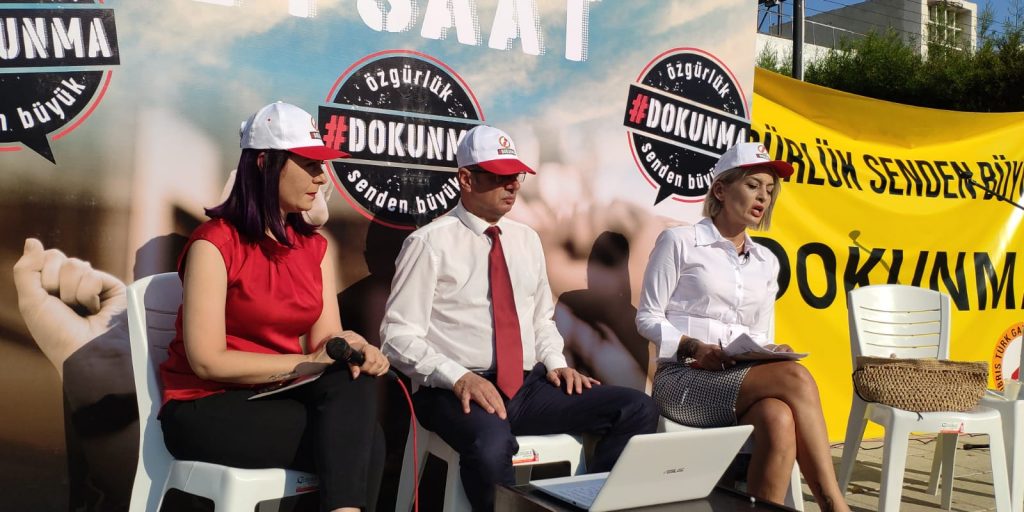 Over one hundred journalists in the Turkish Republic of North Cyprus have staged a peaceful demonstration against the government’s proposal to resurrect British colonial era laws that would limit freedom of speech against the head of state.

Organised by the Turkish Cypriot Journalists Association (TCJA), journalists of all ages, including veterans Hasan Hastürer and Süleyman Ergüçlü, that represent the entire breadth of political views in the country came together for a 24-hour vigil in front of the TRNC Parliament to protest the planned assault on freedom of speech.

Sitting in front of a huge banner with the hashtag #Dokunma (Don’t Touch), and the slogan “Özgürlük Senden Büyük” (Freedom – Bigger than You), the protesting journalists gave a running commentary about their campaign in a 24-hour live broadcast outside the Parliament.

Multiple speakers explained why they vehemently objected to the plans of the current coalition government, led by appointed Prime Minister Ünal Üstel, to restore former clauses in the Penal Code that were put in place during the reigns of King George V and King George VI. The draconian laws were used at the time to restrict criticism of The Crown and British rule in Cyprus.

The TRNC Government’s plans to reintroduce these abolished articles are aimed at protecting the Turkish Cypriot President Ersin Tatar, who has complained about the constant mocking he faces on social media.

Drawing parallels with the protection given to the Turkish President, who regularly uses similar laws to prosecute those who “insult” him, the proposed changes to the TRNC Penal Code would ban any kind of remark that would cause ‘discontent or disaffection between the Turkish Cypriot President and the people’. Under the current proposals, offenders found guilty of such remarks would be jailed.

In their bid to counter the government’s move, the TCJA has drafted alternative legislation for North Cyprus, which is in keeping with the European Union’s definition of freedom of speech.

Journalists, their mouths covered in black tape to denote attempts to silence them, sat in the TRNC Parliament’s gallery on Monday after being told the proposed changes to the Penal Code would be debated. That proved not to be the case, although opposition MPs did raise the issue and pledged to prevent the proposals from becoming law.

It’s not clear if PM Üstel will back down, but facing such solid media resistance, it seems highly likely that his government will be forced to either ditch or significantly modify their plans.

The journalists’ protest overshadowed the arrival on the island of Turkish Foreign Minister Mevlüt Çavuşoğlu, who met with President Tatar at the TRNC White House for discussions on the Cyprus Dispute.