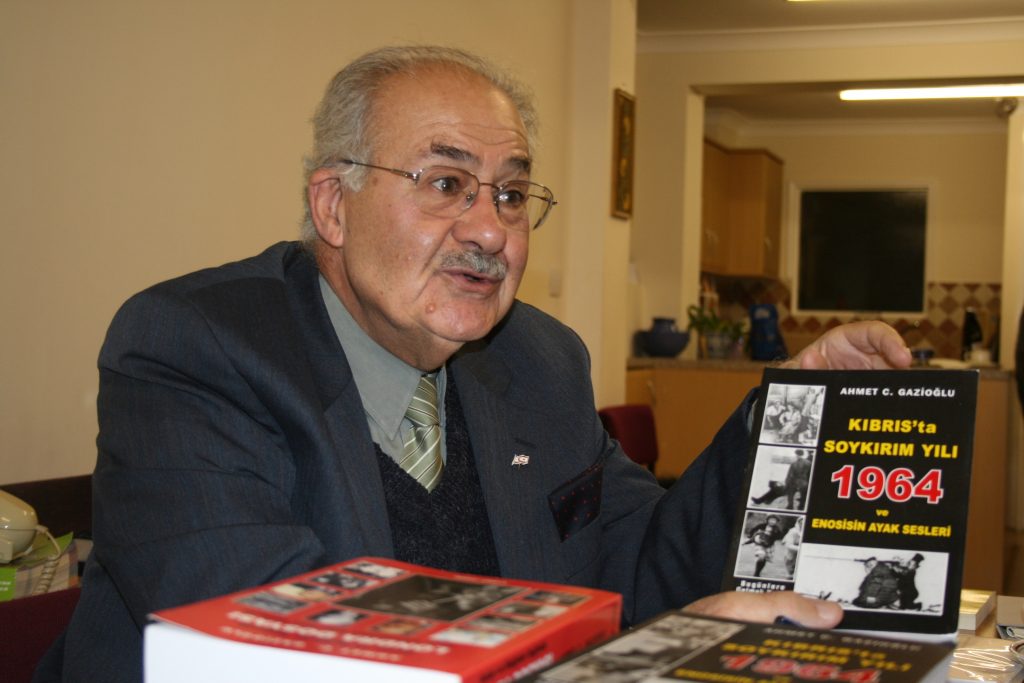 Ahmet Cemal Gazioğlu, who represented Turkish Cypriots in Britain after the collapse of the power-sharing Republic of Cyprus, has died aged 89.

The researcher, journalist and author passed away on Friday, 4 September, and was laid to rest in Lefkoşa Municipal Cemetery this morning.

The one-time advisor to Rauf Raif Denktaş, the founding President of the Turkish Republic of North Cyprus, Gazioğlu played a crucial role in the 1960s as a bridge between the oppressed Turkish Cypriot community in Cyprus and the diaspora in London.

Gazioğlu was appointed the first UK Representative of the Turkish Cypriot people, between 1964 and 1966.

A prolific chronicler of Cyprus’ recent history, Gazioğlu published numerous books, which remain a vital reference source for any student of the Cyprus Conflict.

Born in Larnaca in 1931, Gazioğlu went to university in Ankara and then on to the University of London, where he continued his studies in International Relations. He returned to Cyprus, where he worked as a history teacher and later headmaster during 1954 and 1962.

On 21 December 1963, the Greek Cypriots attacked Turkish Cypriots in a brutal coup, forcing their partners from government. Gazioğlu joined a core team of Turkish Cypriot activists including lawyer Rauf Denktaş to push back at this state of affairs.

The 10-day Bloody Christmas coup and subsequent assaults resulted in the deaths of hundreds of Turkish Cypriots, while thousands more were made homeless, as Greek Cypriot authorities destroyed 103 Turkish villages.

Gazioğlu officially represented the Cyprus’ Turkish community in the mid-1960s, highlighting the tragic events in Cyprus and pressing the British authorities to act. The UK is one of three Guarantor powers in Cyprus, and Turkish Cypriots therefore expected Britain to take a more active role in ending their oppression and help restore their political rights.

Taking briefings from young leader Rauf Denktaş, Gazioğlu would co-ordinate action with the Turkish Cypriot Aid Committee in London, headed by Oktay Hamit, which would hold demonstrations, and lobby the British authorities, while also raise funds to buy vital supplies for the thousands forced to live without even basic amenities in enclaves in Cyprus.

Based at the premises of the Kıbrıs Türk Cemiyeti [Cyprus Turkish Community] in D’Arblay Street, Soho, Gazioğlu also worked closely with the Turkish Embassy in London, headed at that time by Ambassador Zeki Kuneralp – the uncle of British Prime Minister Boris Johnson.

Such was his impact that in 1967 the Greek Cypriot government of Archbishop Makarios declared Gazioğlu to be persona non grata, and he was exiled to London for the next six years.

During his years in the British capital, Gazioğlu extensively researched official documents relating to Cyprus at the Public Record Office (now known as The National Archives). His findings, detailed in his many books, show a picture of intrigue and duplicity from the United Kingdom in Cypriot affairs.

Gazioğlu’s work came to greater international prominence with the publication of an English-language book titled, The Turks in Cyprus, A province of the Ottoman Empire (1571-1878), published by K. Rüstem & Brother in London in 1990. The booked focussed on the history of Turkish Cypriots in the context of the international role of Cyprus during three centuries under Ottoman rule.

In 1990, President Denktaş appointed him a Special Advisor, responsible for political research, a post he held for over a decade.

His knowledge meant he was frequently sought out as a media commentator and for a time, he also hosted his own current affairs programme on state broadcaster Bayrak Radio & Television (BRT).

One of Gazioğlu’s last published works was Londra Dosyası ve Sen Ben Kavgası [The London File and the You-Me Fight, CYREP] in 2006, where he carefully chronicled the role of British Turkish Cypriots in the Cyprus Conflict in the 1960s. He came to London the following year to promote it.

Gazioğlu was married with two children.