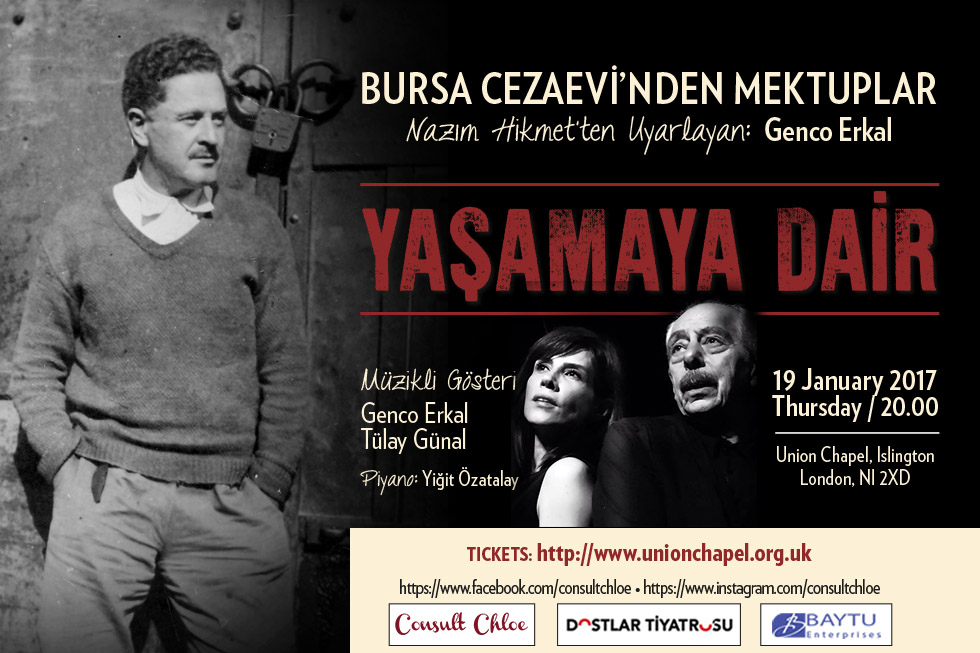 Erkal’s two-person show, set to music by Fazıl Say and Zülfü Livaneli, will visit London’s Union Chapel for one night only in January 2017. The performance will feature the seasoned actor alongside award-winning actress Tülay Günal, with live piano accompaniment by Yiğit Özatalay.

Islington’s beautiful Union Chapel – a Grade-I listed Gothic church – will be the setting for Yaşamaya Dair, which brings to life the letters and poems Hikmet wrote while imprisoned in Bursa for supposedly encouraging rebellion.

The play starts with Hikmet’s passionate prose to his beloved wife Piraye. Later, the spotlight turns on his long years in exile, and Hikmet’s love of Turkey and its people.

It was during his stint in Bursa Prison that Hikmet, considered by the Turkish public as a romantic communist, but a threat by the Turkish authorities, starting to pen what is widely regarded as one of his literary masterpieces, Memleketimden Insan Manzaralar (‘Human Landscapes from My Country’), which he concluded shortly before his death in 1963. Elements from this epic book of poems about ordinary folk in Turkey caught up in its wars, occupations, and battle for independence form the latter part of Erkal’s play.

Yaşamaya Dair is produced by Turkey’s respected Dostlar Tiyatrosu (Friends Theatre). Formed in 1969, it is known for staging progressive works that challenge established social and political thinking and values of the day.

Over the years, this award-winning theatre production company has become an educational and cultural institution, providing an important platform for writers and directors to experiment, as emerging and established actors continue to feature in its acclaimed works that are performed across Turkey and abroad.

Given the current political circumstances in Turkey and around the world, Nâzım Hikmet’s works remain as relevant as ever. Below is the translation of his poem Yaşamaya Dair / On Living.

Living is no joke,

you must live with great seriousness

I mean expecting nothing except and beyond living,

I mean living must be your whole occupation.

You must take living seriously,

I mean to such an extent that,

for example your arms are tied from your back, your back is on the wall,

or in a laboratory with your white shirt, with your huge eye glasses,

you must be able to die for people,

even for people you have never seen,

although nobody forced you to do this,

although you know that

living is the most real, most beautiful thing.

I mean you must take living so seriously that,

even when you are seventy, you must plant olive trees,

not because you think they will be left to your children,

because, I mean, life weighs heavier.

I mean, there is the possibility that

we will never get up from the white table.

we will still laugh at the funny joke being told,

we will look out of the window to see if it’s raining,

or we will wait impatiently

for the latest news from agencies.

Suppose, for something worth fighting for,

suppose we are on the battlefield.

we may fall on the ground on our face.

We will know this with a somewhat strange grudge,

the result of the war that will possibly last for years.

Suppose we are in the jail,

age is close to fifty,

supose there are still eighteen years until the iron door will open.

Still, we will live with the outer world,

with the people, animals, fights and winds

I mean, with the outer world beyond the walls.

I mean, however and wherever we are

we must live as if there is no death…

This earth will cool down,

a star among all the stars,

one of the tiniest,

I mean a grain of glitter in the blue velvet,

I mean this huge world of ours.

This earth will cool down one day,

in the pure endless darkness.

You must feel the pain of this now,

You must feel the grief right now.

You must love this world so much