Whose heritage is it? 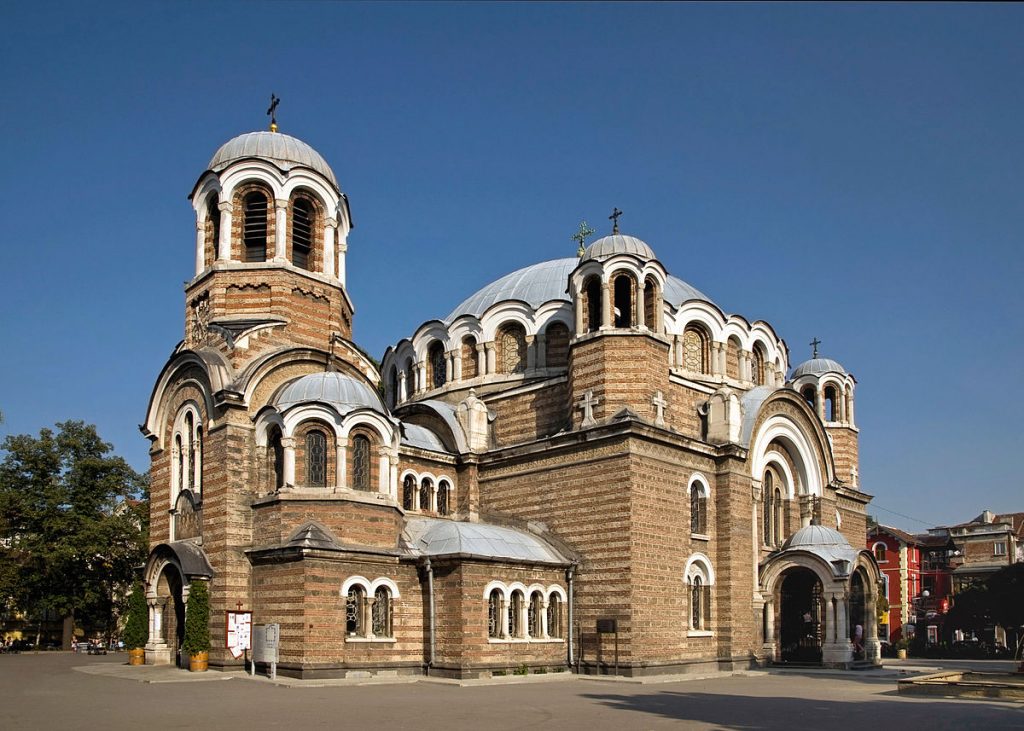 I was not planning to write about my trip to Sofia, Bulgaria, where I attended a conference on Cultural Heritage in Migration. We all had an intense discussion on this issue with the conference organisers and participants, and later my personal experience of heritage in Sofia left me to conclude that I must address this issue.

The question “Whose Heritage Is It?” as raised first by the cultural theorist and sociologist Stuart Hall on the definition of heritage baffled me throughout my stay in Sofia.

For many of us the word “heritage” connects us with the past, therefore a connection with history. But some historians have disputed and criticised mixing up both, distancing themselves such as David Rowenthall, who says heritage is not history at all: it is not an inquiry into the past, but a celebration of it. For him, like many historians, there must be a clear separation from both and from one another.

Keeping this statement by Rowenthall in mind, I would not like to elaborate on the discussion of controversy as I am not a historian. But as a social scientist I would like to raise some questions as to how heritage or history affects someone’s identity, especially how the past influences the identity, forms the feeling of belonging and how this transformation of identities formulates with people living away from ones country of origin, or from their parents/grandparents country of origin. And in this case, I will try to address how one can feel left confronting his/hers heritage and trying to balance with his/hers present identity while visiting another country.

The notion around the question of belonging and identity in connection with heritage becomes very complicated as heritage is subject to time and it changes with different identities and presents. Therefore, the present time and heritage cannot be separated from each other.

Bulgaria is a country where nearly for half a millennium Ottoman rule had a great deal of influence on the culture and surroundings, until its independence in 1878. The Ottomans left behind many mosques, fountains, baths, bridges, caravansaries and markets. The Islamic art and architecture can still be seen in some historic buildings and monuments.

After visiting Banya Bashi Mosque in Sofia, interestingly I found myself historically relating to this building especially discovering that it was built by the world renowned architect Mimar Sinan in 1576. But to my surprise, discovering that the mosque was left in disrepair with no refurbishment until very recently was indeed very disappointing.

It is worth mentioning that Mimar Sinan engineered the Banya Bashi Mosque over natural thermal spas in the mid-16th Century. The visibility of the steam rising from vents in the ground near the mosque walls makes it a unique architectural work of art.

The question around “Whose heritage is it?” must have, I think, begun bothering me first in Banya Bashi Mosque, as I was profoundly sad knowing that not much emphasis, actually no credit was given to the great architect Mimar Sinan.

Further into my research I found the existence of what appears to be another masterpiece by Mimar Sinan, which was built in 1528 and called Black Mosque (Kara Camii). This mosque, with exceptional architecture, was abandoned after the independence of Bulgaria from the Ottomans and became a warehouse and prison for a while, before being converted into a church in 1903 and re-named Sveti Sedmochislenitsi Church.

With the help of my colleague Liana Galabova in Sofia, I was able to get more information on the history of the Black Mosque, which enlightened me more as I had difficulties finding any sources. Some historical material surprisingly says that it is ‘believed’, but not certain, that the mosque was built by Mimar Sinan, but no further information is to be found.

It is easier to find information about the architects who came up with the idea of converting and redesigning the Black Mosque into a church than the main architect. With my limited resources, I read in one of the papers sent to me in Bulgarian (thanks to the Google translation) that the well-known seventeenth century traveller Evliya Celebi mentions the mosque with reference to Mimar Sinan in his writings. So far, my research indicates the architect was Mimar Sinan, but as art historians are the experts, they should dig deeper as it will be very interesting to establish which talented architect apart from Mimar Sinan could have designed and constructed the Black Mosque in Bulgaria during the Ottoman Period.

Unfortunately Banya Bashi Mosque is now the only existing mosque in Sofia. Many were destroyed through neglect after independence, especially during the political turmoil period in the 1970s and 1980s, which targeted the Bulgarian Turks.

Here, I do not wish to tackle the issue of “heritage industry” with regard to whose heritage governments in general protect, or promote. Heritage policies are generally highly politicised and often part of a wider government agenda. This not only occurs in Bulgaria, but with governments all around the world.

Heritage does not simply reflect the past, but also shapes present reality and tries to give us sense to understand the world around us into the future which is the main concern of this article. As the foundation of collective and individual identity lies in the past, buildings symbolise the shared cultural heritage and in return our individual identity reciprocates with its own creative and unique responses.

Perhaps it is or was my personal attachment to Mimar Sinan’s architecture considering I still visit Süleymaniye Mosque each time I am in Istanbul. The historic building, which is in the centre of old Istanbul, is an area which I have known since my childhood and provides me with a strong feeling of belonging. I am acquainted with this part of the city and have many fond memories.

Even with my limited time while I am in Istanbul, I often find myself sitting in the gardens of the Süleymaniye Mosque and observing the incredible building from outside. I do not go into the mosque as the beauty of the architecture captures me with calm and tranquillity, where the harmony of the space is the result of the masterful work of Mimar Sinan. The silence in the garden offers a place of serenity against the busy, noisy city of Istanbul.

The self-identity of people depends on remembered meanings. Heritage allows people to have some social identification whether on an individual or social level. It is the journey from the past to present in which I probably took the journey unconsciously through my memories that were invoked whilst visiting the Banya Bashi and Black Mosque/ Sveti Sedmochislenitsi Church in Sofia. My memories of the Süleymaniye Mosque from the past gave a sense of belonging and the work by the architect Mimar Sinan became a part of my collective heritage, which came together. This has demonstrated that memory is the mirror of the past and it is only visible if it finds a way to come out. Like heritage, memories are the foundation of the identity and forms the present, it is the understanding of his/hers environment/surrounding.

In the same context, the buildings of Mimar Sinan in Sofia, or Mimar Sinan as an architect – even if it is not acknowledged by the current government’s official agencies – is still part of Bulgaria’s rich heritage. Bulgaria’s heritage industry chooses what to conserve from the past and what to discard. But from the memories of which to keep and which to forget, or which to demolish and maintain, is left to the nation and its people, with their shared memories and heritage.

I believe in the question of “Whose heritage is it?” as it is important to build bridges between the different experiences. By recognising the shared heritage with a direct link to history can foster, in the 21st century, strong societies with a common understanding for the future.

As memory is our ability to store, retain or recall information from past experiences, it is interesting to observe how the brain constructs the elements in the question of belonging with special reference to people away from their country of origin or living with his/her parents/grandparents’ country of origin.

The brain sums up overall what we remember and brings it to a surface when the need and demand of the memory is desired. Memory is like a diary, as Oscar Wilde said, and it has been carried everywhere. The pages of a diary open when the need for reading is desired. This certainly applies to people who were born or brought up away from their parents/grandparents’ country of origin, in what can be termed as ‘people with multi-cultural heritage’.

Memories of my Turkish heritage opened its pages while I was visiting Sofia. It connected unconsciously with the collective Turkish heritage which forms part of my identity. Through this identity I felt connected to Banya Bashi and Black Mosque where my memories came to the surface with an inherent historic and cultural meaning.

My memories transferred my positive memories from Süleymaniye Mosque to Banya Bashi Mosque, where again, outside of the mosque, I found a sense of tranquillity, yet seeing the neglect of the building also left me disappointed.

Certainly, it is important to mention that the diary of my memory will open its pages sometime in the future, for example when I am suddenly again seeing a building. Or perhaps the next time I am listening to a song when I will not connect necessarily to the memories of my Turkish heritage but to my memories from my childhood where I partly grew up and adapted to the German culture.

I will carry the diaries full of memories with me all the time and will add new pages with new memories. The pages of my diary are very long as over the last decade living in Britain with shared British culture has made my memories rich and vibrant.

On the question of “Whose Heritage is it?” we should not only be working on what we take with us as heritage, but more importantly what we will leave behind us as “Collective and Shared  Heritage”.

Semra Eren-Nijhar is the founder of the ‘Turkish Heritage in the UK’ initiative and the founder the “Turkish Heritage Day in London” which launched on December 8th 2014 in London, UK and an author, sociologist, documentary film maker & policy consultant on diversity, migration, Turkish people living in Europe and the Executive Director of SUNCUT.

Main photo above: the Sveti Sedmochislenitsi Church in Sophia, Bulgaria,. Formerly known as the Black Mosque, it is thought to have been built by famous Ottoman architect Mimar Sinan. Photo by Plamen Agov, Lemon Tree Studio / Wikipedia.