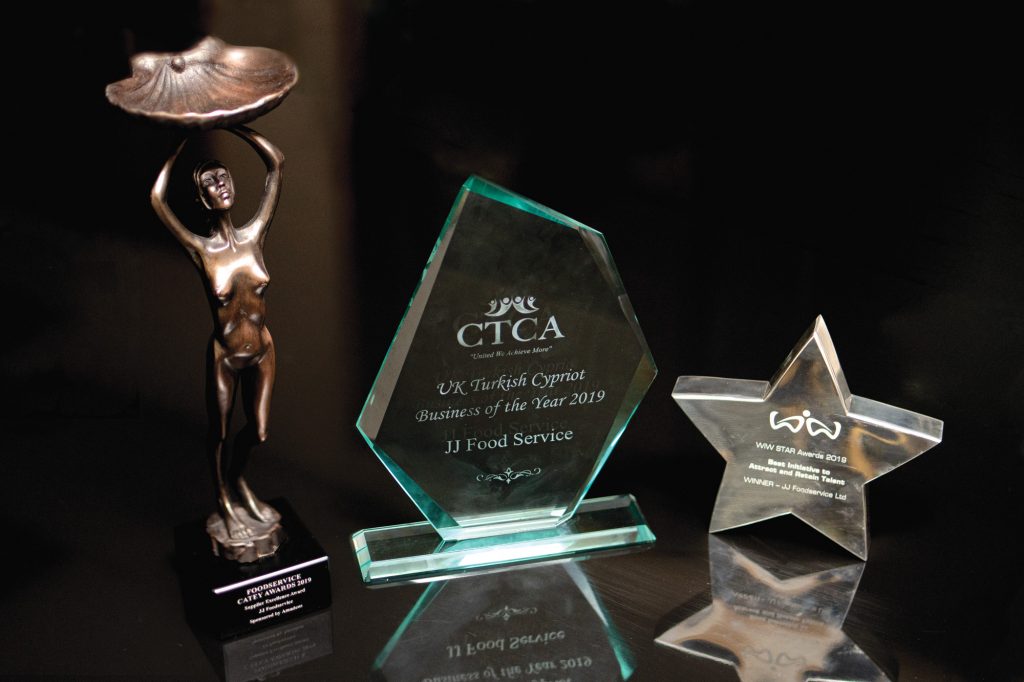 On Thursday, 10 October, the JJ team were in Central London for the Women in Wholesale STAR Awards.

The wholesaler has been spearheading industry efforts to actively recruit more females into various warehouse roles, and its ambitious targets, which include ensuring 50% of all its warehouse management are women, has not gone unnoticed.

The judges applauded JJ’s “Warehouse Women” campaign, commenting that the initiative was a ‘True industry first’, and awarded the firm the Best Initiative to Retain and Develop Talent Award.

Hot off the heels of the first Award, the JJ team scooped the Supplier Excellence Award at the Foodservice Cateys, beating its biggest competitors in the process. The event, which took place at the Park Plaza Westminster on Friday 11th October, was attended by Britain’s top caterers.

JJ was commended for its investment in Telematics to reduce carbon emissions and its Amazon-style ordering system, which has helped to dramatically improve the speed and convenience of deliveries.

Helping to secure a hat trick of accolades, JJ’s founder and CEO Mustafa Kiamil picked up the Business of the Year trophy at the UK’s Council of Turkish Cypriot Associations (CTCA UK) Awards Ceremony on Saturday 12th October at the Royal National Hotel in London.

On the night, guests were told that JJs was Britain’s largest and most easily recognised Turkish-Cypriot owned brand. The CTCA jury also noted the rapid growth of the firm, which this year is celebrating its thirtieth anniversary, and its impressive investment in technology and environmentally-friendly business practices.

Mr Kiamil, commented on the win:

“This was a fantastic opportunity to connect with many of our existing customers and the local Turkish Cypriot community. By chance, we even had two restaurant customers on our table. We’d like to thank our customers, suppliers and our team for their continued support.”

The first national wholesaler to take customer orders online back in 2009, today the majority of JJ’s sales come from orders placed online, adding to the firm’s efficient, paperless systems. Its recent innovations include the launch of Fingerprint ID and One Tap Pay for the JJ app, available via smart phones and tablets, to make online ordering faster and safer for customers.

Orders placed online or over the phone by 9pm are delivered the next working day, with same-day collection available for all customers from 11 branches nationwide, which are open seven days a week.