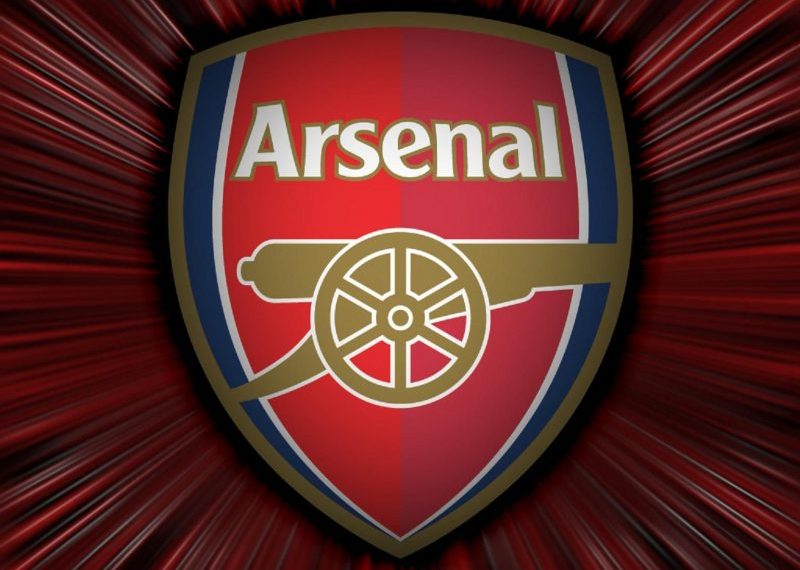 Arsenal Football Club has revised its communications policy after a leading community group accused the club of “double standards”.

The complaint was made by the Council of Turkish Cypriot Associations in an open letter sent to the board of the North London club last month.

Penned by CTCA chair Ertuğrul Mehmet, the powerfully worded letter drew attention to Arsenal’s contrasting approaches to political tweets by three of its players, Mesut Özil, Pierre-Emerick Aubameyang and Héctor Bellerín, and called on the club to rectify its contradictory position.

Last year, Özil highlighted the plight of Uyghur Turks at the hands of the Chinese, and called on Muslims worldwide to take action to end the Uyghur’s persecution. The message, in Turkish with text laid over the East Turkestan flag – the homeland of Uyghur Turks, was posted on Instagram and Twitter on 13 December 2019.

“The content published is Özil’s personal opinion. As a football club, Arsenal has always adhered to the principle of not involving itself in politics.”

The club’s statement appeared on Weibo – a leading Chinese social media site – as well as other platforms, leading many to conclude its response was primarily to limit the damage to its commercial interests in China.

Despite this, China’s state broadcaster CCTV dropped its planned coverage of Arsenal’s Premier League game against Manchester City the following day, while Özil’s comments were condemned by the Chinese Foreign Ministry and the Chinese FA.

Özil was also removed from Chinese editions of the Pro Evolution Soccer video game, and his profile was erased from the social media platform Weibo, on which he had four million followers.

Arsenal’s business ties in China include a chain of restaurants, and partnerships in a lottery and with a vehicle provider. The club also generates significant income from lucrative broadcasting rights of its games in the vast Far Eastern country with a population of 1.4 billion.

Arsenal’s response to comments by Özil, who is an openly pious Muslim of Turkish origin, was markedly different to how it reacted to social media posts by Héctor Bellerín and Gabonese striker Pierre-Emerick Aubameyang.

When Bellerín made an overtly political, and in part offensive, tweet just before last December’s British General Election, the club chose not to make any public statement at all.

The Spanish right back tweeted: “Young people across the world have a chance to change what the future can be. Today’s the chance for all the British people to influence what your future and those living here holds. #FuckBoris #GoVote”

The North London club left itself open to even more criticism of “double standards” in October of this year when the Arsenal FC Twitter account posted a message of solidarity for Aubameyang and his support of young Nigerians protesting against police brutality.

“Nigeria [green heart]. We see you, we hear you, we feel you, we have read your replies, we have seen the footage. We cannot imagine the pain. Our thoughts are with everyone in Nigeria. Stay Safe,” tweeted Arsenal FC Twitter on 24 October, 2020.

The contradictory positions adopted by Arsenal infuriated Turkish fans and made a mockery of the club’s claims of being “apolitical”. Several Turkish Cypriot fans asked the CTCA to raise the issue with Arsenal.

What did CTCA say to Arsenal?

CTCA chair Ertuğrul Mehmet’s letter to Arsenal’s Executive Committee on 11 November was covered extensively by the British and international press.

Citing the different responses to political statements by Mesut Özil, Héctor Bellerín, and Pierre-Emerick Aubameyang, Mr Mehmet said Arsenal was “discriminating” against Özil for taking a stand against the Chinese Government, while adding there had been “damage” to the club’s reputation and relationship with its “Turkish fan base.”

Mr Mehmet called on the club to rectify this by issuing a “public statement in support of Mesüt Özil and the plight of Uighur Turks”.

The CTCA head noted that in contrast to how Arsenal responded to Özil’s statement, “no one at the club felt it was necessary to issue a statement distancing the club from Bellerín’s [General Election] comment”, despite the player making an overtly political comment, which had also used “offensive language.”

The Turkish Cypriot body also labelled Arsenal’s strong public support of Aubameyang’s political comments about the violence in Nigeria as, “Yet another case of double standards.”

Mr Mehmet noted that global awareness of the Uyghur issue had grown significantly since Özil’s social media posts, and asked whether that had prompted a different attitude at Arsenal:

“When Özil made his stand against the activities of Chinese Communist party in December 2019, the British Turkish community had no real understanding of the extent of persecution, humiliation and degradation Uighurs were being subjected to. I can only imagine that the Executive Committee too did not have the benefit of this information.”

“In the 11 months that have followed we have seen an explosion of reporting in the national press. With special reports from Channel 4, BBC and ITV who in September ran 3 ten minute reports interviewing Uighurs who had managed to escape to Turkey, retelling the horrific torture they had been subjected to Uighur women forcibly sterilised while others are forced to live with Chinese men while their husbands are imprisoned; Uighur women raped and forced to bear children; Uighur children separated from their parents and placed into state run orphanages; Mosques and cemeteries destroyed; The Uighur Turkic language banned.

“Given that we all now know beyond any doubt, that the Chinese Government are engaged in the biggest systematic ethnic cleansing program since Hitler’s final solution, our community would like to know if Arsenal has changed its position.”

Acknowledging the club’s commercial interests in China, Mr Mehmet added: “The club may have significant commercial interest in China, yet by discriminating against a single player who has made a public stand against the Chinese Government, there is a very real threat of damage by association. Damage to the clubs relationship with the north London Turkish fan base and the many Arsenal fans in Turkey and in the Turkish Republic of Northern Cyprus.”

How did Arsenal respond?

With the letter generating extensive media interest, CTCA didn’t need to wait long for a response from the Premier League side.

Following the hour-long meeting, where there was a candid exchange of views by both sides, Mr Gonella sent a formal written response to CTCA.

The letter, dated 23 November, started with the communications director confirming he was now more familiar with the issues the Turkish community faces “across Europe and beyond”, and that he would “ensure these are more widely understood within the Arsenal’s Executive Team.”

Gonella underlined Arsenal’s commitment to “equality and diversity”, which he said is “at the heart of what we do as a club”, and he rejected the accusation that the club had discriminated against Mesut Özil, stating “this is simply not true”. 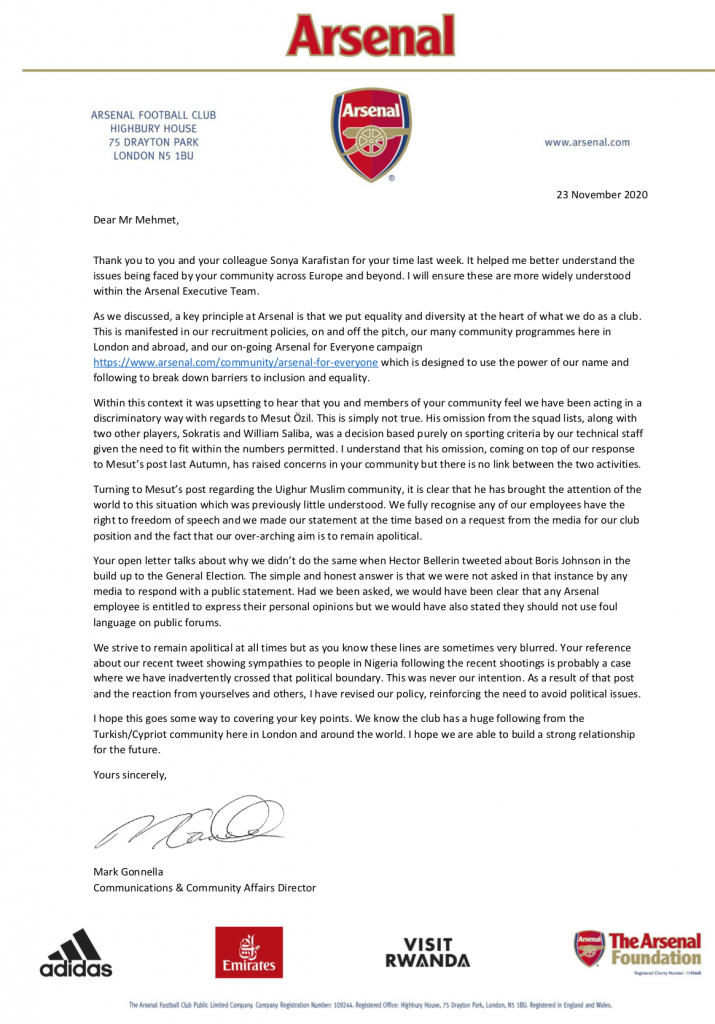 The communications director said Özil’s exclusion from the squad lists “was a decision based purely on sporting criteria”.

He added that the club respects its employees “have the right to freedom of speech”, and that the reason why they issued a response to Özil’s social media post and not Hector Bellerin was because media had asked for a response for the former, but not the latter.

Gonella did, however, concede they had got it wrong with Pierre-Emerick Aubameyang and the solidarity post for Nigeria: “We strive to remain apolitical at all times, but as you know these lines are sometimes very blurred. Your reference about our recent tweet showing sympathies to people in Nigeria following the recent shootings is probably a case where we have inadvertently crossed the political boundary.”

As a result of the “reaction” from CTCA and others about Arsenal’s Nigeria post,  the communications director said he had “revised our policy, reinforcing the need to avoid political issues.”

Gonella ended by noting the club’s huge “Turkish/Cypriot” following in London and around the world, and that he hoped “to build a strong relationship for the future.”

One of the critics was Çiğdem Hüseyin Mehmet Türkân, who wrote, “I work in football and one of my roles is at Arsenal, so I’ll be measured in my response – but as lifelong fans of the Club, I just don’t feel our values align at this point. I’m really proud of our community for challenging the Club but knowing what I know, whilst I am pleased they’ve reached out and discussed things, I am not convinced by the response.” 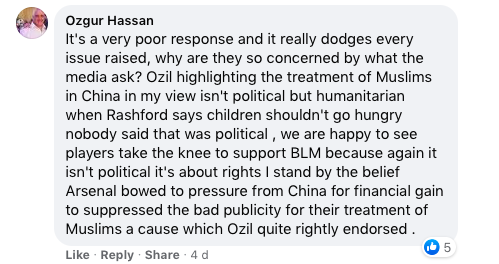 Ozgur Hassan was also critical of the Arsenal’s efforts to treat Özil’s post on the plight of Uyghurs as “political”, given its “humanitarian” dimension, comparing the positive response of clubs to other issues such as Marcus Rashford’s campaign to combat child poverty and the Black Lives Matter movement.

“It’s a very poor response and it really dodges every issue raised, why are they so concerned by what the media ask? Ozil highlighting the treatment of Muslims in China in my view isn’t political but humanitarian when Rashford says children shouldn’t go hungry nobody said that was political , we are happy to see players take the knee to support BLM because again it isn’t political it’s about rights I stand by the belief Arsenal bowed to pressure from China for financial gain to suppressed [sic] the bad publicity for their treatment of Muslims a cause which Ozil quite rightly endorsed.”

Many praised CTCA for challenging Arsenal over its hypocritical stance, and noted that at least the club had acknowledged its inconsistencies.

Ergin Balli wrote, “The response is poor, but it is a positive incremental step forward. It’s put the issue on the agenda and it’s made Arsenal modify its behaviour. Arsenal are not publicly going to admit any wrong doing, but behind the scenes this is a ‘marker’.”

This isn’t the only time Arsenal has landed itself in hot water with Turkish Cypriots. In 2006, season ticket holder Mete Ahmed was one of thousands of fans who answered the club’s call to decorate the newly opened Emirates Stadium with their national flags to reflect the club’s diversity.

After a few weeks Ahmed, who is of Turkish Cypriot origin, was told by a steward that he could not display the flag of the Turkish Republic of North Cyprus – his ethnic homeland – on the wall in front of his seat because of the objections of some fans. 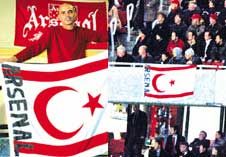 When Ahmed refused to comply with the request, the club consulted with the police and was told there was nothing illegal about the flag, and Ahmed continued to fly his TRNC flag proudly.

Angered by this development, Greek Cypriot fans launched a petition on the iGreek website to get Arsenal to ban the flag on the grounds that the TRNC is not internationally recognised. Some 10,000 people signed the petition, which ended up the subject of police complaints.

Analysis by human rights group Embargoed! found a third of the comments were racist, many using highly inflammatory language that included threats to Mete Ahmed and Turks in general.

Arsenal tried to placate both sides, holding meetings with Ahmed and his representative, and those behind the petition. The club eventually concluded it would be unfair to single out the TRNC flag and instead, in a bid to draw a line under the saga, in December 2006 announced it was banning all national flags from its Emirates Stadium.