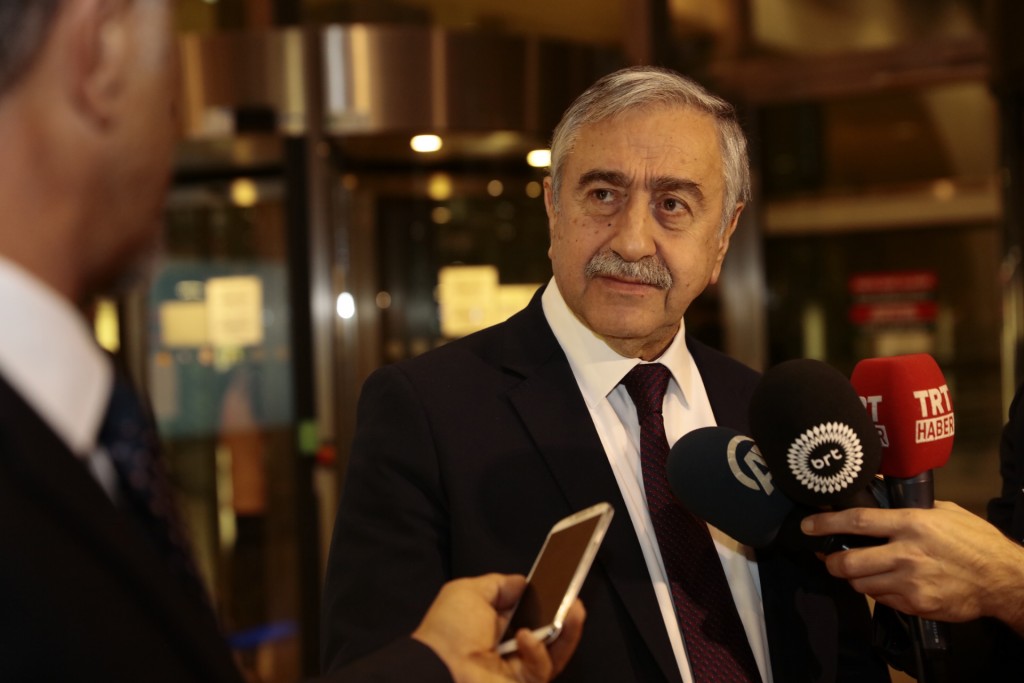 “Unfortunately, we have just been informed by the #UN that, due to the Turkish Cypriot leader’s refusal to attend, tomorrow’s scheduled meeting will not take place,” Anastasiades’ spokesman Nicos Christodoulides tweeted earlier today.

The crisis between the two leaders blew up a fortnight ago following a decision by the Greek Cypriot Parliament on 10 Feb. to introduce an annual ‘Enosis Day’ in schools. The controversial celebration would mark the 1950 Enosis (‘union with Greece’) referendum among Greek Cypriots, which received 95% backing.

Far-right party ELAM had tabled the motion and received support from other hard-line independent parties. Left-wingers AKEL voted against the motion, but DISY – the conservative party President Anastasiades formerly headed – decided to abstain, ensuring the vote was carried by just 19 of a possible 56 MPs.

In a rare moment of unity for Turkish Cypriots, there was universal condemnation against the decision from across the entire political spectrum in North Cyprus.

TRNC President Akıncı said it was “a serious blow to the solution process in Cyprus” as it gave the wrong message to Greek Cypriot youth. He called on Nicos Anastasiades to take a firm stance on the issue and reverse the decision.

Speaker of Parliament Sibel Siber released a statement on behalf of the Turkish Cypriot Assembly strongly condemning the move by their Greek Cypriot peers. The statement, which was backed by all political parties and independent MPs in the TRNC Parliament, said:

“This decision has been perceived as an act of disrespect to the main philosophy of the negotiations, has deepened the Turkish Cypriot people’s mistrust and raised doubts regarding the Greek Cypriot side’s intention and goodwill towards reaching a settlement on the basis of UN parameters.”

The declaration called on the Greek Cypriot side to retract the decision, which it described as a historic mistake that could have “irreversible consequences”.

Şener Elcil, head of teaching union KTÖS, also slammed the “provocative” development. He called the plans for an annual Enosis commemoration a step towards turning Cyprus into a “Hellenic Republic”, which went against the principles of the Republic of Cyprus. Elcil said his union was prepared to challenge this in court and also called for “the activities of fascist ELAM to be banned”.

The push for Enosis during the 1950s and 60s left deep scars in Cyprus. It is viewed fearfully by Turkish Cypriots and left-leaning Greek Cypriots, who were targeted in a bloody campaign waged by Greek Cypriot nationalists, resulting in the deaths of hundreds of innocent people.

The movement is regarded as the roots of the current conflict. While its role in the island’s history cannot be doubted, what has caused outrage is the desire to present this event as a cause for celebration among young Greek Cypriots.

The danger was highlighted by President Akıncı in a letter to United Nations Secretary-General Antonio Guterres last week. “Enosis was the main reason for the Cyprus problem, and this movement has brought nothing but pain and sorrow to Cyprus,” wrote Akıncı, adding that this decision would sow the seeds of division in the minds of future generations and make all confidence-building measures pointless.

Responding to the furore in the North, President Anastasiades issued a statement where he accused the Turkish Cypriot side of overreacting. He claimed the decision was “a mere reference to an historical fact” that did not constitute a change of policy. But not everyone in the South agrees.

Former Greek Cypriot Foreign Minister Erato Kozakou Marcoullis has backed Akıncı’s stance on the matter. In a statement she posted in Greek and English on her Facebook page on 11 Feb, Marcoullis said:

“I anticipated the reaction of the Turkish Cypriot leader and this time he is 100% right. I also call on President Anastasiades to undo this unacceptable ELAM initiative, which is meant to derail the process of reunification and dangerously sow more seeds of mistrust between Greek and Turkish Cypriots. We should give the message that we are seeking a free and reunited common homeland and that we condemn regressions to nationalist outbreaks of another era belonging to history, which should be considered a definite and irrevocable past.”

Tensions boil over as leaders walk out on talks

The ‘Enosis crisis’ now threatens the Cyprus Talks. The planned meeting between the Chief Negotiators on 14 Feb. was called off and the issue dominated the agenda when the two leaders met face-to-face in the UN Buffer Zone last Thursday, 16 Feb.

Following a heated exchange, President Anastasiades said he had nothing further to add and walked out of the room, slamming the door behind him. He later claimed he had gone out for a cigarette break. However, by the time he returned the Turkish Cypriot side had left the building.

President Akıncı countered by stating that in the past, the Greek Cypriot leader would calmly indicate he was going out for a cigarette break by pointing to his cigarette pack. That was not the case on this occasion:

“After Anastasiades finished his speech, the UN adviser on Cyprus [Espen Barth] Eide took the floor to summarise the issue. The Greek Cypriot leader angrily said: ‘I have nothing to say’ and slammed the door. There was nothing left to do at that point.”

Amid the recriminations, the UN has sought to calm things down and keep the focus on the negotiations. After Thursday’s meeting, Eide, who has been overseeing the peace talks for the past two years, said:

“Both leaders very strongly said they are committed to this process, and nobody sees this process as over, or terminated, or suspended.”

Akıncı: Anastasiades is “free to reopen the slammed door”

The Turkish Cypriot leader however is in no rush to return to the table under the current circumstances. He told the media his Greek Cypriot counterpart is “free to reopen the slammed door” and on Monday called on Anastasiades to tackle the issue by taking appropriate measures:

“Firstly, the Greek Cypriot leader should give a clear message to the Turkish Cypriot people and to the world that he does not support this decision (Enosis decision), and the second is to overturn it. Otherwise, it will not be possible to make progress in the negotiations.”

Akıncı said 67 years after the plebiscite, Enosis continues to sow the seeds of Hellenism in the minds of Greek Cypriots. He again emphasised the growing influence of ELAM, a far-right party, which openly encourages attacks on Turkish Cypriots. The Turkish Cypriot leader noted that even with just two MPs, the party had managed to succeed in getting its will through the Greek Cypriot Parliament.

Many Greek Cypriots have also condemned the Enosis vote, among them Loucas Charalambous. In an article called Disy’s abstention on Enosis vote was despicable, the columnist accused the party’s leader Averof Neophytou of becoming “a promoter of Elam”.

In a bid to overturn the tide of negativity that has hit them, DISY has tabled a new legislative motion that would remove power from the Greek Cypriot Parliament to determine school commemorations. Instead, these decisions would be taken by the Education ministry. If passed, it will allow Anastasiades’ government to repeal the earlier Enosis motion.