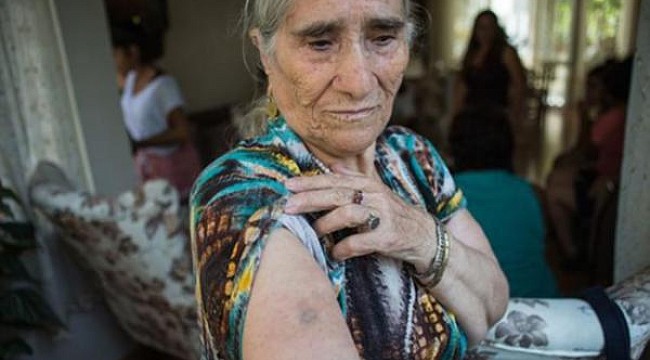 Mothers are sacred, not only according to Turkish customs, but also in the Islamic faith. Yet on Saturday 25 August, elderly mothers felt the full force of the Turkish authorities after failing to heed a ban on their weekly gathering in central Istanbul to peacefully demand news about the fate of their missing relatives.

Dozens were detained, including 82-year-old activist Emine Ocak (pictured top), during the 700th vigil of Saturday Mothers. Three generations of families had joined Ocak and the other pensioners, gathering at their usual spot in Galatasaray Square on İstiklal Caddesi just before midday, along with trade unionists, journalists, rights activists and opposition MPs.

Among the MPs who took part in the sit-in were Sezgin Tanrıkulu, Onursal Adıgüzel, and Ali Şeker from the Republican People’s Party (CHP), and Pervin Buldan and Sezai Temelli, co-chairs of the Peoples’ Democrat Party (HDP), together with HDP MPs Garo Paylan, Ahmet Şık and Erkan Baş.

Their presence was not enough, however, to prevent heavy-handed law enforcement stepping in. Police officers used water cannon and tear gas against the peaceful protestors, who were also beaten with batons as they were dragged away from the square. All have since been released after questioning, many claiming they had been left handcuffed in hot police vans for hours.

Photos of Ocak, a co-founder of the 23-year-old group Cumartesi Anneler (Saturday Mothers), being manhandled as she was detained featured in news reports that went worldwide. It prompted many international human rights organisations to criticise the Turkish government’s crackdown, including Emma Sinclair-Webb from Human Rights Watch who slammed the authorities for the “shameful, cruel treatment of families seeking justice for state crimes.”

Ocak’s son Hasan was just 23 when he went missing in 1995. She and the mothers of other victims who also disappeared during the state of emergency in Turkey during the 1990s have met at midday every Saturday since their first vigil on 27 May 1995. Influenced by Argentina’s Mothers of the Plaza de Mayo, Turkey’s equivalent group silently sit holding photos of their missing loved ones, some may recite poems. Their weekly appearance aims to maintain public awareness about the need for justice for the 790 plus victims of state-enforced disappearances and murders, which mostly took place in eastern Turkey twenty years ago at the height of the state’s battle with Kurdish terror groups.

Emine Ocak: “When the female police officers were pulling me, it hurt but when I saw my children being beat on the floor, my heart burned… I have been there [in that spot] for years wanting justice. I didn’t kill anyone, I have never harmed anything.”

Among the group’s principal demands are for the state archives to be opened, so families and the wider public can learn about this dark era in Turkey’s recent history, and for those with missing relatives to try and find their loved ones and give them a proper burial. Saturday Mothers also want the Turkish penal code changed, removing the statute of limitation for political crimes where victims were killed while in state custody to ensure those responsible can be brought to justice regardless of how much time has lapsed since the offence.

During the early years of their protest, Saturday Mothers faced regular police assaults and arrests, which eventually took its toll on the group and brought a halt to their peaceful demonstrations in March 1999. They resumed their weekly street sit-in a decade later, on 31 January 2009, initially with the blessing of the AKP government. In 2011, Recep Tayyip Erdoğan, then Prime Minister, even met with representatives from Saturday Mothers, including Hüseyin Ocak, brother of Hasan, promising them justice.

The sudden U-turn in the Turkish government’s policy was initially announced by Istanbul Governor Vasip Şahin last Friday, 24 August, who banned the vigil at short notice. Şahin claimed the Saturday Mothers’ protest had been hijacked by terror groups, pointing to the fact details of their 700th vigil had been posted on social media groups sympathetic to Kurdish terror group the PKK.

Turkey’s Interior Minister Süleyman Soylu confirmed this was the rationale behind the ban at an event in Ankara on Monday, stating the vigil was being ‘exploited by terrorists’. Responding to criticism from opposition parties about the treatment of protestors at the weekend, Soylu asked, “Should we turn a blind eye to the exploitation of motherhood by a terrorist organisation?”, adding, “They try to create victimisation out of the concept of motherhood in order to mask terrorism and polarise society.”

Soylu’s comments drew a swift rebuke from the relatives involved in Saturday Mothers. At a press conference held on Monday, 27 August, a statement read out on their behalf said:

“Soylu’s statement aims to distort the facts, defame the legitimacy of the Saturday vigils and cover the state’s responsibility.”

During the press conference Mikail Kırbayır, whose brother Cemil Kırbayır disappeared in the 90s, said: “The duty [of the minister] should be to listen to us, not disperse us.”

CHP MP Tanrıkulu also responded to Soylu via his Twitter account, writing: “The deep state, which we have been endowed with and have made deeper, has committed murders of whose perpetrators are unknown and the disappearance of people by force, but no one can ask for an account. Even if they are a mother, they cannot mourn.”

In an exclusive interview with Turkish daily Cumhuriyet, elderly activist Ocak and her family explained the events on Saturday. That as soon as they had begun to assemble that morning, the police had tried to prevent them. Mothers had been joined by their children and grandchildren, as well their extended families who thought they could protect them. Instead, things quickly escalated as the police used highly aggressive tactics to try and disperse them, and when that failed, they were fired on with water cannons and tear gas.

Showing the bruises on her arm to Cumhuriyet’s journalists (top photo), the octogenarian who walks with a stick said, “When the female police officers were pulling me, it hurt but when I saw my children being beat on the floor, my heart burned… I have been there [in that spot] for years wanting justice. I didn’t kill anyone, I have never harmed anything.”

She called on the President and his Interior Minister to respond, “Erdoğan and Soylu should answer, when did we ever even harm an ant?”

Defiantly, Ocak said she would return to Galatasary Square this Saturday to resume her protest, which was not just for her missing son, but for all those grieving: “I went there for mothers, for fathers, for those youths without a grave, for my people, for all peoples. I lost a Hasan, I gained 1,000 Hasan.”