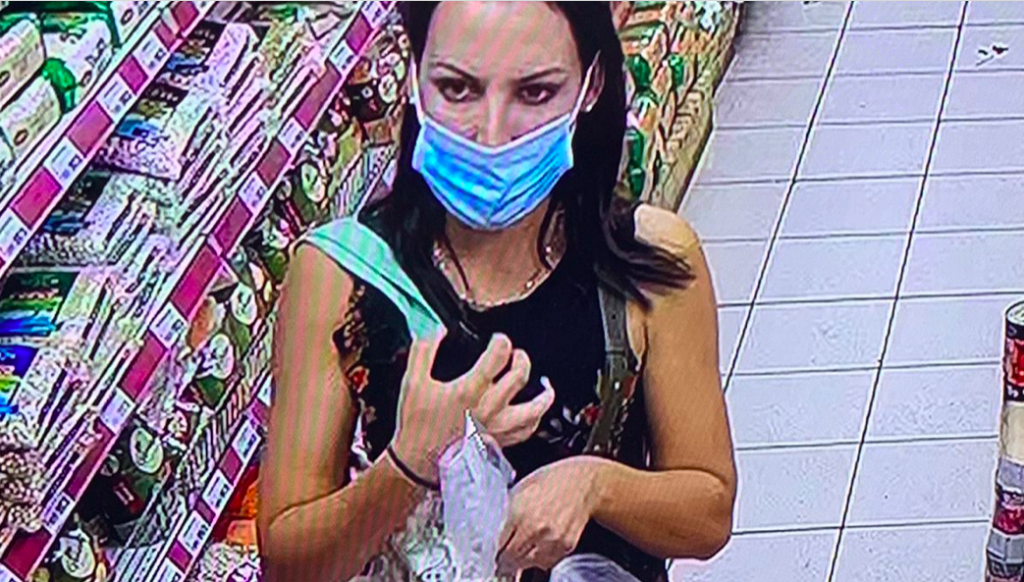 The family of a seventy year old man whose wallet was stolen while out shopping in North London have appealed to the public to help identify the suspect.

The elderly gentleman was in a supermarket on Hertford Road, Enfield, EN3, at about 11am on Saturday, 1 August when a woman came up behind him and took his wallet from his back trouser pocket.

The entire incident was captured by the store’s CCTV, which has provided clear photos of the suspect, a dark-haired lady in her twenties or thirties wearing a sleeveless, knee-length black summer dress with red rose motifs, and flat black sandals.

The woman had a distinctive large shoulder bag with bird prints and aqua-coloured straps, and a second, smaller, dark green, crossbody bag with a silver fastener.

She is seen following the gentleman, who uses a walking stick, around the shop as he carried a red shopping basket.

After the theft, CCTV shows the suspected pickpocket clutching the wallet, as she turns and walks back down the aisle she came from.

The theft only came to light when the gentleman – the father of Turkish Cypriot businessman Kenan Nafi – went to pay.

Mr Nafi told T-VINE: “My father is very upset. His main concern is that he had a document of great sentimental value in the wallet, which he desperately wants back. He doesn’t want the money or anything else, just the document.”

Mr Nafi called the pickpocket “heartless” for her actions, and appealed to the public to help catch the culprit and to find his father’s wallet.