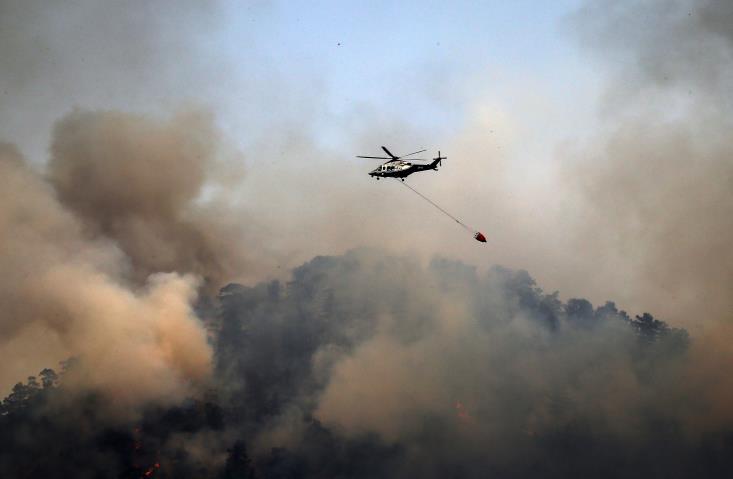 The TRNC and Turkey are set to join Greek Cypriots and an international emergency team battling against a devastating blaze in the Troodos Mountains.

The fire broke out in Evrychou (Evrihu), a village in the foothills of Troodos six miles away from Lefke in the TRNC and 31 miles southwest of Nicosia, on Sunday. Police believe it was accidental due to a 12-year-old boy playing with a cigarette lighter.

Fanned by strong winds and temperatures in excess of 40C, the fire quickly took hold, burning an area some 6 sq miles in three days. Four villages have already been evacuated, and there are fears the fire could spread further, as the wind and scorching heat hamper firefighters’ efforts to bring it under control.

On Sunday, a vehicle carrying firemen from the Forestry Department overturned in Troodos, critically injuring three men. Soon after Andreas Sofocleous, 49, and yesterday Marios Aristotelous, 44, both succumbed to their injuries. The third man remains in a serious condition in hospital.

On Tuesday, President Mustafa Akıncı issued a statement expressing his sadness at the unfolding tragedy in the south and extended his condolences to the Greek Cypriot community.

“I feel extremely sad as I observe the enormous damage being caused by the fires in Troodos, and, unfortunately, that two firefighters have also lost their lives. On behalf of myself and my community, I extend my deepest sympathies to the families and friends of those who have passed away. We share the pain of the Greek Cypriot community.”

The TRNC President’s spokesman Barış Burcu confirmed that President Akıncı had contacted his Greek Cypriot counterpart Nicos Anastasiades on Sunday offering help. Turkey’s Minister of Forestry and Water Veysel Eroğlu also announced teams in Mersin and Antalya were on standby, ready to send water and aircraft to assist the fire fighting effort, a message Akıncı passed on given the lack of direct diplomatic contact between Ankara and South Nicosia.

The Greek Cypriot President expressed his gratitude to the Turkish side, but initially chose not to take up the offer, stating he will ‘re-evaluate the situation as it develops’. The South is receiving emergency assistance from Israel, Greece, Italy and Britain, and has also called on France and Russia for help.

Given the urgency of the situation and the close proximity of the Turks, the rejection was met with dismay in the North. It seemed Greek Cypriot political sensitivities had overridden chronic disaster relief, a situation made more bizarre considering the two leaders are trying to unite the island and co-operating under such conditions could only bring the two communities closer together.

Tonight it seems Anastasiades has had a change of heart. According to the Cyprus News Agency (CNA), the Greek Cypriot authorities have given the green light for three air craft from Turkey to take part in the international team tackling the fire.