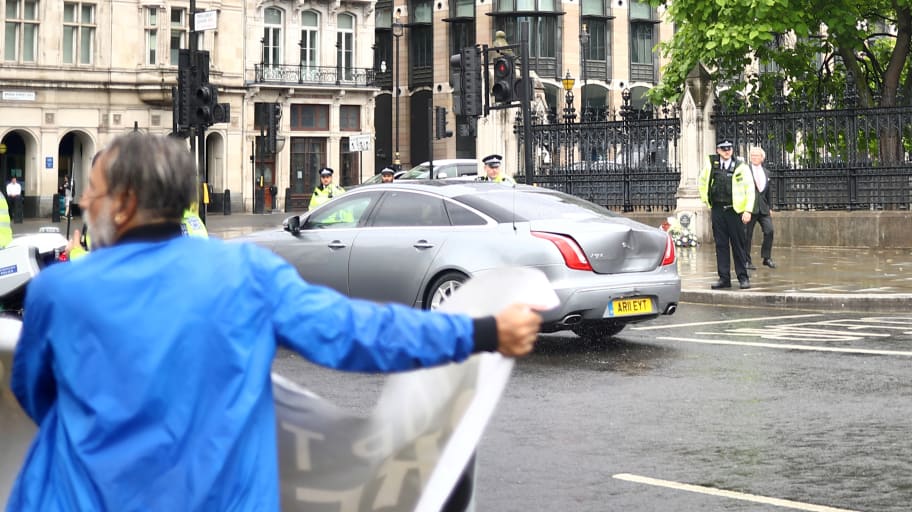 British Prime Minister Boris Johnson has been involved in a minor car crash this afternoon after a protestor ran in front of a vehicle he was in, just as his convoy was pulling out of the gates of Parliament.

The Prime Minister was heading back to Downing Street after taking questions in Parliament.

A middle aged man, who was involved in a small Kurdish protest against Turkey opposite the gates at the time, can be seen running into the middle of the road towards the convoy, forcing the driver of the Prime Minister’s blue Jaguar to perform an emergency stop to avoid hitting him.

A black Range Rover immediately behind then crashed into the Prime Minister’s car, leaving a large dent in the back, which was visible as the cars drove off.

It is believed no one was injured in the incident.

Bois Johnson in car crash at Parliament. Just now. Security drives into back of his car as Kurdish protester runs into road. pic.twitter.com/k1kCplzyZ5

Police immediately apprehended the protestor. The man, who was still chanting against Turkey and its President Recep Tayyip Erdoğan after his arrest, was described on social media as protesting Turkey for “invading South Kurdistan” – northern Iraq.

On Monday, Turkey launched a new anti-terror offensive dubbed Operation Claw-Eagle, carrying out aerial bombing of the Qandil Mountains in northern Iraq, targeting the cave hideouts of PKK terrorists. The PKK have recently stepped up their attacks against Turkish targets.

This is the protester being held just inside Parliament grounds. pic.twitter.com/bogkpWxCSV

The PKK is a proscribed Kurdish terror group, banned in Britain, the USA, and the EU. It has been waging a bloody war against Turkey for over 30 years in an effort to force the state to give Kurds in its eastern territory independence. The conflict has claimed the lives of an estimated 40,000 people, including civilians.

Many Turkish Kurds are vehemently against the PKK. Last September, mothers in Diyarbakır started a daily sit-in outside the regional office of the Peoples’ Democratic Party (HDP), which is accused by the Turkish government of having links to the terror group.
Embed from Getty Images

The mothers demand the PKK return their children, who they claim were recruited and taken to the mountains to be trained to fight.

Fellow Turkish Kurds, including bereaved families whose relatives were killed by the PKK, and army veterans, have lent their support to the peaceful protest.

The report also unveiled that nearly 40% of children recruited by the YPG/PKK were girls – 20 of them under 15 years of age.