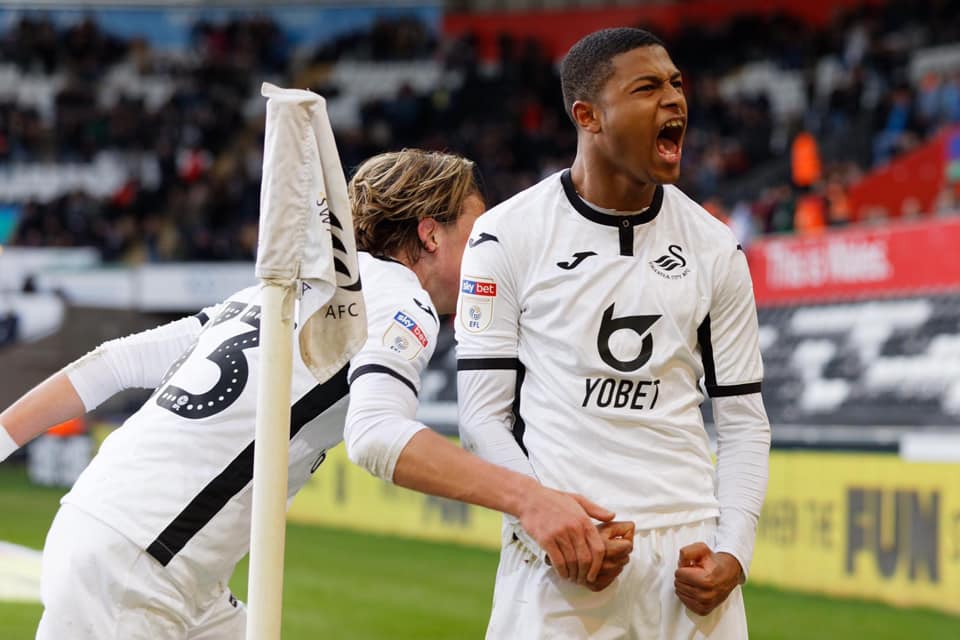 The Liverpool player, on loan to Swansea until the end of the season, levelled the scores on 19 minutes with a first time shot into the bottom right-hand corner.

The Welsh side, which had gone behind to a goal from Wigan’s Nathan Bryne three minutes earlier, went on to win the game at the Liberty Stadium after a cheeky backheel from Andre Ayew in the 67th  minute. The result meant Swansea rise back into the promotion play-off zone.

It was the young striker’s first ever goal in senior football. After the game, an ecstatic Brewster said:

“What a great time to get [my first goal]. It was great to get a goal, hopefully it’s the first of many. I really enjoyed it.”

Fellow loanee Chelsea’s Conor Gallagher set up Brewster, who collected a pass into the area with an angled run. Beating the back four, Brewster then swept a low shot across the goalkeeper and into the bottom corner.

Signed by Liverpool in 2014 when he was just 13, Brewster has already helped the England U17 team win the FIFA World Cup in India in 2017, where he also won the Golden Boot as the tournament’s top scorer with eight goals.

Liverpool manager Jurgen Klopp on why he agreed to Swansea loan

A Londoner of Turkish Cypriot heritage, Brewster was keen to get more professional playing time, but with Liverpool stars such as Mohamed Salah, Sadio Mane, Roberto Firmino and Divock Origi ahead of him in the pecking order, the teenager has been restricted to just three appearances with the first team.

Liverpool manager Jurgen Klopp agreed to Brewster’s loan to Swansea, with the youngster making his debut for them in a goalless draw against big Welsh rivals Cardiff City last weekend.

At a press conference, Klopp explained why he agreed to the six-month deal, which sees Brewster reunited with Steve Cooper, who coaxed the best out of him while managing England Under-17s.

“Because that’s important as well, the boys need to find a manager in the best possible way who knows them already – that’s the case with Steve and Rhian, so that helped a lot.

“Swansea and Steve Cooper asked already in the summer if he can go and it was not the right moment. He came out of a long-term injury, so I thought he needed to just get a rhythm, get used to his body again, but he needed to get used to the intensity.

“Now he’s already training for a long, long period, so it was a good moment to give him on loan and to help Swansea hopefully, and Swansea can help Rhian and then us. That was good.”

After his performance on Saturday, Rhian Brewster’s mum Hulya Hassan, who was at the game, wrote on Facebook, “Alhamdulilah Goz hasetten  Allah korusun inshallah 🙏🏾[Praise be to God. God bless and protect you from envious eyes]. Making His Mumzy & Sister Very Proud 😍”