Turkish Cypriot leader Küçük to be ‘immortalised’ on souvenir banknote

Dr Fazıl Küçük, who led the Turkish Cypriot people’s struggle for existence in the mid-20th century, will be featured on a special “euro” banknote, it has been announced.

The face of the late leader will appear on a limited edition souvenir banknote printed by a company in Turkey, which recently produced notes featuring Mustafa Kemal Atatürk to mark the 100th anniversary of the start the Turkish War of Independence.

Around 10,000 of the “zero euro” banknotes are to be produced, a statement from the Dr Fazıl Küçük Foundation said, and will go on sale to collectors in the Turkish Republic of Northern Cyprus (TRNC).

The move aims to “pay tribute to Dr Küçük for his great sacrifices and leadership to the Turkish Cypriot people”, the statement said.

The initiative was revealed following a meeting between Dr Küçük’s son Mehmet and Numisat Özgür Honça, who was “authorised three years ago to print souvenir money in Turkey”, reports said.

The European Central Bank (ECB) does not print souvenir notes itself, but says that producers “must comply with the ECB reproduction rules to ensure that the banknotes cannot be mistaken as genuine”.

Limited edition souvenir banknotes, like this zero Euro marking the centenary of the start of Turkey’s War of Independence, have proven very popular 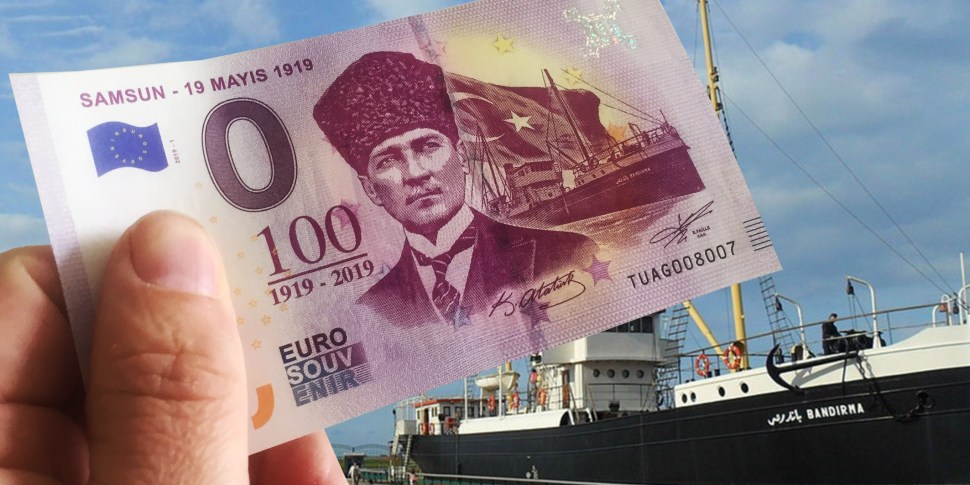 It has previously stressed in a tweet that it “does not regulate or approve souvenir banknotes”.

Dr Küçük was born 1906 in Lefkoşa. He studied medicine in Istanbul and continued his training in France and Switzerland before returning to Cyprus in 1937.

His interest in politics lead him to establish the daily newspaper Halkın Sesi (The People’s Voice) in the 1940s, which continues to be published today, writing against British colonial rule. He also fought against Enosis, union of Cyprus with Greece.

Dr Küçük became the first Vice President of the Republic of Cyprus when it was formed in 1960. He died on 15 January, 1984 in a London hospital following a period of ill health.