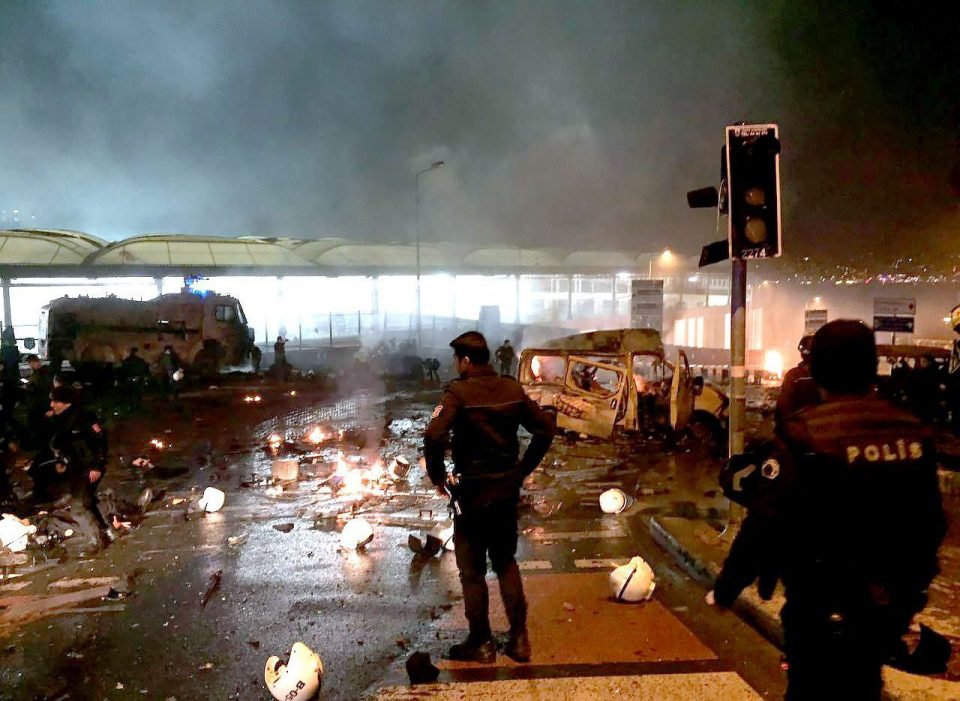 According to Turkey’s Interior Minister Süleyman Soylu, 30 police officers and seven civilians are among the dead, with another of the victims yet to be identified. A further 136 were wounded, with 14 of them in intensive care.

Twelve suspects have been detained in connection to the attack on Dec. 10. Giving information to the press at a conference earlier today, Deputy Prime Minister Numan Kurtulmuş said the first explosion came from a moving car that targeted riot police near the stadium.

The second attack came 45 seconds after the first when a suicide bomber detonated explosives at Maçka Park just across from the stadium.

The blasts took place around 10:20 p.m., about 90 minutes after the match between Beşiktaş and Bursaspor had ended. The huge explosions were heard on both sides of the Bosphorus.

Photos and videos taken at the scene showed the road outside the stadium strewn with police helmets and burnt out vehicles.

Beşiktaş announced one of the civilians killed was a staff member at the Beşiktaş store. The football club and Bursaspor led the condemnations against the cowardly attack, with similar messages issued by the Turkish Football Federation (TFF), Fenerbahçe, Galatasaray and Trabzonspor, as well as Turkey’s political parties and civil society groups.

A day of mourning across Turkey

Prime Minister Binali Yıldırım issued a statement saying that “this vile terrorist attack”, adding that the attack will not succeed in breaking the unity of the nation. He also announced a day of national mourning across Turkey, asking all to lower flags to half-mast.

Suspicion has fallen on the PKK, which has conducted similar terror attacks in Ankara and Istanbul over the past few years. Fundamentalists supporting Daesh, which has been behind other heinous suicide bombings in Turkey, also remain prime suspects.

Officials from the USA, UK, EU and NATA also condemned the attack, with many taking to social media to show their solidarity. The UK Foreign Secretary Boris Johnson, who was in Turkey in September, tweeted “Condemn attack in #Istanbul. My thoughts are with all those affected. UK committed to working with #Turkey to tackle terrorism”.

Turkey’s involvement in the Syrian conflict and the government’s withdrawal from the Kurdish Peace Process has triggered the worst terrorism in the country for over a decade. Over the past year, Turkey has been hit by 17 bomb attacks that have killed 372 people and injured 1,837.

Five of the worst terrorist attacks of 2016 are: