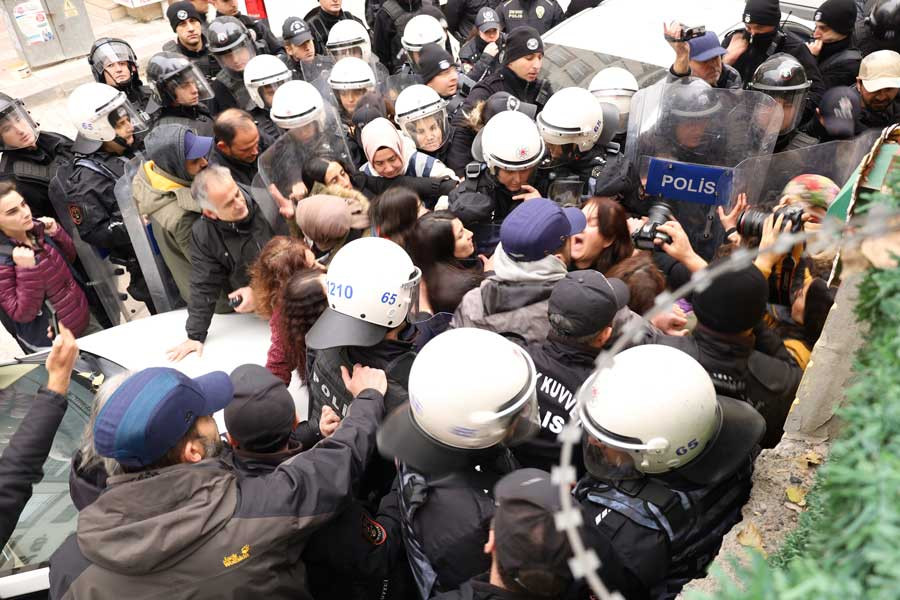 Thousands of women across Turkiye took part in the annual International Day for the Elimination of Violence Against Women and Girls on Friday, 25 November. Yet for some, their attempts at peaceful protest were met with a heavy-handed and violent response from police in several districts.

In Istanbul, despite it being a tradition to assemble along İstiklal Caddesi, the city’s governor again opted to ban the protest. Roads leading on to the popular, pedestrianised shopping street had barriers erected and nearby metro stations were closed to stop access.

Women’s groups called on protestors to flout the ban and assemble peacefully by Taksim Tünel, near the base of İstiklal Caddesi. They were met by riot police, who kettled the women in. A few broke free of the barricades, but were then charged at by police, according to local media reports, resulting in dozens of protestors injured and detained.

Journalists were also prevented from covering the events, with some 20 journalists kettled in along with protestors.

“We are not allowed to leave the blockade (of the police),” journalist Sultan Eylem Keleş tweeted.

Those trying to get to Taksim Tünel from the Asian side of the city were also blocked by police at Kadıköy. Those arrested were later released.

There were problems for some of the detained women in Istanbul, however, who were initially denied access to their lawyers.

“Our detainees are deprived of their right to see their lawyers (in Istanbul)!” a prominent women’s platform announced.

There were arrests in Ankara too, where protestors had gathered on Sakarya Avenue. Five women were detained after trying to enter the protest area with their banner.

Women protestors in a multitude of other areas, including Bursa, Diyarbakır Mardin, and Van, also faced police blocks and governor bans, as the authorities tried to prevent them from assembling and marching.

There was more tolerance by the authorities in Eskişehir where women were able to hold their protest without interference. The women demanded an end to violence, abuse, discrimination, and injustice.

Hundreds of women also gathered in Izmir, where an array of banners were on show, including ones bearing the popular Kurdish phrase “Jin, Jiyan, Azadi” (‘Women, Life, Freedom’), popularised following the death of a young Iranian Kurdish woman, Mahsa Amini, in police custody in Iran.

Many mothers of murdered women also attended Friday’s protests, their words powerfully conveying the vulnerability of women, not only at the hands of violent men, but at the justice system which fails to bring justice to so many families after their loved ones are murdered.

Among those to speak out were Filiz Demiral, whose daughter Ceyda Yüksel was killed and Eda Küçükbaltacılar’s mother Nurhayat Küçükbaltacıla, who spoke out at the attempt to stop their protests:

“We will multiply even more. You take three people into custody, we become six. You take fifteen, we become a thousand.”

Filiz Demirel also underlined the need for justice: “They are trying to intimidate us, but we will never be silent. I want justice for my daughter and all the women who were killed. You will never close the platform either. They are the only ones behind us!”

Violence against women have reached epidemic levels. According to Anıt Sayaç, a digital database recording femicides, 418 women were murdered by men in 2021. The figure for this year currently stands at 354.

Despite widespread violence and femicides in Turkiye, last year the Turkish government opted to formally withdraw from the 2011 Istanbul Convention – an important international agreement by the Council of Europe, designed to combat violence against women and domestic violence.

Main photo, top, of Turkish women clashing with police on International Day for the Elimination of Violence Against Women and Girls on Friday, 25 November 2022. Photo via Twitter/Ekmek ve Gul.