Women’s Day in Turkiye: The women of Istanbul will not be silenced or stopped! 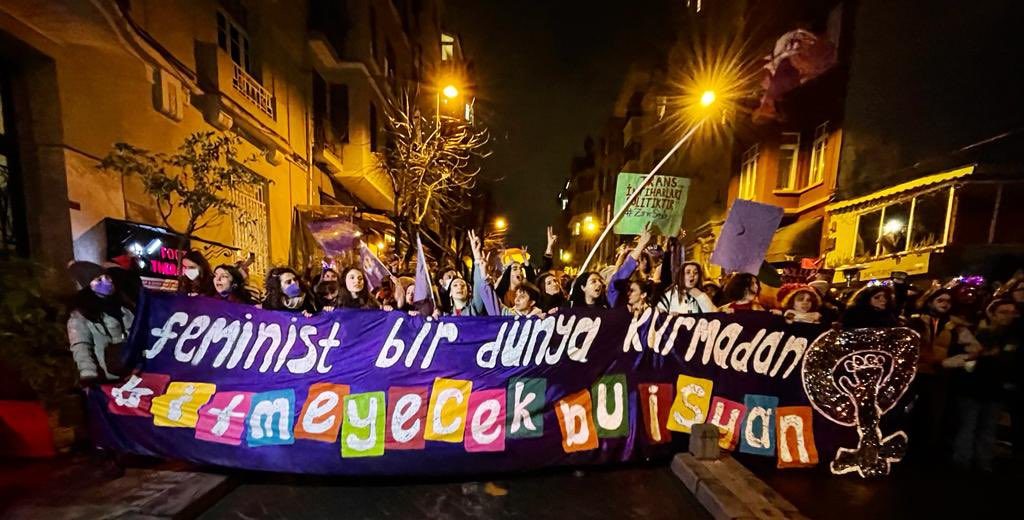 Marked on 8 March every year, the International Women’s Day (IWD) is a global event to celebrate women’s achievements and also to demand women’s equality. In Istanbul there was again an air of defiance among the metropolis’ women.

Each year, in Turkiye as in other parts of the world, many notable events take place on IWD, but along with this is an awful lot of purple-washing. This is when governments, companies and organisations pay a cursory nod to the essence of Women’s Day without doing anything of substance for the rest of the year to make good on their words.

First up, women don’t want flowers or empty words on this day: their struggle for equality is real, and it is lifelong. It is often overlooked how the IWD was founded in 1911, in honour of migrant women’s unionised struggles against terrible working conditions.

On 25 March 1911, a fire broke out in New York City’s Triangle Garment Factory killing 146 garment workers. Of the victims, 123 were women of mostly Italian and Jewish immigrants who were trapped on the top floors with no means of escape.

Over a century later, the fight to secure proper safe working conditions for female workers still continues all around the world, including Turkiye where even the Women’s Day march is banned.

Since 2003, women organisations have been organising a night march along one of Istanbul’s most famous avenues, 1.4 kilometre-long İstiklal Caddesi, on 8 March. A few years after its launch, the event became named the “Feminist Night March”.

Under the ruling Justice and Development Party (AKP), this peaceful annual march has repeatedly failed to get permission from officials to take place over the years.

Again this year – the twentieth anniversary of the very first İstiklal Caddesi march – the Istanbul Governor’s Office put obstacles in the path of the protestors by declaring Taksim Square at the top end of İstiklal Caddesi and surrounding areas to be off-limits for demonstrations. The march, sit-down protests, stands, and all other forms of protest were banned. As a result, riot police set up barricades in the square.

Yet these bans did not deter the women of Istanbul. They were not going to be silenced or stopped!

Thousands of women instead met in the neighbouring district of Cihangir and the march went ahead despite all the restrictions. As in previous years, the event was marred by the use of tear gas by the police as well as arrests as women tried to move beyond police barricades.

“Tens of thousands of women are here together, in the shadow of poverty and war caused by men again. This rebellion won’t be over until we have a feminist world” cried spokespeople at the march.

A press statement they read out said: “The feminist rebellion will not end without first establishing an equal and free world where there is no patriarchy, capitalism, racism, war, occupation, religious oppression and labour exploitation!”

According to a report prepared by the Republican People’s Party (CHP) MP Candan Yüceer, at least 278 women have been murdered and a further 235 women have died in suspicious circumstances in Turkiye since the country’s withdrawal from the Istanbul Convention with a presidential decree last March.

Yüceer also reported that over 7,990 women have been killed since the AKP came to power in 2002.

In an interview with Evrensel newspaper, Yüceer said that Turkiye has the biggest gender-based violence among all 38 OECD countries. She also noted that, “The number of protection requests [by women at risk of violence in Turkiye] increased by 114% from 139,000 in 2012, to 339,792 in 2020”.

“In a country where a woman is killed every day, the capacity of women refuges is just 3,624,” Yüceer continued. She also underlined the financial violence against women in Turkiye, from the large gender pay gap to high poverty rates, unemployment and bad working conditions.

In 2020, a study by the Independent Labour Organisation’s Turkiye Office and TURKSTAT revealed that the gender pay gap stands at 15.6% in Turkiye. The wage gap widens as age increases and educational level decreases.

Poverty is also growing in Turkiye. In 2020, the World Bank found 12.2% of the Turkish population was found to below the poverty line, with women among those worst affected.

“While the recovery in late 2020 has helped labour markets recover somewhat, many have been left behind, especially women, youth and lower-skilled workers,” the World Bank said in its Turkey Economic Monitor report.

The number of Turks, and women in particular, living in poverty will have grown even further in 2021 and into 2022 following the massive depreciation of the Turkish lira and hyperinflation in the country.

Last year, economist Dr. Ayşe Aylin Bayar revealed the impact of coronavirus on Turkiye’s financially vulnerable in her study titled “The COVID-19 Pandemic and Poverty”. Dr Bayer found a 9.1% increase in poverty among women in Turkiye, with single mothers in particular suffering from the effects of poverty.

In an interview with the Bianet news portal last spring, Dr Bayar said the poverty threshold in Turkey is a monthly income of TL 7,983 ($950), and 10.5 million people live below this line.

She outlined how poverty affects men and women in different ways: “Only 15% of poor women are able to work,” Dr Bayar noted. “Most poor women perform unpaid labour in their homes and many are illiterate, which puts them in a very vulnerable position.”

Last month, the AKP government’s proposal to restrict the duration of alimony was criticised by lawyers. They said the proposal would prevent women from seeking divorce and would force them to stay in abusive relationships in a country where there are already high poverty rates among women.