2022 and the Year of Shusha: restoring the “crown of Karabakh” to its former glory

Following the liberation of Azerbaijan lands from thirty years of occupation, the reconstruction of the Karabakh region has begun in earnest.

One area that is undergoing major building work is the internationally renowned city of Shusha (or Şuşa in Azerbaijani and Turkish). Previously the cultural centre of Azerbaijan, it is now being restored to its former glory.

Many other fantastic cultural events are set to take place in the city this year after the President of the Republic of Azerbaijan Ilham Aliyev declared 2022 as the Year of Shusha.

This declaration led to the development of a comprehensive “Action Plan for the Year of Shusha” by the Azerbaijani government, which was formally approved by the Cabinet of Ministers on 25 February 2022.

Today, the liberated territories of Azerbaijan are in the global spotlight for all the right reasons. As international travel normalises following the easing of coronavirus pandemic restrictions, we see a lot of people wanting to visit these territories. These tourists will help us to spread the word about the amazing sights and experiences of Shusha, helping it to become a world-famous city.

That Shusha is called the “Cultural Capital of Azerbaijan” is not accidental. It is a justified label because the city has given us multiple outstanding personalities and contributors to Azerbaijani history and culture.

The city of Shusha was invaded and occupied by Armenia in 1992, and it remained under foreign control for a long time. Sadly, like other parts of the Karabakh region, many of the historical monuments associated with Azerbaijain in this city were destroyed during the occupation.

Located in the Southwest of Azerbaijan, Shusha is the second largest city in the Karabakh region. When it was finally liberated on November 8, 2020, it became a defining moment in 44-day war with Armenia, breaking the resistance of the occupiers, who understood defeat was imminent.

Two days later, on 10 November 2020, the Second Nagorno-Karabakh War formally came to an end when a ceasefire agreement was signed by President Aliyev, the Prime Minister of Armenia Nikol Pashinyan, and the President of Russia Vladimir Putin, ending all hostilities in the region. 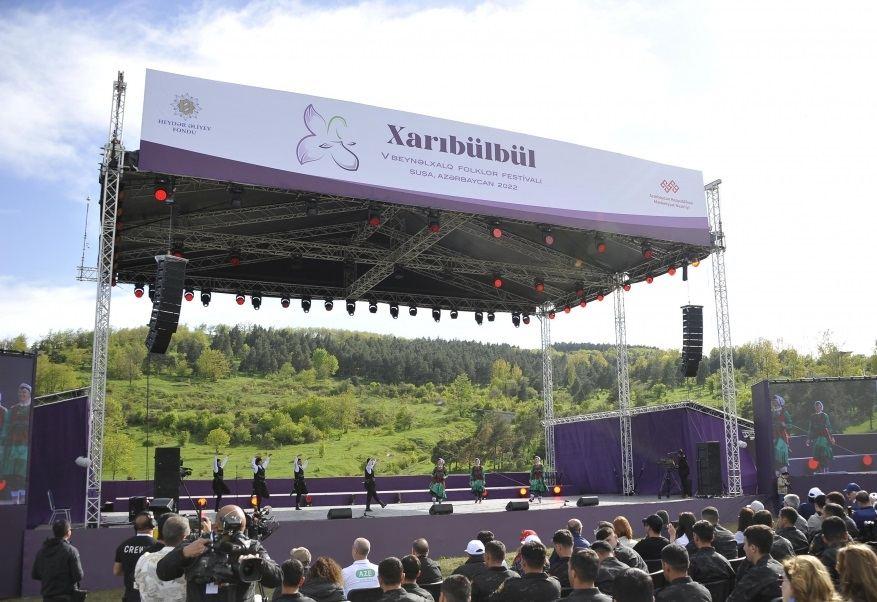 In an address to the nation on the occasion of the liberation of Shusha on 8 November 2020, President Aliyev pledged that the “crown of Karabakh” will soon be revived and restored to its former glory.

For Azerbaijan, Shusha is a symbol of the freedom of Karabakh from occupation. It also represents peace and security to the tens of thousands of people who were displaced.

Shusha is the cradle of our culture. In this respect, President Aliyev’s announcement that 2022 is the Year of Shusha has a special meaning, which will deepen with every event it hosts.

The Kharibulbul International Music and Folklore Festival in Shusha is of historical significance. The event, which had taken place annually until the occupation of the city, is named after the Khari Bulbul flower, which only grows in Shusha. The shape of the Khari Bulbul is likened to a nightingale, or bulbul in Azerbaijani and Turkish, earning the flower its name.

This year’s festival programme included both folk and classical music performed by diverse local and international artists. The Azerbaijan State Song and Dance Ensemble opened the four-day festival with a concert on 12 May. Locally revered artists Ilkin Ahmadov, Babak Niftaliyev and Sabina Arabli performed “Karabakh Shikastasi”, the sounds reverberating through the Shusha mountains.

Shusha recently hosted a meeting dedicated to the 30th anniversary of the Azerbaijan-UN partnership. It brought together international actors, underlining the world’s acceptance of and joint efforts with Azerbaijan to address the realities of the post-conflict period in the region.

Earlier this month, the Global Baku Forum at the Nizami Ganjavi International Center saw 400 guests arrive from 50 countries in the capital city. Cultural heritage was a major theme, with delegates visiting the liberated district of Fuzuli and the city of Shusha.

This prestigious international event was followed by a nationally significant one organised by ADA University: Karabakh in the Future. The event, which held as part of the ADA University Alumni Forum 2022 that ran from 18 to 19 June, was attended by 200 graduates and guests. There were multiple panel discussions on topics such as, “Sustainable Future in Business Opportunities, Agriculture, Energy Resources and Tourism of Karabakh”.

In May of this year, ADA University partnered with the Center of Analysis of International Relations (AIR Center) to host an international forum in Shusha titled “South Caucasus: Development and Cooperation”.

This series of cultural, political and academic events that involve Susha are creating a new vibrancy that builds on this city’s incredible heritage.

The city’s owners have returned and are committed to turning Shusha into one of the most beautiful touristic centres in the world. That vision is bearing fruit as ever more foreign politicians, scientists, renowned experts and journalists visit this ancient city of Azerbaijan to discover its many wonders.

We invite our friends and colleagues living and working abroad to make the trip to Shusha and experience this majestic cultural capital for themselves.

This article was co-authored by Ali Zulfugaroglu, journalist and diaspora expert Elnur Elturk, both from Azerbaijan