How a “miracle” rainstorm, the public and international actors came to the rescue for North Cyprus’ worst wildfire 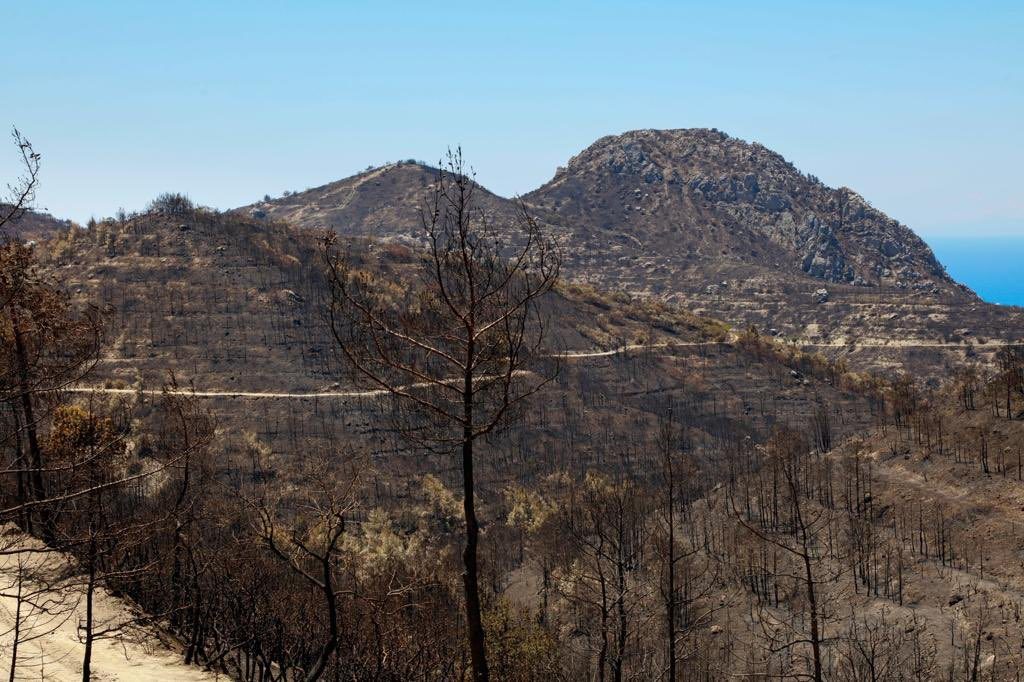 Last week, the Turkish Republic of North Cyprus (TRNC) experienced its most catastrophic forest fire since the Beşparmak Mountains wildfire of June 1995.

Twenty seven years on, a disastrous fire broke out in the forested area between the Tatlısu and Ağıllar villages, located in the Gazimağusa district of Northern Cyprus, on 21 June. The weather helped create an extreme intensity, with the fire reaching the mountain forests of the Mersinlik village.

Not long after the outbreak of the fire, a video surfaced on social media of an “unregistered” excavator bursting into flames on the lands belonging to Halil Kartal, which ignited the devastating four-day-long wildfire. Tatlısu police later disclosed that Kartal has an unauthorised forest house on the property.

Partly through the high winds and partly due to uncleared dry vegetation, the wildfire quickly spread to multiple villages, including Ardahan, Altınova, Ağıllar, Çınarlı, Mersinlik, Tatlısu, and Topçuköy in  Gazimağusa district.

Fortunately, the dedicated efforts of Turkish Cypriot firefighters and teams of volunteers prevented the flames from entering Kantara.

International actors come to the rescue

Even though Turkish Cypriots were already aware, this disaster underlined the TRNC’s vulnerability to such events. The fire again exposed the unpreparedness and incompetence of the TRNC authorities in responding to emergency situations, which still lack firefighting aircrafts of their own.

Instead of planning and cooperation, the TRNC has lazily depended on help from Türkiye to fight seasonal wildfires. But on this occasion, the mainland had its own fire disasters to contend with in Marmaris, restricting the aerial firefighting support it could give.

Forced to swallow their nationalist pride, President Ersin Tatar and the UBP-DP-YDP coalition government reached out to international actors. The TRNC Presidency contacted the UN Peacekeeping Force in Cyprus, while the TRNC Ministry of Foreign Affairs issued an appeal for help. Their cries were answered by the Greek Cypriot authorities, the British bases in Cyprus and Israel.

Initially, the British Sovereign Base Area provided 2 helicopters. However, as the wildfire hit an uncontrollable magnitude, the TRNC officials accepted an offer for help from their South Cyprus neighbours, with the Greek Cypriot Forestry Department of the Ministry of Agriculture of Cyprus providing swift firefighting aid.

With Greek Cypriot leader Nicos Anastasiades’ blessing, two firefighting aircrafts and one helicopter were dispatched to Northern Cyprus on 22 June.

“The President’s special representative took up the issue with UN Cyprus Chief of Mission Colin Stewart and requested firefighting aircraft and helicopter support from the Greek Cypriot side to overcome the fires,” said a statement from the TRNC Presidency, which thanked the different international actors for their important assistance.

The source of the devastating wildfire in North Cyprus, according to local media

In an interview with Greek Cypriot newspaper Politis, President Anastasiades said, “We have always done this [offered], because Cyprus is the homeland of us all. In the past, before we ran to help, we were asked to remove the insignia of the Republic of Cyprus from our planes, which of course was unacceptable.”

“This time, no such thing was asked. In addition, we requested assistance from Israel, which responded immediately and also sent two aircraft. In fact, the President of Israel, Mr. Herzog, called me while I was at the EU summit to see if we needed anything more. I thanked him warmly,” he stated.

“It illustrates a fundamental point about this island, and that is the solidarity among Cypriots,” UN Chief Stewart said, adding, “When the time came, there was unhesitating and unquestioned assistance from Greek Cypriots for Turkish Cypriots who were in this difficult situation, and I think this is a very positive thing.”

This time last year, during the dreadful Limassol forest fire in South Cyprus, Anastasiades refused help from the TRNC, while the Turkish Cypriot authorities declined Greek Cypriot help over a major oil from Syria, which threatened the Karpaz coastline. So, can this be called a progress in having more cordial relations outside of politics? Only time will tell.

“With the urgent necessity for support the Greek side enabled us to preserve our natural inheritance, our wish is for co-operation to be mutual and not exploited for political purposes”, said the TRNC Presidency statement published on Friday, 24 June.

According to that statement, aerial support requested from Israel was initiated by the TRNC through the UN and British High Commissioner Stephen Lillie. On June 23, Israel sent two firefighting aircrafts to North Cyprus via Larnaca.

Perhaps one of the most inspiring and notable parts of this disaster was the sight of ordinary Turkish Cypriots tirelessly working together to save their homeland and forests.

Just when hope seemed to be ebbing, however, and the fires were resuming on the night of 24 June, with fears winds from a storm could fan the fire all over the yet unburnt forests, a miracle happened. A rainstorm that is not even experienced during winter seasons in Cyprus suddenly appeared and quenched the flames, prompting the whole island to rejoice.

As the investigation into the source of the wildfire progresses, police and experts are currently reviewing film footage, including the one of the unregistered excavator belonging to Halil Kartal.

Some people are claiming that the fires were as a result of arson, pointing to how the flames erupted in multiple unconnected parts of North Cyprus.

The majority of Turkish Cypriots are insisting that the investigation should not only look at how the fire broke out, but also address the incompetence of the TRNC government. The public outrage at the spread of the fire due to the authorities’ unpreparedness means learnings and urgent improvements are a vital outcome from this disaster.

At a time when the TRNC President is working with Türkiye’s President Erdoğan to build a new TRNC Presidential complex, the message from Turkish Cypriots could not be clearer: get your priorities right and use any available money for the purchase of essential resources such as firefighting aircraft.