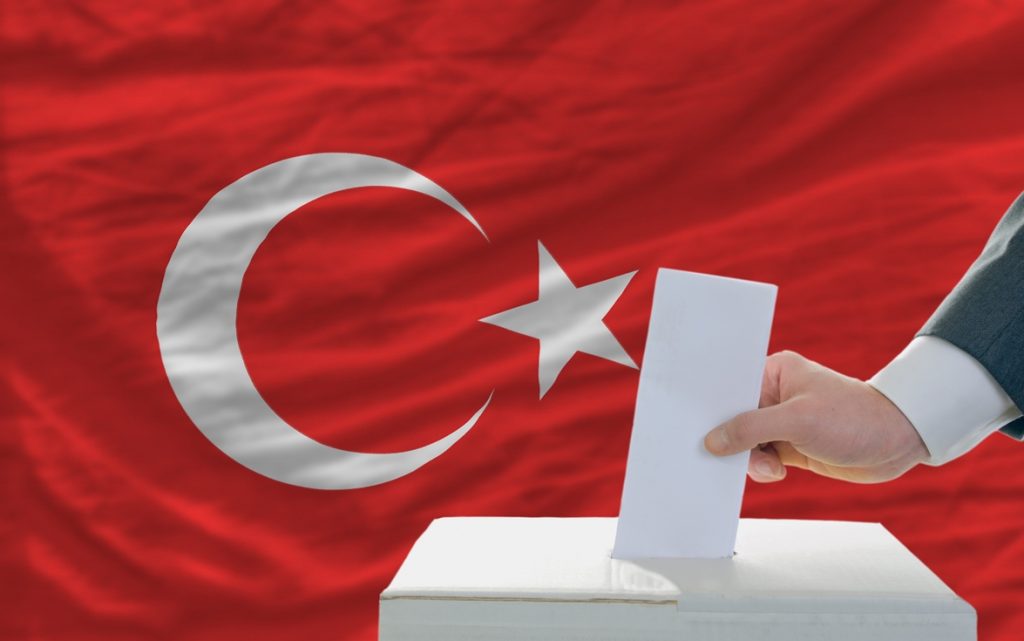 Turkey witnessed its first joint presidential and parliamentary elections a little over a week ago, marking a significant change in the country’s political history. The 24 June snap vote had a turnout of around 87% and ushered in a new system of government, bringing reforms to the Turkish constitution –narrowly approved in a controversial referendum in April 2017 – into effect early, over a year ahead of their intended implementation time of November 2019. Six presidential candidates threw their hats into the ring, while eleven parties joined the parliamentary race.

Who stood? How did they perform?

The main candidates from highest vote share to lowest were incumbent President Recep Tayyip Erdoğan the unity candidate of his own governing conservative Justice and Development Party (AKP) and its allies the hard-right opposition Nationalist Action Party (MHP) and Great Unity Party (BBP) who won outright with 52.59% of the ballots in the first round. In second place was the main opposition secularist centre left Republican People’s Party (CHP) candidate and former physics teacher Muharrem İnce who picked up 30.64% while Selahattin Demirtaş of the left-wing Kurdish-focused Peoples’ Democratic Party (HDP) came in third at 8.4% despite having been imprisoned throughout the campaign.

In fourth, fifth and sixth respectively were Meral Akşener of the newly founded nationalist Good or İyi Party at 7.29%, the Manchester-educated former mayor of Sivas, Temel Karamollaoğlu of the religiously conservative Saadet or Felicity Party with 0.89% and fringe candidate Doğu Perinçek of the Maoist and ultranationalist Patriotic Party at 0.2%.

İyi Party leader Meral Akşener failed to win over the public at the presidential polls, coming 4th with just 7.29% of the vote

The parliamentary results followed a similar trend. The AKP emerged as the largest party with just over 42% of the votes and 295 out of 600 seats in Turkey’s Grand National Assembly losing its majority, while its main partner the MHP took around 11% and 48 MPs.

The CHP, İyi Party and Saadet who formed the “National Alliance” to compete with the AKP, MHP and BBP’s “Republican Alliance” took around 34% at the polls, with the CHP gaining more than 22% of the vote and 147 seats, the İyi Party gaining 44 MPs with around 10% and Saadet gaining no MPs with over 1.3%.

The HDP also gained 67 seats after successfully crossing the electoral 10% threshold to be awarded parliamentary seats as a standalone party, with more than 11% of ballots cast. The result comes despite restrictions on the party’s ability to campaign, with presidential candidate Demirtaş appearing on state TV broadcaster TRT from his Edirne prison cell for just 10 minutes and calling on voters to prevent what he called Erdoğan’s “one-man regime” claiming that Turkey’s present condition is just a “teaser” and that “the actual scary part of the movie has not yet begun.” Demirtaş was jailed in November 2016 on suspicion of links to the prescribed Kurdistan Workers’ Party (PKK), which has waged a decades-long war with the Turkish state and is recognised by Turkey, the EU and US as a terrorist organisation.

Both the AKP and CHP made alliances with smaller parties to meet their electoral aims, making notable achievements. President Erdoğan successfully tipped the balance of the presidential vote in his favour by automatically gaining the ballots of the MHP and BBP who opted not to field candidates of their own.

The opposition CHP and their National Alliance partners on the other hand, put forward as many candidates as possible, hoping to appeal to a broad coalition of voters across Turkish society in an attempt to prevent Erdoğan from gaining over 50% in the first round, and then rally around the most successful opposition candidate for the presidency in the second round of voting.

While the opposition alliance failed to realise this plan, the joint campaigning yielded other significant successes for the CHP and Saadet Party. The CHP gained pious votes cast for Saadet which would have otherwise been wasted had the two parties not been allied because of Saadet’s inability to pass the threshold. These recycled votes allowed the CHP to gain seats in more conservative parts of East, South East, and Central Anatolia that the party had not won in for decades, such as Kars, Yozgat and Elazığ.

Despite not directly entering the parliament, Saadet which has never gained an MP since its foundation in 2001 may yet gain its first deputies. Saadet members Cihangir İslam and Abdulkadir Karaduman were able to use their alliance with the CHP to transfer onto their partner’s candidate list and win seats for Istanbul and Konya respectively as CHP MPs, in this position they are able to re-join their party and remain in parliament.

Muharrem İnce assembled huge crowds at his rallies, ending with an estimated 5 million in Istanbul

The CHP candidate Muharrem İnce’s widespread campaign held over 100 rallies in 65 of Turkey’s 85 cities over 45 days on the trail – its final Istanbul one had an estimated 5 million attendees. The dynamism of his campaign did not go unnoticed, and rumours have surfaced from within his party that he is being considered a potential leadership challenger to current CHP head Kemal Kılıçdaroğlu. Even pro-government journalists took note, with Daily Sabah’s Washington correspondent Ragıp Soylu tweeting “Turkish main opposition’s candidate Muharrem Ince drew large crowds in Istanbul’s Maltepe. We aren’t used to [seeing] opposition being able to convene many people in their rallies.”

Erdoğan a dismal third in the UK Presidential vote

İnce’s personal appeal also reached other constituencies abroad. Surprisingly, he took 51.9% of the ballots cast by Turkish citizens voting in Britain, despite his own party’s gaining only 24.5%.

Over 49% of those voting in the UK, a significant portion of which are left-leaning and of Kurdish heritage, backed the HDP in the parliamentary election, while less than 24% of UK voters favoured that party’s presidential candidate Selahattin Demirtaş. It meant İnce was able to gain support from voters who have traditionally felt alienated by the CHP’s Turkish nationalist sentiments.

Erdoğan came a dismal third in the UK, winning just 21.5% of the vote, a performance matched by the AKP, which secured just 18.5% of votes in Britain. Turnout in the UK was 42.6%.

However, the Turkish President performed strongly elsewhere in the diaspora, winning over 65% Turkish voters in Germany, gaining a higher proportion of votes than he received in Turkey. Another notable result for the AKP was that the party brought forward the youngest MP ever to be elected in the history of the Turkish Republic the 22 year-old Rümeysa Kadak who recently graduated from Istanbul Marmara University.

This is the most crowded Turkish elections I voted in London.. Last election turnout was less than 40% of voters in UK, if my memory does not fail me.. Definitely set to be higher this time.. And great to see so many busses and vans bringing voters.. pic.twitter.com/E3lqwNoUXO

AKP’s main partner the MHP also performed well considering the low expectations surrounding the party as it went into the election. Observers believed the party would suffer as a result of the split between supporters of leader Devlet Bahçeli, who has been at his party’s helm since 1997 and his detractors who opposed his joining forces Erdoğan and the AKP by backing the “Yes” campaign in the April 2017 referendum on changes to the constitution.  His opponents, led by Meral Akşener splintered away from the MHP, founding the İyi Party in October 2017 as an alternative right-wing opposition party. The İyi Party was expected to damage the MHP’s chances of crossing the parliamentary threshold by eating into its vote base, but the MHP was able to retain a comfortable result and gain seats despite having only held three rallies throughout the campaign.

With neither the AKP nor the other opposition parties holding a majority of seats, the MHP’s 48 MPs hold the parliamentary balance and are effectively kingmakers. This could place the party, which was once dismissed as an outdated political dinosaur, in an influential position. Government officials are speculating that the party may be offered a significant ministerial position while a high-profile figure within the party has suggested the party leadership may prefer to have an advisory role. Either way, the party is well placed to influence the direction of future government and opposition policies towards Cyprus, reinstating the death penalty, and the conflict with the PKK and its affiliates domestically and abroad.

Turks have fun while casting their votes

Setting the parties aside, the Turkish electorate also injected some fun into election day with some voters arriving at the polling booths sporting wedding dresses, superhero costumes, traditional clothing and more, while celebrity chef Nusret Gökçe, AKA Salt Bae mimicking his famous salt sprinkling gesture before putting his vote in the ballot box.

9.381km den geldi Bir oy da bir oydur dedi. One vote is important so I have come this morning from far away for presidential election . 🇹🇷#saltbae #salt #saltlife

The election results divided opinion globally with statements from foreign leaders, institutions and citizens alike. Azerbaijani President Ilham Aliyev was the first head of state to call and congratulate Erdoğan on his winning a second term as president, while Hungarian Prime Minister Victor Orban was the first EU leader to do so. Erdoğan’s victory was particularly well received in Pakistan which has close relations with Turkey, with one Pakistani twitter account posting a photo of a lorry featuring a portrait of the Turkish President.

The tone in a statement from the Brussels-based European Parliament-Turkey Forum was decidedly less jubilant about Erdoğan’s result, referring to the election as “unfair”.

“We congratulate those who won seats and welcome the plurality of the new parliament with the Peoples’ Democratic Party (HDP) having managed to surpass the 10% threshold and the introduction of İYİ (Good) Party. However, the ongoing state of emergency and the disproportionate measures resulting from it, have led to an uneven playing field for the opposition parties and candidates competing for the vote resulting in an unfair election. Especially when it comes to the lack of independent media and the silencing of critical journalism” while also praising “Turkish citizens for showing continuous engagement to democracy and transparency by participating massively in the election and protecting the ballot box.”

The forum was also critical of the new system of government adopted by Turkey at the election, and warned the country that this could disqualify itself from joining the EU in future, explaining that “the new presidential system that now enters into force lacks the necessary checks and balances required to safeguard democracy and the rule of law, which are basic conditions for EU membership.”

Five parties are returned to the Turkish Parliament. The statistics below show: Seats won in 2018 (Seat change from Nov 2015 elections) / Popular vote (Percentage)