Are Ankara and the TRNC tearing up sacred Muslim land-rights to seal a deal with the South?

The Islamic Trust of Cyprus – EVKAF – the central Islamic charity operating on the island since 1571, risks losing billions of Turkish Liras in stolen land if the current agreements reached in the Peace Talks are carried out.

The hidden danger should be a concern to all men of faith and principle, not to mention the many thousands who benefit daily from its anti-poverty and other charitable operations, including housing the poor and supporting them with home maintenance costs.

In previous centuries, EVKAF’s function was central to the state: it built and ran public utilities such as the Büyük Han (Big Inn) and many of the vital aqueducts, which underpinned the farming economy, not to mention its mosques, and even churches.

And, as the focus of every pious Muslim’s wish to help the poor when s/he died, it became a huge, charitable landowner, across the whole island. Indeed, its General Manager from 2013, Lefkosa-born Professor Dr Benter, a former Associate Professor at Memphis University and Dean of Kuwait Medical School, reminded a television audience this month that EVKAF currently holds title-deeds to 14% of the entire land-mass in the Greek Cypriot Republic of Cyprus.

This area far outweighs the area of the British Bases, and represents a huge and valuable asset. So why has no single whisper been heard of it during the Talks, nor any elected Turkish Cypriot politician questioned its status? In the rush to reach some sort of agreement, have Ankara and Lefkoşa washed their hands of these claims?

Certainly, every treaty governing Cyprus since 1571 has recognised EVKAF’s land-titles as “inalienable” – that is to say once land has been given to EVKAF, it cannot pass to anyone else – unless compensation is agreed.

Cyprus was acquired by the UK from Turkey in 1878 and became a Crown colony in 1922. Article 60 of the 1923 Treaty of Lausanne states that trusts created under the Ottomans would be maintained under British rule. This guarantee was repeated even in the Independence Treaty of 1960, witnessed by the UK, Greece and Turkey, as Guarantors.

It is known that Prof. Benter discussed EVKAF’s claims with President Akıncı and Özdil Nami earlier this year; but the promised summary of those talks has yet to appear. Turkey’s President Erdoğan – a supporter of EVKAF – has also been silent.

Will the UN Talks produce the first international agreement which fails to uphold this centuries-old legal principle?

One prominent lawyer has already revealed that large amounts of EVKAF land in the South were improperly “conveyed” to Greek Cypriot tenants under the Colonial Regime. According to Taner Erginel, a former Chief Justice of the TRNC:

“Under Ottoman and early British rule, Maraş belonged to Evkaf. In 1907 the British Colonial Administration passed a general prescription law (Law 12/1907) allowing people to own properties they possessed without dispute for 10 years; similar English Law specifies 12 years. Under this law Maraş titles were transferred to Greek inhabitants.”

“However in 1907, there was another law in force in Cyprus: Ahkamul Evkaf – the Law of Religious Foundations. According to Ahkamul Evkaf, no Evkaf property could be owned by way of prescription. Evkaf property title is owned in perpetuity. Since Ahkamul Evkaf is a specific law for Evkaf properties it has priority and should have been applied instead of any other law. Applying the general law of 12/1907 and not the specific law was wrong and against legal principles. So Greek Cypriot title deeds relating to, for instance, 500,000 dönüms in Maraş are defective.”

The same principle, says EVKAF, applies to 14% of all land in the present Republic of Cyprus, and it has the deeds to prove it. T-VINE has seen leases dating from the 1930s, where property has been tenanted on a continuous basis – only for the tenant to be suddenly described as the owner, with no apparent legal sanction whatsoever.

So far, the UK’s Foreign and Commonwealth Office, like the Greek Cypriot government, has refused to open its extensive EVKAF archives for inspection, although it took a big hand in running the charity from 1878 until 1958, just before Independence.

Despite its 1960 Treaty obligation to safeguard Turkish Cypriot rights on the island, the FCO has declined to become involved so far; while T-VINE can confirm that the White House firmly rejects any suggestion that it is about to compensate EVKAF for its lost land.

“Losing Ekvaf lands would be an economic disaster of unimaginable magnitude”

Ersu Ekrem, chair of the British Turkish Cypriot Association, comments: “I commend T-VINE for highlighting the dangers faced by Evkaf. Losing these lands, which are the collective wealth of Turkish Cypriots, would be an economic disaster of unimaginable magnitude. The BTCA has highlighted this with seminars in the past. I sincerely hope that Evkaf and the Turkish Cypriot authorities will prepare a campaign to demand  the return of those lands that are legally owned by Evkaf.”

The current Talks deadlock could be a blessing in disguise. Leading politicians in all parties – both in Ankara and Lefkoşa – must be alerted to the fact that there will be a real and permanent loss to the economy of the TRNC, if they do not start to defend EVKAF’s rights straight away.

And it won’t be an easy task: hundreds of thousands of former EVKAF dönüms have been transferred to the Greek Orthodox Church, where they effectively form part of the assets of the Bank of Cyprus, of which Archbishop Chrysostomos is a Director.

EVKAF should take this opportunity to strengthen its Legal and Strategic Consultant teams for a long, hard battle; and its Board of Directors should be bolstered by the appointment of people with good commercial backgrounds.

Former TRNC Chief Negotiator Ergün Olgun had this to say:

“Like the TRNC Presidency in respect to the partnership negotiations with the Greek Cypriot side, EVKAF badly needs help and advice on EU law, EU practices, federalism, federal finances, PR, vakf law (its international dimension), to name but a few. Neither the TRNC nor Turkey has quality expertise on these subjects. They are dealing with the Greek Cypriot side, which has traditionally been using international expertise.”

“At the time of the negotiations of the Annan Plan we also employed international expertise, thanks to the support of our Founding President Rauf Denktaş, and we benefitted from that help enormously.” 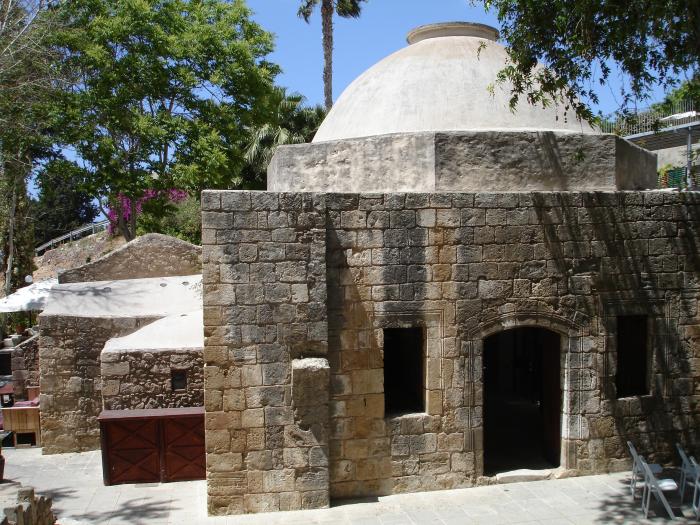 Above all, EVKAF needs to make the basic facts of the situation familiar to the world’s leaders, to gather support for a just-but-unknown cause, before it is too late.

Main photo © Yudina of Maraş / Varosha, in Famagusta, uninhabited since the 1974 War