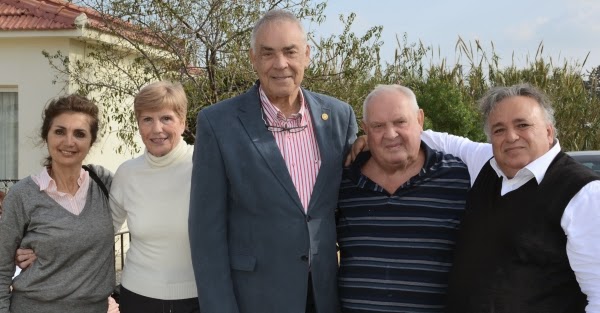 A ruling set down by Girne District Court in North Cyprus could shape the future of hundreds of TRNC property owners caught up in the country’s stealth mortgage debacle. Judge Talat found in favour of residents on the Kulaksız 5 site in Lapta, who have been battling since 2008 to prevent Akfinans Bank from seizing their homes as assets against loans which their property developer had failed to repay.

In addition to finding in favour of the Kulaksız 5 (K5) families, the Judge also passed a damning verdict on Akfinans Bank, claiming its actions were “fraudulent”. He has ordered that the ownership of the villas be returned to the K5 residents and that the kocans (title deeds) reflect the original status of ownership before the loans were issued.

In his decision, Judge Talat said not only did Akfinans know the land offered as surety in 2005 by the landowner Yılmaz Yüksel and his property developer partner Abdurrahman Güney, director of Girne-based Kulaksız Construction, was already sold, but they also chose to wait several years before taking any action when these gentlemen defaulted on their loan repayments.

Güney, who had already defaulted on a small loan of £1,600, took out a second loan of 104,000 TL loan (about £44,000), offering the bank security in the form of three plots on K5, which is located in the small town of Karşıyaka, west of Girne. The three plots, each with a villa, were occupied by the landowner Yüksel. The remaining ten plots, which also contained newly-built villas, had been sold by Kulaksız Construction to foreign buyers, some of whom had already taken up residence on the site.

Instead of seizing the three plots when Güney again defaulted, Akfinans Bank preferred to allow the developer’s debt to rise through the exorbitant levels of interest they were legally permitted to charge – 80% compound per quarter. By 2008, the debt was over a million TL, which the bank then tried to pass off on to the innocent K5 homebuyers claiming that the surety offered by Güney was for the entire K5 estate, described as ‘bare land’ on the loan agreement the bank had subsequently lodged at the TRNC Land Registry.

Even though the new homebuyers had complied with all the rules regarding property purchase in the TRNC, the slow and bureaucratic nature of the government department administering land registry, coupled with poor legal services and other loop holes in the system meant their purchases were not properly registered. It was these failures, the homeowners claimed – and the District Court agreed – that the bank was able to exploit.

When the 17 residents of K5, many of them old-age pensioners who had invested their life savings into retirement homes in North Cyprus, refused Akfinans’ demands to pay off the property developer’s debts, they were forced to endure a campaign of harassment.

For Sale signs were put up outside their homes and in 2010 an auction was held to sell their properties. Although it was protested by some 750 people, including former TRNC President Rauf Denktaş, this did not deter Akfinans Bank who ‘bought’ all the K5 homes. As a result, and with the TRNC justice system initially unwilling to recognise their rights as property owners, the K5 families were forced to live with the daily threat of eviction.

Following the auction, the bank intensified its actions against the homeowners. First they had the road leading to their homes dug up to prevent access. The K5 families then risked having their properties seized when they were out.

The bank had taken possession of Pauline Read’s vacant villa in July 2010. Then, in March 2011, three of the bank’s representatives were photographed breaking into the villa of another resident even though they did not possess a warrant or court order for access, and forcibly changed the locks. One of the men was captured as he climbed through the bedroom window of Eva McCluskey, who was in the UK at the time to support her husband through major surgery.

Trying to document the situation was also perilous for the K5 residents as the bank’s directors, the Kader family, filed nonsense complaints with the police. Cyprus Today columnist İpek Özerim spent an evening at Lapta police station trying to assist Pauline Read over such an incident three years ago.

The K5 residents, however, refused to give up. As public awareness grew about their plight, which Pauline Read described as a“living hell”, the innocent homebuyers started to receive extensive support from individuals and organisations across North Cyprus and from the Turkish Cypriot diaspora. These included the Home-Buyers Pressure Group, Embargoed!, former Chief Justice Taner Erginel, Erdil Nami the former President of the Turkish Cypriot Chamber of Commerce, leading businessman Mustafa Toros, and the Make North Cyprus Better (MNCB) campaign.

One of K5’s most prominent supporters was Rauf Denktaş, himself a barrister by profession, who described the K5 situation as “a grave injustice”. In a self-penned article published in Cyprus Today on 16 June 2010 following the auction of the K5 properties, the TRNC’s top politician warned the country’s property sector would suffer “a loss of prestige and confidence” unless the government stepped in with remedial action, claiming it was unacceptable for TRNC banks to, “charge any level of compound interest and choose the time of demanding their money irrespective of the vested interests of others.” He also stated that the banks could even be open to negligence claims for their improper actions.

In its press statement following the landmark ruling on 4th December, MNCB pointed out that, “the Police and Attorney General’s Office may well have grounds for criminal proceedings against some errant Banks. The Central Bank could censure offending Banks, and it has the power to withdraw Banking Licenses.”

Battle not yet over, Turkish Cypriot PM promises action

Although Akfinans has appealed the ruling, many agree that Judge Talat’s historic decision goes some way in restoring credibility for a sector which flatlined once the huge number of property injustices inNorth Cyprus surfaced. This test case is expected to set a vital precedent for others facing similar legal battles, including the residents of the Olive Grove and Harmony sites who are fighting the Koop and Near East Banks respectively over debts generated by stealth mortgages. However the ruling in itself will not settle all such cases or prevent new cases emerging.

In his verdict, which came after evidence was presented by the K5 families and Akfinans Bank during hundreds of court hearings that took place over a period of six years, Judge Talat acknowledged that important property laws were lacking in North Cyprus and he tried to clarify some of the anomalies as part of his ruling.

Following his Judgement, the TRNC authorities are being urged to close the remaining loopholes by amending laws around Specific Performance and Mortgages. The aim is to build on the legal reforms undertaken by the previous government, which followed the public outcry over injustices the expat communities and Turkish Cypriot families in the TRNC were facing at the hands of unscrupulous banks, lawyers and developers. The new rules offer new TRNC homeowners some important safeguards, but more needs to be done.

On 12th December, an MNCB delegation that included former Chief Justice Taner Erginel and MNCB Joint Secretary Malcolm Mitcheson met with Prime Minister Özkan Yorgancıoğlu to discuss the ramifications of the K5 Ruling. The delegation asked the Prime Minister to permanently outlaw stealth mortgages by passing new legislation that ensures all contracted parties to a plot of land expressly give their consent before any new charges are placed on the property, with clear penalties for those who flout the law.

They also pressed the government to intervene and assist the historical victims of property injustice in the TRNC, caused by stealth mortgages and related bad practices, many of which are illegal in European countries. Mr Yorgancıoğlu was advised that unless these problems were resolved there would be “a continuing lack of confidence to invest in TRNC housing by overseas buyers.”

According to the MNCB, the PM has agreed that restoring confidence in the overseas House Buying Market was “an essential driver towards economic prosperity in the TRNC” and has promised to implement the necessary reforms “as quickly as possible”.

Watch the Banks Behaving Badly documentary, produced by Make North Cyprus Better in 2011, which includes extensive interviews with some of the families from the Kulaksız 5 site and those who have been campaigning for justice on their behalf.