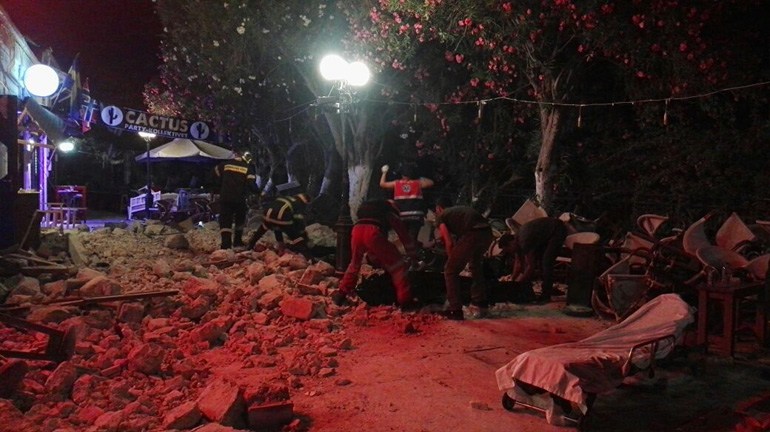 A Turkish man is among the victims to have died on the island of Kos following a powerful Aegean earthquake that struck in the early hours of Friday.

The 6.7-magnitude quake was most acutely felt in the holiday resort towns of Bodrum, Datca and Muğla, on the Turkish coast, and on the Greek island of Kos.

The first tremors hit at 01:31 on Friday, leaving two dead and at least five seriously injured, Pictures show extensive damage to buildings and infrastructure. More aftershocks measuring 4.0 continued throughout the night. The earthquake also triggered a tsunami in nearby Gumbet, in Turkey, which flooded buildings and carried parked cars away.

According to the US Geological Survey, last night’s earthquake was very shallow – only 10km (6.2 miles) below the seabed – and its epicentre was just 10km south of Bodrum and 16km northeast of Kos. People nearly 100km away, in Didim, Turkey, also felt the severe tremors, with one British tourist telling the BBC his hotel started to “shake like jelly”. The region sits on a known faultline and is regularly hit by earthquakes.

Dozens were injured in last night’s quake – the most serious in years. While not naming the victims, officials in Kos said a Turkish and a Swedish national had died after being crushed by a collapsed wall in the bar they were in. A hundred others were treated for a raft of injuries at the local hospital with the most serious transported to facilities in Crete and Athens for treatment.

Many tourists and residents fled their hotels and homes and spent the night outdoors. It’s not clear what will happen to them tonight. Turkey has already sent a boat to Kos to collect its visiting nationals, to help ease the pressure on the local authorities.

Occurring during the peak summer season, the earthquake is likely to have a serious impact on holidaymakers due to travel to this part of the Aegean. Tour operators are working with the authorities to determine how best to proceed.

Before and after – can’t believe the devastation, my favourite restaurant in Kos in ruins .Stay safe people and tourists of #Kos #earthquake pic.twitter.com/hJg7GBEPWE