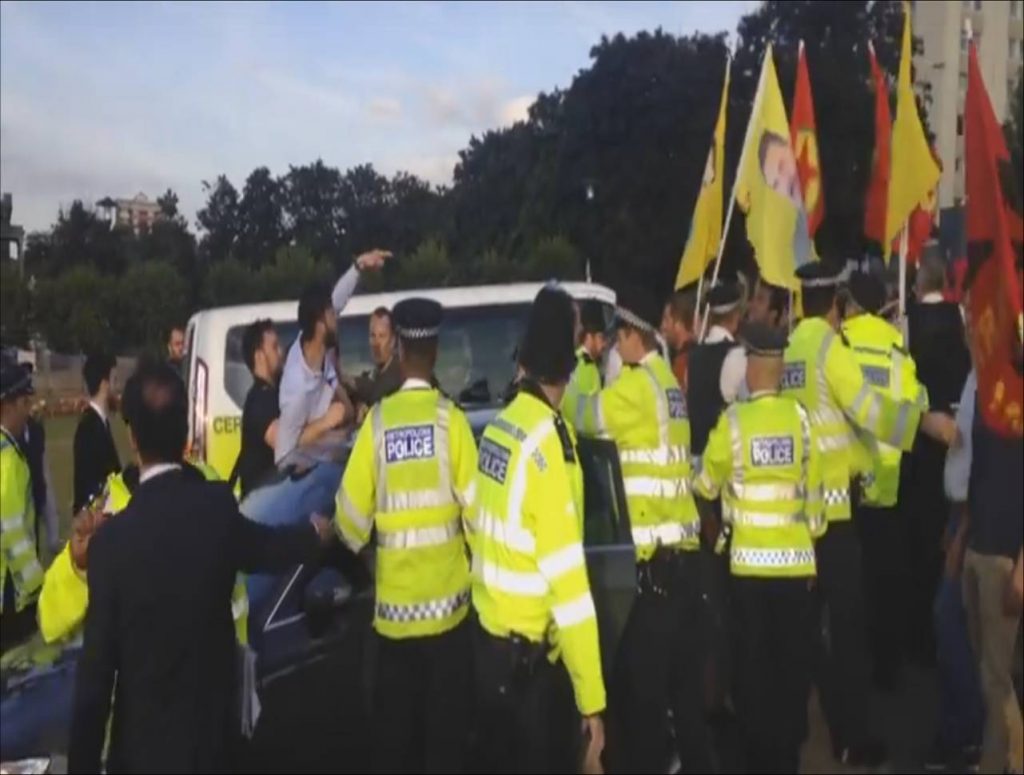 Last Friday, tensions boiled over outside the Walthamstow Assembly Hall where pro-AKP government supporters had gathered to commemorate the first anniversary of the attempted coup in Turkey.

An assortment of anti-AKP protestors had gathered at the top of the driveway leading to the civic centre in Walthamstow. A few held signs demanding justice for sacked Turkish teachers Nuriye Gülmen and Semih Özakça, who are currently on hunger strike in jail in Turkey. However, the bulk of those demonstrating – some 30 people – were holding PKK flags and banners of jailed terror leader Abdullah Öcalan, chanting “We are PKK, PKK is us”, and “Thief, murderer Erdoğan”.

Officers from the Metropolitan (Met.) Police were present to maintain the peace, but their willingness to permit supporters of the PKK – listed as a terrorist organisation by the British government – incensed event organisers, the Union of European Turkish Democrats (UETD). The group is known for its close links to Turkey’s ruling AK Party.

UETD President Zafer Sırakaya led the objections to the presence of PKK supporters. In heated conversations captured by media, Mr Sırakaya and his UETD colleagues insisted that as the PKK was a proscribed group, its supporters should not be allowed to assemble, but their remonstrations fell on deaf ears.

Using social media to stream live their protest, demonstrator numbers grew over the course of the evening. When they tried to move into the actual grounds of the building, scuffles broke out with guests and event organisers determined to resist them, and police desperately trying to keep the two factions apart.

Police back-up quickly arrived and intervened. Five men were arrested on suspicion of assault at the scene. They were taken to an East London police station for questioning. All five men have since been released under investigation and police continue to make enquires.

Answering questions on policing that night, a spokesperson for the Met Police told T-VINE:

“Officers attended Walthamstow Town Hall at 20:50hrs on Friday, 14 July after a number of protestors had gathered outside following a pre-planned pro-Turkish government event. An appropriate policing force was in place.”

When challenged on why police allowed pro-PKK supporters to blatantly promote their terrorist cause, the spokesperson referred to the Met. Police’s statement on proscribed groups:

“A person commits an offence contrary to the Terrorism Act 2000 if in a public place they “display an article, such as a flag, in such a way or in such circumstances as to arouse reasonable suspicion that they are a member or supporter of a proscribed organisation”. However, each case will depend upon its own particular facts including any supporting evidence.”

They added, “We recognise that activity and behaviour like this can cause concerns within communities, and we are committed to disrupting and dealing with any groups or individuals who aim to cause harm or spread fear and hatred, no matter what their ideological or political motive.”

The Met have come under fire before for failing to take action against supporters of terrorism. Two years ago, they spoke to, but did not arrest a man displaying a large Daesh flag on his back, as he walked close by to Parliament.

The PKK is listed as a terrorist organisation by many governments around the world. It has been waging a war against the Turkish state since 1984. Initially, their aim was to form a separate Kurdish state, but PKK leaders now say they just want autonomy. Their violent campaign targets the Turkish military, police and civilians and has resulted in the loss of over 40,000 lives. Recent victims include two teachers – Necmettin Yılmaz (aged 24, in Tunceli) and Şenay Aybüke Yalçın (aged 22, in Batman) – both killed in Southeast Turkey.