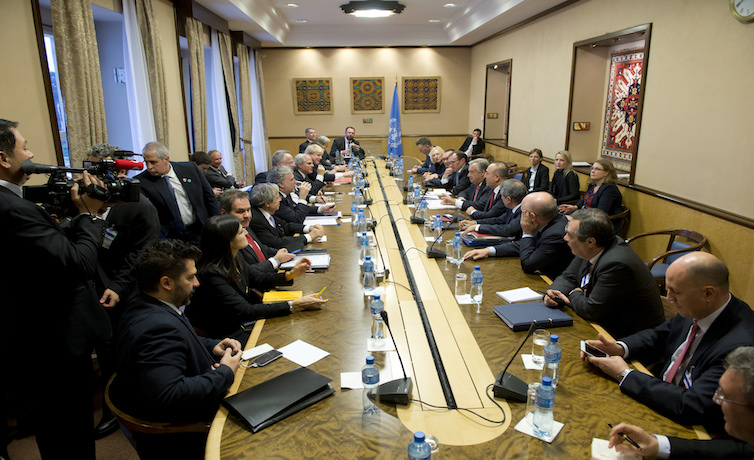 The structure of the forthcoming Geneva conference was set out by a TRNC Presidential aide. Speaking on TV, Erhan Erçin explained that simultaneous discussions will be held at the summit, with Greek and Turkish Cypriots discussing governance and power sharing, the EU, economy and property issues on one table and on another, Greece, Turkey and Britain will join the two Cypriot sides to review the island’s security and guarantees.

Erçin, who is the TRNC President’s Special Advisor on Diplomacy and EU Affairs, said that UN Special Advisor Espen Barth Eide was working on “a document which will determine the guidelines of the systematic work that will begin on 28 June. The participants made clear their approaches during the technical work that took place in Mont Pelerin, that one side’s security should not create the perception of a threat for the other side. The security and guarantee issue will be determined in this framework in Geneva.”

During the TV interview, Erçin stated that the two Cypriot leaders Mustafa Akıncı and Nicos Anastasiades had met over 70 times, while the negotiators have held over 170 meetings in the past two years. This included three meetings in Mont Pelerin, and two in New York, during which time more than 40 rapprochement papers were tabled.

“There was a request from one side for the prioritised discussion of the security and guarantee issues and for these to be concluded at the Cyprus conference in Geneva. At the recent meeting held with the UN Secretary General Antonio Guterres in New York, it was agreed that this would not be possible. All issues will be discussed in parallel at two different tables at the Cyprus Conference in Geneva. From now on, we have to focus on obtaining positive outcomes from the conference” said Erçin.

The talks were recently on the verge of collapse, with Eide unable to find a format acceptable to both sides to hold a new round of peace talks in Geneva. Last week, UN Secretary General Antonio Guterres hosted both leaders in New York and managed to find a way through the deadlock.

With Presidential elections looming in South Cyprus in February 2018, many view this as the last real chance for Akıncı and Anastasiades to pull together a comprehensive solution.

The Foreign Ministers of the three Guarantor Powers – Britain, Greece, and Turkey – attended the Conference on Cyprus held in Geneva on 12 January 2017 to discuss security and guarantees that form the sixth and last chapter of the negotiations.

At that time, a joint statement issued by the Guarantor Powers via the UN said their intention was, “to find mutually acceptable solutions on security and guarantees that address the concerns of both communities. They recognised that the security of one community cannot come at the expense of the security of the other. They also acknowledged the need to address the traditional security concerns of the two communities while at the same time developing a security vision for a future united federal Cyprus.”

Under the treaties which formed an independent Republic of Cyprus in 1960, former colonial master Britain, and the two motherlands Greece and Turkey became the three Guarantor Powers which could jointly or unilaterally intervene in the island to maintain the peace. The agreement allows for 650 troops from Turkey and 950 troops from Greece to be stationed on the island. Both currently have thousands more on the island, with senior soldiers from these two Guarantor countries heading the armed forces of their respective side of the island.

Greek Cypriots want to dispense with the Guarantor system completely, associating Turkey’s military rights with their trauma during and after the 1974 War, which saw some five thousand killed and tens of thousands displaced by the forced split of the island into two ethnic zones.

Turkish Cypriots are adamant the Guarantor system needs to be maintained. As the numerically smaller of the two communities, they continue to feel vulnerable. They first came under attack from Greek Cypriots in the 1950s during the latter’s quest for independence from the British, and again following a bloody coup in December 1963, which forced them out of government. The Turks lived under brutal oppression until the summer of 1974, when Turkey – using its rights as a Guarantor Power – intervened to stop a Greece-backed coup on the island.

Many Turkish Cypriots continue to fear the intentions of Greek Cypriots. The media in the South is awash with news of how the Government, Church and Opposition parties continue to promote Hellenism, which is also a core part of the school curriculum. Numerous hate crimes committed against Turkish Cypriots in the South, including former TRNC President Mehmet Ali Talat, and a musician performing at a peace concert, has failed to see a single person successfully prosecuted.

More recently, an effort by far-right party ELAM to have the Enosis (union with Greece) Plebiscite celebrated annually in schools in South Cyprus – a historical moment that goes to the heart of the Cyprus Problem – was passed in the Greek Cypriot Parliament. There was uproar over the border, with Turkish Cypriots from across the entire political spectrum uniting to condemn the decision. President Akıncı pulled out of the talks until Greek Cypriots passed a second motion repealing the first.

Britain has previously said it would be happy to change or even see an end to the Guarantor System. However, it would refuse to remove completely its two sovereign bases from Cyprus, which it sees as separate to the Guarantees and the island’s security.