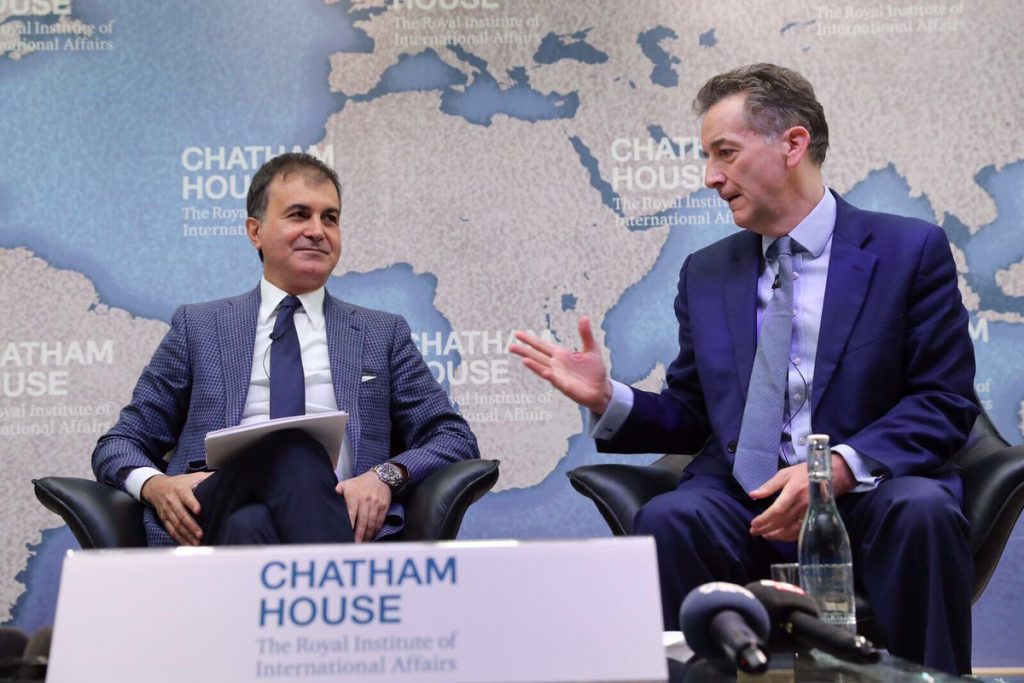 Speaking at Chatham House in London last week, Turkish EU Minister Ömer Çelik argued that both Britain and Turkey will still play an important role in future European affairs. Referring to the UK as “Europe’s gateway to the Atlantic, and Turkey, Europe’s gate to Asia,” he added that both countries will continue to shape the politics of the continent.

Among the most notable lines of his speech was the statement that Britain and Turkey would remain “two pillars of the European architecture” regardless of Brexit and whether Turkey was a European Union member or not. Moreover, if the strengthening bilateral economic and security relationship between the two countries—who sit at opposite ends of the continent—is any indication of this, it would appear that both are well situated to do so.

Visiting Ankara in January for instance, British Prime Minister Theresa May announced a multi-million pound agreement that British and Turkish aerospace companies would collaborate on building the next generation of Turkish fighter jets, while her Turkish counterpart, Binali Yıldırım also declared that the two countries would make a free trade deal after Brexit.

Importantly, it was during Mrs May’s trip that Mr Yıldırım also lamented the difficulties faced by both countries in their relationships with Brussels when asked about accession to the EU in a joint press conference. As the Turkish Prime Minister put it, “the ones who enter are pişman (regretful) the ones who don’t enter are pişman.”

The timing and place of Çelik’s 13 September statement is significant, coming ten days after German Chancellor Angela Merkel declared in a TV election debate that “I don’t see them [Turkey] ever joining and I had never believed that it would happen”.

Mrs Merkel’s words were also matched by her main rival Martin Schulz, who claimed he would quash Turkey’s European ambitions if voted in as chancellor. As the most populous and economically powerful member of the soon to be 27 member bloc, the influence of Germany over EU enlargement cannot be understated.

Amid such hostility from Berlin to the prospect of Turkish membership, Ankara’s EU Minister’s preferred moment to speak in this context could be a sign that his country is giving up on joining the union, but still wants to stay a crucial partner to it, a not too dissimilar position to Britain.

Speaking exclusively to T-VINE from Brussels last Thursday however, the Secretary General of the European Parliament Turkey Forum, Laura Batalla Adam said that at present Turkey “remains a candidate country to the EU and full membership is our goal on both sides”.

When asked whether any future British relationship with the EU might also be suitable for Turkey if it were unable to join the bloc, Ms Batalla Adam responded by saying “at the moment, full membership of Turkey is the option on the table” and added that “the accession process would have to be ended or suspended in order to consider other scenarios, so for the time being any similarity with the Brexit case is not possible”.

She also pointed to the fact that Ankara’s relationship with Brussels differs from that sought by Britain, as Turkey and the EU are closely integrated economically by their Customs Union. Britain, for its part, appears set to leave both the Customs Union and the European Single Market upon leaving the EU in March 2019 or up to three years after following a transitional period, after which its new arrangement with Brussels would come into place.

So for now, paraphrasing the Conservative MEP and leading Brexiteer Daniel Hannan, as Britain is seeking to be “a good neighbour rather than a bad tenant” to the EU, Turkey, despite a string of spats with member states in the not too distant past, is still pursuing full accession, but the question is, for how much longer?