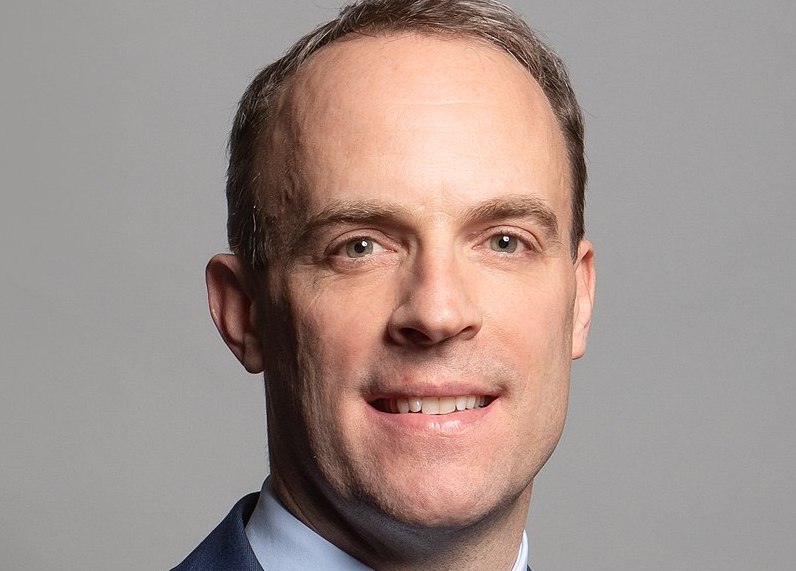 British Foreign Secretary Dominic Raab is due in Cyprus on Thursday, 4 February, to meet with the two Cypriot presidents Ersin Tatar of the Turkish Republic of North Cyprus (TRNC) and Nicos Anastasiades of South Cyprus.

Dominic Raab’s  24-hour visit will also include a meeting with Elizabeth Spehar, the head of United Nations Peacekeeping Force in Cyprus (UNFICYP) and the Deputy to Jane Holl Lute, the UN Secretary-General’s Special Advisor on Cyprus.

The British Foreign Secretary is expected to meet with the Greek Cypriot leader Anastasiades and his Foreign Minister Nikos Christodoulides in the morning, followed by meetings with Spehar, and then President Tatar in the afternoon.

Alongside the upcoming UN talks, the meetings will likely include bi-lateral relations with the two Cypriot sides in the wake of Brexit, and avoiding the recent tensions in the Eastern Mediterranean.

Turkey’s Foreign Minister Mevlüt Çavuşoğlu will visit the TRNC on Tuesday for discussions ahead of Raab’s meeting.

The UN Secretary-General Antonio Guterres is currently working towards the resumption of the Cyprus Talks. The UN chief indicated on Thursday, 28 January, that the UN will host an informal five-way summit in early March, either in Geneva or New York, attended by the Turkish Cypriots and Greek Cypriots, along with Cyprus’ three Guarantor Powers Cyprus, Turkey, Greece and the United Kingdom (UK).

Raab’s visit to Cyprus will be the first by a British Foreign Secretary since Boris Johnson’s visit in 2016.

Johnson’s arrival on the island five years ago was during an intense period of negotiations between the two Cypriot leaders that culminated in the Crans Montana summit in July 2017 involving Ersin Tatar’s predecessor Mustafa Akıncı, Anastasiades and the three Guarantors. Despite significant compromises by the Turkish side, the Greek Cypriot leader opted to walk out of Crans Montana.

Ankara and various Turkish Cypriot politicians have since said that the internationally-backed bi-zonal, bi-communal federal solution for Cyprus – in play since the late 1970s – is dead and a new approach is needed to break the political deadlock.

Ersin Tatar was elected as TRNC President in October 2020 on a pledge to champion a 2-state solution in Cyprus, which in essence already exists on the island.

Guterres stated on Thursday that while his mandate from the UN Security Council is for a “bi-zonal, bi-communal solution in Cyprus”, he was not averse to seeking a change or expansion of the political framework.

“There are these changes in the administration of northern Cyprus. It is important that there is a chance for all the people to frankly discuss among themselves how they see the future and to see how to move forward,” Guterres said.

“Obviously, this [UN bi-zonal, bi-communal mandate] is not an impediment for the parties to present the positions they will present. I am always ready to go to the Security Council and if there is an agreement of the parties enlarging the scope of the negotiations, to be interpreted as a common agreement in this regard,” he added.

The UN chief stated that the first step is to resume the talks, so the parties can come together, and to see the result of that discussion.

Guterres went on record to state while he is obliged to adhere to the UN mandate, he is also open to listening to everybody, and “to take the conclusions of that discussion based on whatever the parties come to a common view about the future.”