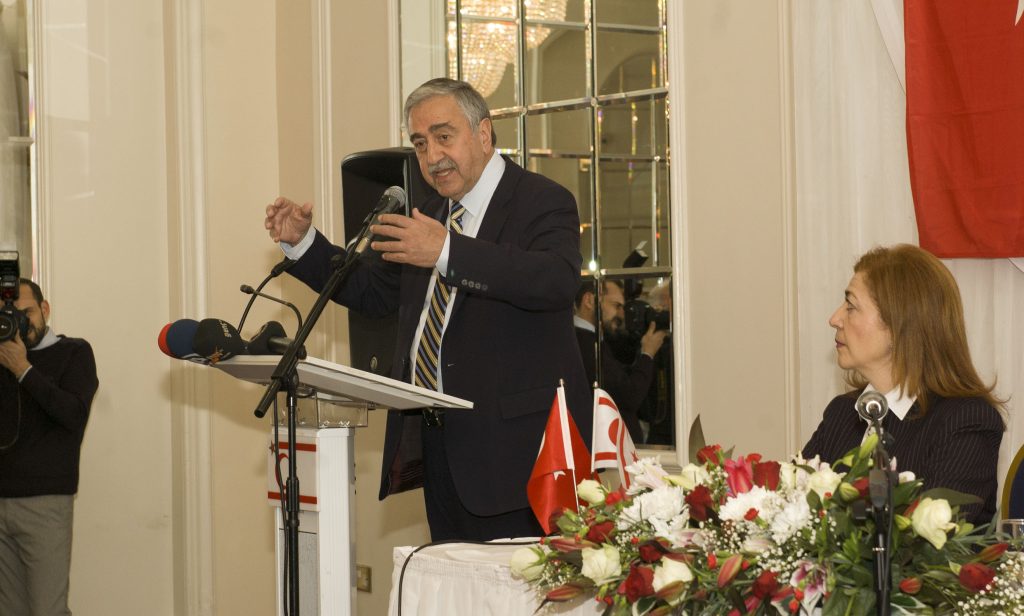 Despite being a Guarantor Power to Cyprus, neither the British Prime Minister nor Foreign Minister have extended an official invitation to Turkish Cypriot leader Mustafa Akıncı to visit London in the two-and-a-half years he has been President of the Turkish Republic of Northern Cyprus, peers and guests were told at a special briefing at the House of Lords on Wednesday 22 November.

Although TRNC officials made efforts to facilitate a face-to-face meeting, no invitation was forthcoming, forcing the Turkish Cypriot leader to make his own plans. He travelled to the British capital last week, where he met with the Diaspora and also updated the All-Party Parliamentary Friends of the TRNC Group (TRNC APPG) about the Talks.

President Akıncı’s experience stands in stark contrast to his Cypriot counterpart Nicos, who has met with both Theresa May and her predecessor David Cameron at No.10. The Foreign and Commonwealth Office confirmed the Turkish Cypriot leader was offered a meeting with Alan Duncan, the Minister for Europe, who regularly hosts meeting with lower-level Turkish Cypriot politicians and officials, including Akıncı’s Chief Negotiator Özdil Nami, whom he met with at the end of October. Sensing a slight, the TRNC Presidency turned down the opportunity to also meet with Mr Duncan.

The President’s disappointment at his treatment by the Conservative Government was palpable during his House of Lords talk hosted by Lord Sharkey, chair of the TRNC APPG. One peer, who preferred to remain anonymous, branded the British authorities’ refusal to grant a meeting with either the Prime Minister or Foreign Minister as “extremely disrespectful behaviour”.

The briefing to British Parliamentarians and other invited guests ran for a little over two hours. During the session, the veteran politician candidly gave insights about the negotiations with South Cyprus to unite the island.

Since winning office in May 2015, President Akıncı has taken part in over 70 meetings and that there were “no untouched issues left”. A series of international conferences, attended by the UN and all three Guarantor Powers, Greece, Turkey and Britain, raised hopes that a solution to the half-century old problem was imminent, but it was not to be. The talks broke down, seemingly irrevocably, at Crans Montana in July.

The TRNC President said that the Turkish side was willing to make significant concessions at Crans Montana, including over the guarantees, which he claimed took Greece and the Greek Cypriots by surprise. With Presidential elections looming in the South in early 2018, Akıncı believes the Greek Cypriot leader was “unwilling to take the necessary political risks” to create convergence on the final key issues, and felt obliged to walk away from the talks because Anastasiades did not feel he could “sell the package to his people”.

Akıncı contrasted this with his own approach, which included being the first Turkish Cypriot leader to present a map of Cyprus showing the territory allocated to the two newly created federal states of Cyprus after adjustments were made. While many lauded Akıncı’s bold moves and pro-solution sentiments, these did not seem to have fully found its way into UN Secretary General António Guterres’s report on Cyprus.

The TRNC President expressed his disappointment with the report for not fully conveying the events at Crans Montana, even though various leaks had unofficially helped make clear who was at fault with the collapse of the negotiations.

The 69-year-old President said he expects the UN Secretary General to extend a fresh invitation to himself and the new leader of the Republic of Cyprus to resume the talks early in 2018, after elections on both sides have concluded. The Turkish Cypriot leader also made it clear that he does not want to be part of the “vicious cycle” of “open-ended talks”, and insisted future negotiations had to be “time-bound”. He also admitted that the climate to strike a deal “is far harder today than in 2004”, when the two sides held an historic referendum to unite the island.

Akıncı says it is clear that “Greek Cypriots do not want to share power with Turkish Cypriots” and that a “mental transformation in the South” was essential for a political solution. In response to a question by Lord Hannay, the President said for the sake of future generations of Cypriots, it was important “not to lose hope or lose dreams of a united Cyprus” and to keep trying to solve the problem, although he acknowledged shifting entrenched views and changing cultural behaviours was extremely tough. Ultimately it is “up to Greek Cypriot society” to choose their future and their vote in the forthcoming Presidential elections will indicate this.

Various peers praised the progressive stance of Mustafa Akıncı, and his “sincerity” in wanting to unite Cyprus. When asked what Guarantor Britain could do to help Turkish Cypriots, the President suggested that Turkish Cypriot athletes be allowed to participate in the Commonwealth Games and the UK Government permit foodstuffs from North Cyprus to make their way to British markets more easily. He also wanted the security issues over Ercan to be resolved.

In response to a question by Lord Ahmed about the role of the EU, President Akıncı was emphatic that the Turkish Cypriots’ future remained wedded to Europe and that he wants North Cyprus to continue on its path of being “Europeanised” by harmonising its laws and standards to match those of the EU. However, as Embargoed!’s chair Fahri Zihni pointed out, the fact that the EU had suspended its North Cyprus Taskforce following pressure from the Greek Cypriot side does not bode well.

President Akıncı to Lord Maginnis: “is your Government ready to recognise Lefkoşa? If so, bring me the agreement and I will happily add my signature”

Long-term Turkish Cypriot ally Lord Maginnis asked that, given the failure of the Talks, whether it was time to pursue a policy of TRNC recognition. Humouring the peer, President Akıncı responded by asking him is: “Your government ready to recognise Lefkoşa? If so, bring me the agreement and I will happily add my signature after theirs”, to roars of laughter in the room.

The TRNC President explained that he did not want to pursue unrealistic political avenues and that the Turkish Cypriots’ fate was tied to the interests and intents of many other actors. For him the most pressing aspect in the absence of a solution was to “end the unjust embargoes”. On that point, Fahri Zihni asked why there was no TRNC cross-party group set up to tackle this very issue. The President said he would look into setting this up.

Zihni also raised the complex Cyprus property issue, asking ‘why the two sides seemed to favour a solution that would leave thousands of people at loggerheads’? The Turkish Cypriot leader responded by stating the “Greek Cypriot side preferred individual claims” to be allowed and that a property commission would be formed following a solution that would use “clear criteria” to help determine the outcomes of contested property.

President Akıncı explained that during the talks, UN head Guterres had suggested the Commission determine property ownership based on which side controlled the territory it was situated on, so if a given property was on land going back to Greek Cypriots the original owner should get the nod, if it was staying in Turkish Cypriot hands, the current user would retain ownership rights. “Compensation, exchange and restitution would be used to address all ownership disputes”, said the Turkish Cypriot leader, but he side-stepped Zihni’s point about the prospect of conflict between the two communities caught up in property disputes.

Baroness Hussein-Ece pressed on the point about Greek Cypriots objecting to North Cyprus harmonising with the EU. She said given their vocal concerns about the changing demographics of the North, surely it was better Turkish Cypriots were “more Europeanised”? She also asked whether “the mass exodus of many young Turkish Cypriots and the reasons for it is even on their [Greek Cypriot] radar?”

Politicians attending the House of Lords briefing included Baroness Sarah Ludford, Lord Hannay and Lord Northbrook. The event however only drew one MP, Enfield North’s Joan Ryan, who previously served as a Cyprus Envoy. T-VINE was told the TRNC APPG had sent invitations to numerous MPs, including Edmonton MP Kate Osamor, who is the chair of the Cyprus APPG. Several had indicated they would attend the briefing, but had failed to show.

During his London visit, President Akıncı also gave a talk in Turkish to members of the Diaspora. It was noticeably that the packed North London venue was attended by mainly elderly people. The audience asked many tough questions of the Turkish Cypriot leader, including whether he would “resign in the face of failure at the talks”, and considering its considerable land ownership claims across the island, why the President “had not championed Evkaf rights at the negotiating table”.