Friday, 1stFebruary, will mark twenty years since one of Turkey’s most influential singer-songwriters and TV personalities Barış Manço passed away from a heart attack aged 56. Characterised by his long hair, horseshoe moustache and flamboyant jewellery, he was adored by Turks of all ages.

During his 37-year career, Manço composed over 200 songs, and recorded and released music in multiple languages, including English, French, and German, performing and selling millions of singles and albums in Turkey and abroad. His musical repertoire encompassed many genres, from progressive rock to pop and Turkish folk music.

Known in Turkey as one of the ‘Godfathers of Anatolian Rock’, Manço was playing in bands while still at high school. He first emerged as an artist in the 1960s, enjoying short spells in various bands in Turkey and Europe.

CLICK here for tickets to the Psychedelic World of Bariş Manço: 20th anniversary London tribute night at the Jazz Café 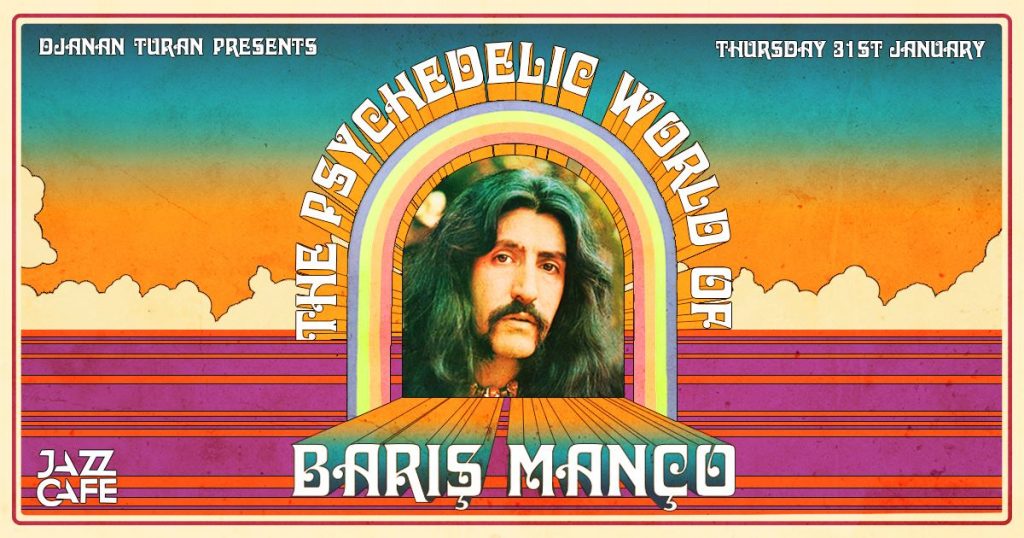 At the turn of the 70s, Manço recorded and performed with seminal Anatolian rock band Moğollar (The Mongols), before forming his own band Kurtalan Ekspres that would run until his death in 1999.

On Thursday 31 January, London’s Jazz Café is hosting a special tribute night to celebrate the life and music of this Turkish icon.

Curating the night is London’s very own psychedelic chanteuse Djanan Turan. We caught up with her to ask about why Barış Manço is such a special artist and what she has in store for us at the tribute concert.

It’s unusual seeing a tribute to a Turkish star like Barış Manço in one of London’s most famous music venues. How did the night come about?

Like many other Turkish people of my generation, I grew up listening to Barış Manço’s songs and adore his music. This year marks 20 years since he died, and it’s a happy coincidence that we managed to organise the [tribute] gig at the same time as his anniversary.

Jamming at home with my musician friends, we played his songs a lot and many times talked about organising a tribute night, mainly to enjoy ourselves and also to get others singing too. But we are musicians you know, so organisation is not the best of our skills. It’s also been hard to find a slot that works for the entire band given how busy everyone is and their existing schedules.

Last summer, my band and I played at the Jazz Café where one of the managers, Lev [Harris], is half-Turkish and he also loves Barış Manço’s music.  The venue has been doing tribute nights for the last couple of years, helping to put the spotlight on artists whose body of music deserves wider recognition.

Lev and I got chatting and thought we should do one for Barış Manço. We have a huge Turkish/Kurdish/Cypriot community in London that loves him, but Barış Manço also has many international fans too, so it would be almost criminal not to remember and celebrate his music on his 20thanniversary.

What did you love most about Barış Manço?

So many things, and the more I find out about him, the more I love him.

The first time I saw him on the telly, I was 5 or 6 years old. He was singing Ali Yazar Veli Bozaror Kazma. I remember being absolutely mesmerised by his outfit, unusual lyrics, his attitude, everything. He seemed very otherworldly but somehow by that first moment, he already felt like a family member. And in time, he almost became one, to most people, with hundreds of songs he produced and his TV show with which he visited our homes once a week for years.

Also, as a songwriter I admire how diverse his writing was. He was able to cut so deep with his emotional songs like Dağlar Dağlar or Gülpembe. He could also make us laugh, think, see things from a different perspective when he sang about our day-to-day, our relationships within family members, friends or neighbours, the quirks of our culture with its good and bad.

He skilfully revealed so much of his love for the culture but also made so much satire of human behaviour that it’s like, by now, you pretty much know what he would say if you could ask him for some advice.

Alongside these, to me it looks like the guy never stopped, constantly pushing his creative boundaries. Besides all his idiosyncrasy and other worldliness, he makes music from the 60s until his death in 1999, decades of music he has written in three languages – Turkish, English and French – try and errors, various covers, he did seem to really want to reach people and never wasted anytime to work on achieving that. I have a lot of respect for that.

What can we expect on the night?

The audience will hear lots of beautiful Barış Manço songs, played by virtuoso musicians who love his music. We’ll play two sets, each about 45 minutes long, and we are being very meticulous in our selection process to give a good representation of the music he recorded during his career that spanned decades.

I must say, it’s not easy when the artist has released so many great works. My personal expectation is enjoying a night altogether, where everybody comes together in a huge singalong and we are swimming in a sea of nostalgia, joy and tears.

I am on lead vocals. The band comprises of many guys that I regularly play and record with, who also happen to be some of London’s finest Turkish musicians. Fatih Ebrem is on guitars, Taha Turan on bass, Comert on keys, and Tansay Omar on drums. Bubu, who is originally from Italy, but has a special interest in Turkish music, will be on percussion. Alice Mary Williamson, who is also in my band, will join us on flute and we will have a couple of special guests.

Tansay Omar has toured the world drumming for Bjork and Boy George in their hey day. He’ll be in the all-star Barış Manço tribute band at the Jazz Cafe

Which of Barış Manço’s songs are your favourite?

When it comes to my favourite songs, there are too many to list here. In my opinion Arkadasim Esek (‘My Donkey Friend’) will be one of the best kids’ song ever written, I wish it could translate to other languages, as kids elsewhere are really missing out.