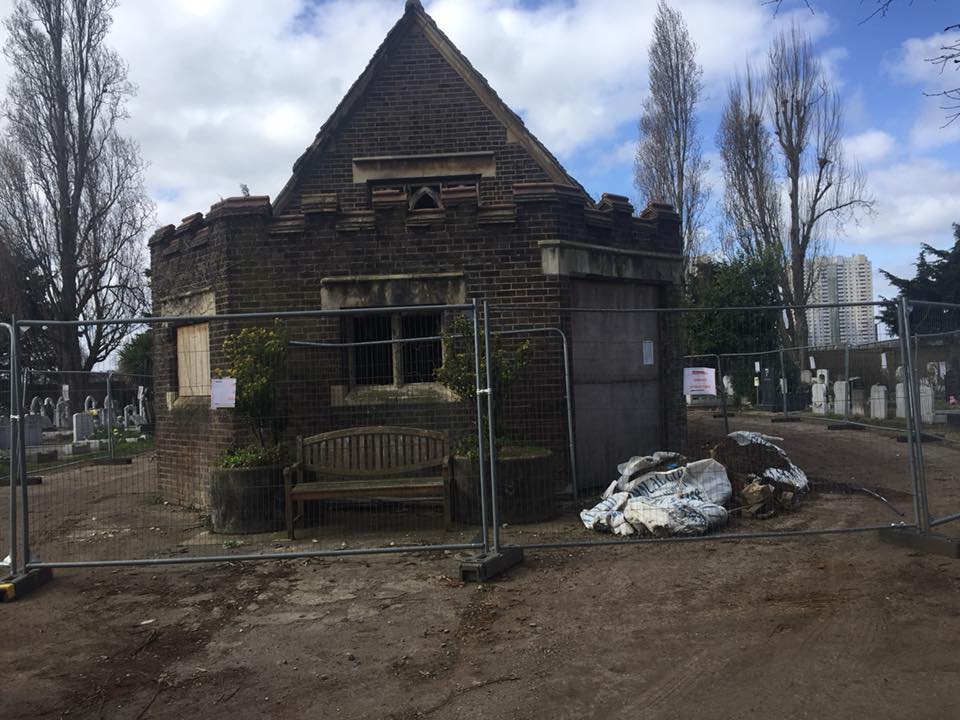 Relatives with loved ones interred at Tottenham Park Cemetery have taken to social media to express their disappointment following the reopening of the burial guard on 19 March. The North London cemetery had been closed since 16 February after Enfield Council and Health and Safety officers inspected the grounds and found urgent repairs were needed, some of which were felt to pose “a risk to life”.

The public were denied access to the entire site as the landowners, Tottenham Park Cemetery, Ltd and their managing agents, Badgehurst Ltd, set about improving the site in line with a report issued by the Health and Safety Executive. A little over a month after the closure, the landowners had done enough to demonstrate the major risks had been alleviated. This included the removal of a spire on top of a small historic chapel, which was in danger of toppling over, and cutting down several trees which presented a major risk of falling down.

However, many other important improvements had not been addressed. These included mud-based walkways and uneven concrete paths, which now have signs advising visitors about their poor state, along with debris and overgrown weeds across the site.

Several graves, which have toppled over or suffered significant damage also had signs attached to them advising the leaseholders to take immediate action to rectify the damage. Failure to do so could allow the landowners to take over the grave.

Those who visited the site posted comments about the poor state of the cemetery on a Facebook group for the Tottenham Park Charitable Trust (TPCT). One relative said: “Just back from the cemetery and to be honest apart from these signs everywhere I did not see any improvements other than a couple of trees at the back cut.”

Another, whose grandparents and parents are buried there, blasted it for being “Crowded, rundown and a disgrace”, while one lady lamented about the huge difficulty in accessing graves: “My mother is now elderly and frail she is unable to walk outside unaided and without her wheelchair. It has been 4 years since she has been able to visit my father’s grave. It is virtually impossible to gain access to the location of the grave due to the fact that the path is basically non-existent. Wheelchair access needs to be taken into consideration.”

A post by Nick Halebi, a councillor in Chingford who has been vocal about the cemetery, urged people to: “write to the Health and Safety Executive complaining about the poor standards of paths and [to] point out there is no provision for disable [sic] people (the law requires adequate provisions for disable people ) as far as I can see they do not exist in Tottenham Park Cemetery”.

When the cemetery reopened, a message on the Tottenham Park Cemetery website that the site would be closed again in future to allow further repairs:

“Please note that we will be closing periodically for maintenance.  Please check this website for up-dates before visiting the Cemetery.”

Dozens of British Turks have complained to Enfield Council and their local MPs about the multiple issues at the privately-owned cemetery off Montague Road in Edmonton. It is the largest burial ground for the Turkish community in Britain, with thousands of people of Turkish and Turkish Cypriot heritage laid to rest there.

The TPCT, a 25-year-old organisation formed to represent friends and family of those buried at the grounds, has been spearheading the current campaign to improve standards at the cemetery.